The month is October, BlizzCon is right around the corner, and we have lots and lots to talk about the game called Hearthstone at the moment. And that includes the upcoming expansion as well of course!

As the Year of the Dragon comes to a close, the ongoing conflict between the League of E.V.I.L. and the League of Explorers soon will culminate. Thanks to the year-long storyline of the current Standard year, Blizzard will be able to once again pick up on cross-franchise storytelling as well as adding even more depth to Hearthstone’s lore.

But what are the possible settings for 2019’s final Hearthstone expansion? Which information should the community pay their attention to, especially when looking at other Blizzard franchises?

First of all, let’s take a step back and look at what we know so far, which is, quite frankly, almost nothing: At the start of 2019, Team 5 posted the usual expansion teaser triptychon, showing three images, one for each 2019 expansion.

Back in March we already tried to decipher the Year of the Dragons hints using only these teaser images. Looking at the third teaser we still feel a very dragon-heavy vibe, and that could’ve meant pretty much anything, not knowing anything about today’s Hearthstone plot.

What started as a vague trip involving the Kirin Tor turned into the year-long rivalry between the League of E.V.I.L. and the League of Explorers. However, not many dragons joined the fight; only Kalecgos and Nozari have been printed, two comparatively minor characters of Warcraft lore.

Another very popular theory hints at the Iron Horde, a radicalized group of orcs lead Grommash and Garrosh Hellscream. The art behind the expansion teaser image reminded many of the Warlords of Draenor expansion of World of Warcraft that featured the rise and fall of the Iron Horde. But similar to the dragon theory, orcs haven’t played a major in the recent happenings of the Hearthstone storyline either.

After looking at a very vague expansion teaser image, what would make more sense than examining the actual storyline of the current Standard year to predict what comes next?

As already said, the conflict between the League of E.V.I.L and the League of Explorers will find its end, one way or the other. In Tombs of Terror, the single player campaign of Hearthstone’s latest expansion Saviors of Uldum, adventurers have to fight different plagues and other creatures corrupted by Rafaam and his lieutenants.

In the last wing of the campaign, players encounter Tekahn, leader of the Neferset tol’vir and Rafaam’s right hand in Uldum. With The Final Plague?!, he summons the four Old Gods cards, showcasing the true power of Rafaam who seemingly agreed to pact with the darkest villains available in the Warcraft universe.

Both Rafaam’s unknown potential and the history of Uldum point towards one of the two current fan theories: Deathwing. Looking back at the storyline of WoW’s Cataclysm expansion, the zone of Uldum seemed to be one of Deathwing’s top priorities after he had been unleashed on Azeroth once again.

In fact, the Shattering caused the Skywall – one of the four elemental planes – to leak, and as a result, Al’Akir and his elemental air minions went wild in Uldum. Deathwing decided to ally with Al’Akir and the Neferset tol’vir to take control of Uldum and its sacred titan machineries including the Forge of Origination, a device that could turn Azeroth as a whole into ashes.

A Look at Cross-Franchise Promotion

The general art behind the last expansion teaser and the looks of the Black Dragonflight would fit together very well, and current Hearthstone hints only support the claim of a possible return of Deathwing. And not only that: Other Blizzard franchises just recently picked up on one of the most iconic character storylines of Warcraft. 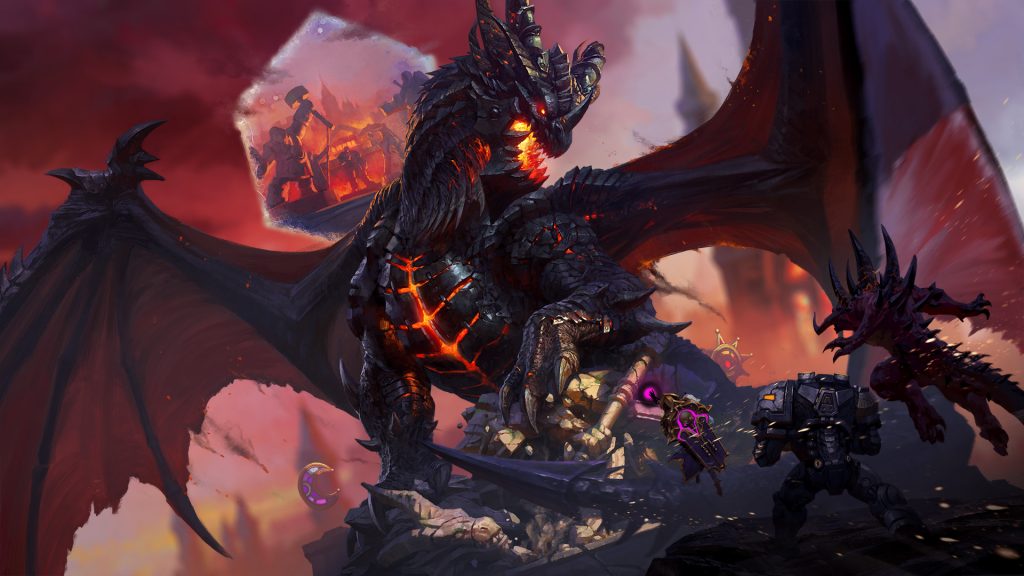 Heroes of the Storm, Blizzard’s MOBA game, recently announced Deathwing as a new playable hero and will present an in-depth feature at BlizzCon next week.

The cross-franchise nature of HotS makes it hard to predict a correlation between hero releases and future content in other games; however, recent years and BlizzCons showed that Team 1 always tried to develop towards storylines and plots in other Blizzard games. Another reprint as well as story focus on Deathwing in Hearthstone would turn interest towards both HotS and Hearthstone.

But what about Blizzard’s flagship title, World of Warcraft?

In current World of Warcraft, Deathwing doesn’t play a starring role. At BlizzCon, we will hear about details for Patch 8.3 and a possible expansion announcement, including Sylvanas’ final master plan involving N’Zoth, the Horde and the Alliance.

Who does play a role in the current plot of WoW, however, is Wrathion, son of Deathwing and one of the last known members of the Black Dragonflight, the group of dragons that perfectly fit the expansion teaser art. In Mists of Pandaria, Wrathion led players through the storyline of WoW’s third expansion.

In Hearthstone, Wrathion has been released during Mean Streets of Gadgetzan, the first expansion with Hearthstone-exclusive lore. Nobody really knows why he appeared in this set, and that would make a reprint even more interesting since he had been in Blizzard’s card game already.

In Battle for Azeroth, Wrathion secretly returns and currently is on the search for a cure against the corruption of the Old Gods that also took his father ages ago. He’s eager to find the Dragon Isles as well, one of the most mysterious places in Warcraft lore. Once planned as a raid during Wrath of the Lich King, this place of interest may have been the most anticipated setting for future WoW expansions in the last years.

In Battle for Azeroth we have seen multiple homages to the initial Dragon Isles concept art who hinted at Old Gods influence from the very start, and BfA’s evolving storyline around N’Zoth turned out to prove that these temples had been there for a reason. Besides that, we know for a fact that many dragonflights have been more active than before during BfA.

Wrathion’s appearance in BfA – if you can call it that – has been more mysterious than anything, but it could just be enough to tell the start of the next big chapter in World of Warcraft.

Maybe we will see the Year of the Dragon finish its storyline on the Dragon Isles, a place that Deathwing, Wrathion, Rafaam, the League of Explorers, and – first and foremost – all Warcraft fans would have huge interest in?

Many Hints, No Trace

Besides the Dragon Isles, many other places of interest found their way into the common WoW leak postings weeks prior to BlizzCon.

The main reason we pay so much attention to the World of Warcraft storyline this year is because we have seen a Hearthstone expansion set very close to WoW at last year’s BlizzCon, Rastakhan’s Rumble. However, it will be pretty wild no matter how Team 5 tries to weave current WoW events into the ongoing Year of the Dragon storyline. And that makes the fact that we have not seen any major Hearthstone leaks even better!

At the start of the year, we thought that the year-long and intwined story of Hearthstone’s 2019 would make the pre-BlizzCon guessing game much easier, but it really didn’t.

Deathwing, Wrathion, Dragon Isles: Everything seems possible after a group of super-villains captured Dalaran and turned it into a giant airship. Rafaam’s powers seem unmatched in the Hearthstone universe, and the League of Explorers soon might need more help than they would like to admit.