If you’re anything like me, then reveal season is your favorite time of the year (alongside the first days of a new expansion). With nothing figured out, new cards coming every day, wild theories and early deck builds (which most likely won’t work) popping up everywhere, and that surprise when you look at some card and think to yourself – “what were they thinking when they’ve designed it?”

I’ll take a closer look at them in this article, reviewing them and rating from 1 to 10. The scale itself should be quite obvious, but just to quickly explain how do I see it: A card rated 5 is average – it might be playable in some decks, but it’s nothing special (think something like Plated Beetle from Kobolds & Catacombs). Cards below 5 might see some play in off-meta decks, or as obscure techs, but the closer we get to 1, the lower chance it is that they will see play. When I rate card 1 or 2, I don’t believe that it will see any Constructed, non-meme play at all. On the other hand, going above 5 means that I see this card as something with a lot of potential. While I can’t guarantee that it will work out in the end, I believe that the cards with 6-8 are likely to see at least some Constructed play, while cards rated 9 or 10 are, in my mind, nearly sure hits. 1 and 10 are reserved to the worst or best cards I can imagine, meaning that they won’t be used often.

Remember that with only a few cards seen, it’s incredibly hard to review them accurately, since we have no clue what other cards will be released, or how rotation will shape the meta. I advise you to pay more attention to the description than the rating itself – I will try to explore some of the potential synergies and reasons why a given card might or might not work. I also encourage you to share your own predictions and reviews in the comment section. Even if you aren’t sure, don’t worry, no one is! There is nothing wrong about being wrong, I have never seen anyone who nailed most of the card ratings before the release. But, without further ado, let’s proceed with the reviews! 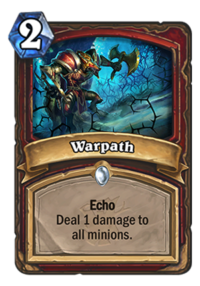 This card is really strong. While I don’t think it’s on the power level of Sleep with the Fishes (which is leaving Standard), it is actually much more flexible. Not only it doesn’t need any activator, but IT can serve as an activator. So, this card is basically 5 cards in one, depending on which one you need: 2 mana 1 AoE damage, 4 mana 2 AoE damage etc. For example, at 2 activations it’s a 1 mana more expensive Volcanic Potion and at 4 activations it’s a bit like one mana more expensive Flamestrike (obviously, damaging your own side of the board can be both advantage and disadvantage depending on the board state).

The card has special synergy with other Warrior cards. For example, you can use it as an Execute activator if you need one. Warrior is also known for using cards that benefit from self damage. Acolyte of Pain is probably the best example. For example, playing Acolyte + this card three times on Turn 9 is a 3 damage AoE + drawing 3 cards. Which means that you’ve dealt 3 AoE damage, but instead of spending a card you’re a card up. It doesn’t necessarily seem best, but the thing is, that’s just one of the uses.

One important thing to remember is that it doesn’t deal all the damage up-front. That’s a big deal, and one of the reasons why Defile is so strong. For example, straight up 4 damage wouldn’t clear a Divine Shield minion – it would just pop the shield. This would pop the shield with first activation and then still deal damage to the minion itself. Same goes for Deathrattles – Paladin Adapts his Silver Hand Recruits to summon 1/1’s on death? Well, you can easily clear them both with this card.

The obvious downside of this card is that for its flexibility, you have to pay the hefty price – in mana crystals. Basically, at every step, the card is 1 or 2 mana more expensive than similarly working card (even more at 10 mana, because for 8 you can just clear the whole board with e.g. Twisting Nether). The upside, on the other hand, is damage being dealt in steps and the flexibility.

Another problem might be the state of Warrior class. Right now, Control Warrior is in a TERRIBLE spot, and the class is losing some key cards in the rotation, so they would have to print some really broken cards for it to see play. It also can’t be used in the Baku the Mooneater deck, if that will be a thing, obviously.

I’m already rating this pretty highly, but it can be even better IF they print something that synergizes with damage and Control Warrior wants to play. Because Rotface doesn’t count – it costs 8 mana so you can’t combo it with this card, and it will pretty much never survive until next turn. 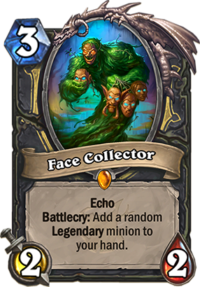 At this point I think that Blizzard is making fun of Rogue players. And I don’t mean that the card itself is bad. It’s just yet another card that could actually be powerful in another class, but not in Rogue. No viable Rogue deck in history wanted to play cards that are super low tempo and give you more value. Rogue was always about the tempo or combo tactics. About efficient minions/removals (tempo strategy) and cycling through the deck (combo strategy). This is a strictly value card.

But, digressing from the Rogue class for a moment, what value card it is. The best part about it (and well, about any other Echo card too, I guess) is that it’s super flexible. You can play it on Turn 3 as 2/2 that draws you a card. Which is obviously not great, but at least it gives you a body on the board, which can sometimes be useful vs faster decks. And vs slower decks, you could keep it for the late game and get three random Legendaries out of nowhere.

It gets even better if you combine it with Shadowstep. For example, you can play it three times then Shadowstep one of the copies. While you’re left with only two on the board, next turn you can play it FOUR times. How crazy it is? You spend two cards and end up with a bunch of small minions on the board and a hand full of Legendaries. That’s really cool. If you play a slow deck vs a slow deck, those few extra Legendaries really do matter and can give you an edge in the long terms value war.

One more thing worth mentioning is how random this effect is. When reading “Legendary” you immediately think of powerful stuff, like The Lich King or Alexstrasza, or maybe Archmage Antonidas. But the truth is that there is a bunch of weak / useless Legendaries. You have just as high chance to get, I don’t know, Ozruk (without Elementals in your deck), Dragoncaller Alanna (without many, or any high cost spells in your deck), Lynessa Sunsorrow, Millhouse Manastorm etc. You get my point. Random Legendary sounds great on paper, but it’s not always good. It has a chance to draw you a bunch of useless/situational cards that will stay dead in your hand. We got so used to Discover mechanic that we sometimes don’t consider how random the “truly” random effects might be.

So, as much as I like it and I’ll probably play it in some meme deck if I open it, I don’t think it’s going to be good enough in the context of its class. Control Rogue is not a thing. Rogue cards just don’t support this kind of strategy. The only way for this to really see serious play is if Blizzard goes balls to the wall and decides to print a full expansion (or two.. or three..) of powerful Control Rogue tools. But so far, Control cards for Rogue were mostly outliers – because that’s just not the class identity.