If you’re a cat person, this might interest you! Players have found out that there’s a cool Easter Egg in Scholomance Academy (I’ve found out about the interaction from guouey on Twitter, but I’m not sure if he’s the one who discovered it). Some of the players were upset that Mr. Bigglesworth, Kel’Thuzad’s pet cat, wasn’t available as a playable card in Scholomance Academy. And while it’s true, you CAN technically play him in Constructed, but getting him is not that easy.

Here’s how the card looks like. It has the same stats and cost as Snowflipper Penguin, so it’s not likely going to win you games or anything, it’s just 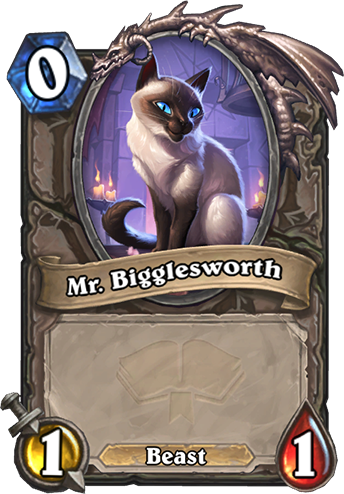 But how do you get it? Well, it’s simple (okay, it’s really not). You need to have Headmaster Kel'Thuzad and at least a few cat (we don’t exactly know how many you need). For example – Alleycat, Springpaw, Escaped Manasaber or the new Manafeeder Panthara. Basically, cards depicting cats should work, but again, since it was just discovered we don’t have the full list yet. Playing one triggers Kel’Thuzad’s special voice line – “Kitty, kitty”. That’s when you know you’re on a good track. Now you need to fill your board with them and you will get Mr. Bigglesworth token in your hand.

Here’s a video showing how to do it:

This is the easiest way to get it????. pic.twitter.com/yGMl18bSqo

While I with that Mr. Bigglesworth would be a card you can put into your deck, this is also a cool way to add him to the game. It’s great that players have found it out so quickly!