Good news, everyone! The nerf patch hinted at 2 days ago has just been announced. The two nerfs “leaked” on Mike Donais’ stream also turned out to be true, but on top of those, we’ve got three more cards getting changed. One of which is a Wild card, something that hasn’t happened in a while (last time a Wild card was changed was Aviana in Boomsday Project (a year ago). Also, two of the “nerfs” are basically reversed buffs. For the most part, cards buffed a couple months ago during the Rise of the Mech event turned out to be quite balanced, but some of them ended up too strong. Still, it’s better to try and fail (especially since any mistake can be fixed like it is now) than not try at all!

The nerfs will go live on Monday (August 26), most likely not to disrupt the beginning of Grandmasters Season 2. 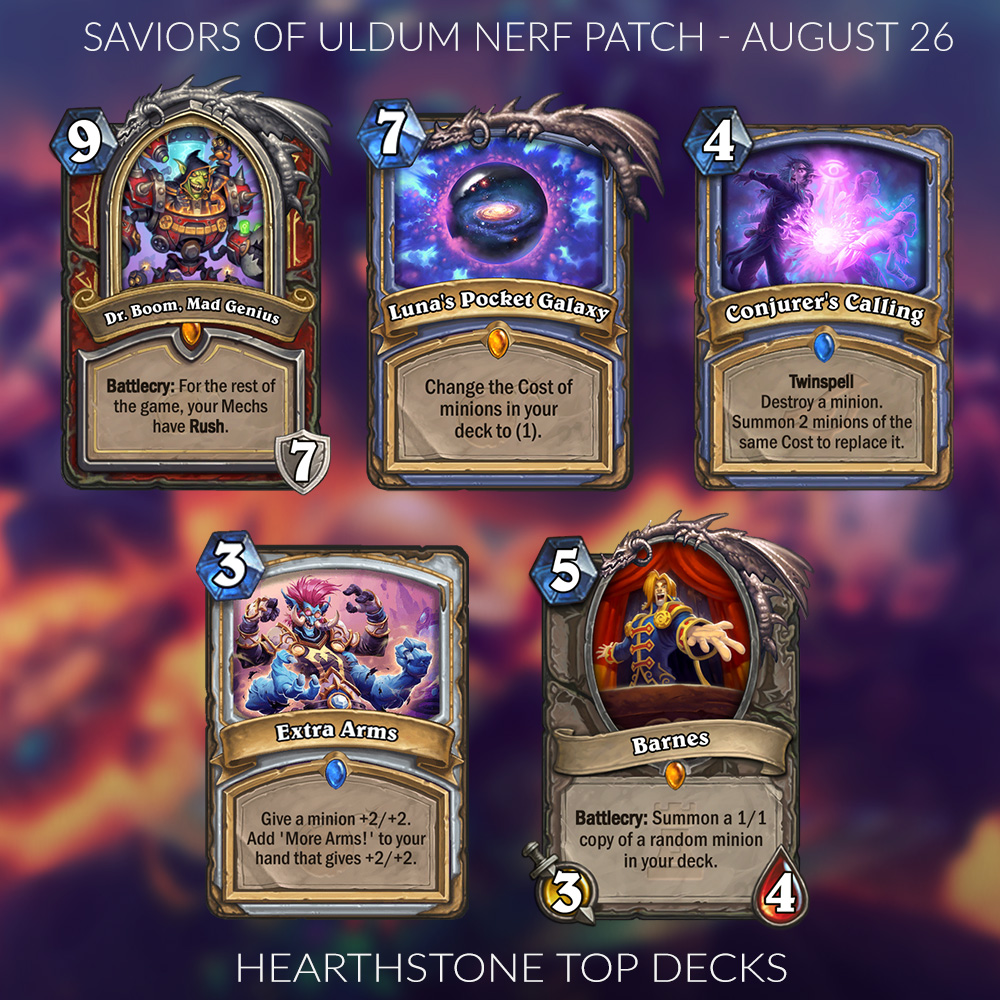 For more details, such as the specific reasons why those cards were targeted, check out the official blog post below!

Now that Saviors of Uldum is live, new cards have been introduced and powerful decks have started to surface. To make for a better ladder experience for Hearthstone players in this new expansion, we’ve decided to make the following card adjustments in an update next week:

While Conjurer’s Calling is a powerful tool that’s found in a number of Mage decks, when used in decks focused around cards like Mountain Giant and Sea Giant, it was creating extremely powerful board states at a point in the game where opponents didn’t have effective answers.

Increasing the mana cost of this card will make using both copies of the Twinspell card in a single turn significantly more difficult, postponing these potentially overwhelming turns until later in the game when the Mage’s opponent has more available resources to react to the board.

Buffing cards with the Rise of the Mech event was a big change in philosophy for us. While we are happy with the overall outcome of the changes, Luna’s Pocket Galaxy has proven to be an exception.

An early Luna’s Pocket Galaxy can often leave opponents feeling helpless if late-game minions were drawn in subsequent turns. This has occurred more often than we had intended, therefore we’re reverting its mana cost back to its original value of 7, as was the case before the Rise of the Mech event.

We’d still like Dr. Boom, Mad Genius to be a great option for control Warrior decks looking to close out games, but right now the card gets played a bit too early. Increasing the mana cost to 9 should make it more difficult to find a good turn to play Dr. Boom, giving opponents time to make powerful plays as well.

During the Rise of the Mech event, Priest was one of the weaker classes in the game. Buffing Extra Arms gave Priest a powerful spell for the early game to enable some of their board-focused strategies.

With the release of Saviors of Uldum, Priest has access to many more powerful early game minions and has seen a large jump in both popularity and winrate. Between all of Priests buff spells and heal effects, it can be hard to fight for the board against them early in the game. Increasing the mana cost of Extra Arms back to 3 should give room for other decks to challenge them early on, while leaving the powerful Priest minions and combos untouched.

Barnes has been a hot topic in Wild format discussions for quite some time now, especially regarding how oppressive this card can feel when facing certain Priest decks.

While we’re okay with Wild having a higher power level in general, Barnes stood out as too consistently powerful early in the game. Increasing his mana cost by 1 will let opponents have an easier time reacting, but still lets Barnes retain its identity as a way to summon specific minions early in the game.

Be sure to let us know what you think of these upcoming changes on the official Hearthstone Forums. We’ll see you in the tavern!