In many ways, the League of Explorers serve as the definition of peak Hearthstone. The first fully unique take on Warcraft lore with memorable characters and well-designed cards corresponding to them, LoE remains a much-loved part of the game’s history and it’s no surprise its cast of characters were brought back wholesale to carry the storyline of the Year of the Dragon. The adventure also brought along Discover, a new keyword which only could make sense in a digital card game, one which remained a cornerstone of the game ever since, and some incredibly unique encounters in the solo content which essentially carried the experience by themselves.

/u/DiabloGraves in the announcement discussion thread

Turns out an easy way to generate hype for the new solo content is to drop it like it’s hot with only five days’ worth of advance warning. That’s right, the third adventure in Hearthstone history was the fastest major content release to date, both in terms of the pre-release period and overall as well, with just eighty days separating The Grand Tournament – and its fairly underwhelming reception – from its arrival. To compare, every other major content piece had over 100 days between them if you discount Galakrond’s Awakening from the end of 2019. 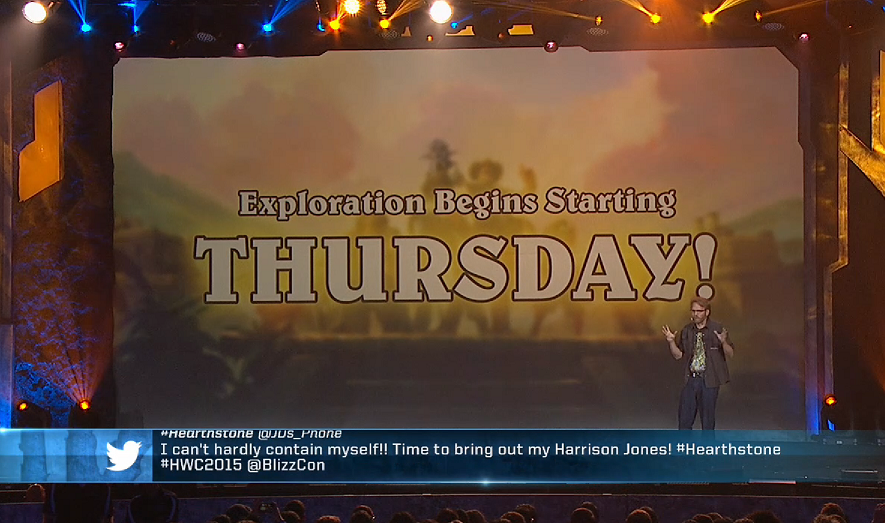 Once again, the solo content itself was more about iteration rather than innovation, with the thirteen encounters now distributed across four wings, each focusing on one of the League members (and Rafaam at the exciting conclusion). This was the adventure which premiered the big unskippable dialogue bubbles, but with much snappier lines and shorter dialogue segments than what would infuriate players later in less well-written solo content pieces. They genuinely serve to enhance the expansion’s strong set of characters, which straddled the line between funny and annoying much more effectively than anything Team 5 put out ever since.

Perhaps the most notable encounters from the first wings are the “PvE” battles where you’re either trying to escape a collapsing temple or to escape Troggs from a mine in a cart that’s appropriately dubbed “super safe” (yes, including the quotation marks) by the game – a concept recently brought back in the Ashes of Outland solo adventure. Since the first two adventures contained five wings each, there was enough space left on the interface to proudly display the Staff of Origination, the MacGuffin of this particular storyline that you aimed to first reassemble then reclaim from the arch-thief-slash-supreme-archeologist, who, of course, has by far the most memorable and awesome PvE battle to his name in perhaps the entirety of Hearthstone history.

“I doubt anything will ever beat the surprise of having Rafaam steal your deck”
“I remember making the conscious decision not to spoil it in our datamining efforts. It was just too awesome to ruin.”

The beauty of this encounter is that the boss’ hero power means that even after you give him an awful deck once you realize what’s going on, you can’t just trivialize the fight by filling it with 10-drops or unplayable cards because of the hero power. It is also just an awesome moment, and the only real downside is that not even the FULL POWER of the Staff can live up to it in the next and final battle, if only because the endless resource generation for both sides has mostly become standard fare by today’s Hearthstone standards rather than a special occasion. 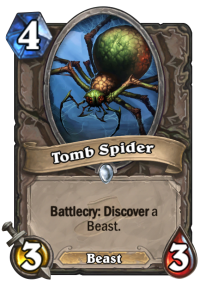 Though Discover has become ubiquitous in Hearthstone over the years, having been featured in every single set since its arrival, its current form is quite different from what we’ve originally got. The initial Discover cards’ power level were capped by one of two considerations: either the pool of potential discoveries were so large that you couldn’t reliably plan on any given outcome (which is part of why class cards had a hidden offering bonus, a design choice Team 5 didn’t let the players know until after community experimentation has shown it to be the case) or they offered low initiative. This was either accomplished by offering a minion as a payoff – not only is that a lot rarer these days, but the Scholomance Academy set’s Studies spells which let you Discover from a specific subset of cards and lets you bank the one mana) show a massive increase in power level compared to something like Museum Curator or Gorillabot A-3.

“If there was ever a card that needed an orange glow when its battlecry condition was met, Reno Jackson is that card.”

The other limit on the early Discover cards’ power level was that the initial body was sometimes so expensive that you couldn’t pop off on the exact same turn with your discovered card – just think Arch-Thief Rafaam or Ivory Knight. It’s no surprise that almost every competitively viable Discover card came in at three mana at most, and the increased power level on the potential outcomes could serve to explain why many of us have soured on a mechanic which was universally beloved at the time of its release – in a way that we haven’t on the expansion’s characters, to such an extent that they were brought back to carry the entire Year of the Dragon storyline. 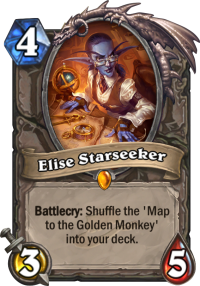 Of the 45 cards from the adventure, sixteen saw serious competitive play, including each member of the League of Explorers – and, yes, even Murloc Tinyfin (which remains inarguably the most adorable card in the game and also the entire universe) thanks to the “Eboladin” archetype. As for Elise and company, there’s a good argument to be made that their enduring appeal had a lot to do with their viability as Constructed cards across many metagames, unlike with Kel'Thuzad or Nefarian (or even Rafaam, who got shafted on two separate occasions).

They were also all interesting cards with each having a very different spin on “breaking” the standard gameplay loop without being overpowered. Sir Finley Mrrgglton’s 1/3 body turns out to be super relevant by itself in aggro decks, and the ability to turn something useless like Armor Up or Totemic Call into Steady Shot or even Fireblast was archetype-defining by itself. Brann Bronzebeard’s value engine was reasonably priced at 3 mana plus the combo requirement, enabling some truly nutty things in control builds further down the line and enabled some really interesting plays even when combined with lower-powered cards.

Similarly, Elise Starseeker’s payoff with the Golden Monkey made sense specifically in Control Warrior where it could transform useless removal tools from the mirror match into random Legendaries – again, this sort of “random resource versus random resource” late game battle was fairly unique at the time. Last but certainly not least, Reno Jackson brought along the highlander requirement into Hearthstone from MTG and it turned out to be a smashing success even with the different sort of deckbuilding restrictions across the two games, with a unique payoff that actually made a lot of sense in midrange-y builds.

Memorable and funny solo encounters, an evergreen keyword and a strong set of cards: League of Explorers was Team 5 at its best. It even brought us the Saviors of Uldum trailer song four and a half years down the line!

Check back next time for a laundry list of complaints about One Night in Development, the sad swansong of Hearthstone’s old-school adventure which was so mediocre not even the banging disco soundtrack could really save it. Barnes, Midrange Shaman, Purify memes, Firelands Portal, annoying unskippable dialogue, a neutered Heroic mode – there’s a lot to cover.