The new keyword of the Murder in Castle Nathria set promises to promote over-the-board gameplay and minion-focused combat. It offers interesting neutral support for token-based decks and a wider focus on sending multiple small minions into battle. This was definitely very much in Hearthstone’s past, but does it still have a role to play in its presence? Whether such gameplay scenarios can regularly play out with our game’s modern power levels should prove to be a fascinating experiment on a grand scale.

With Infuse, Trading Is Scaling 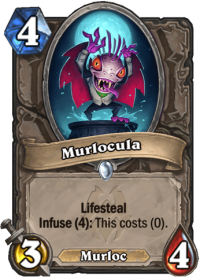 Infuse effects transform relevant cards into a more powerful version after (x) number of friendly minions die while it is in your hand. Much like Corrupt, the transformation of these cards is permanent, meaning they remain “infused” even after you shuffle them back into your deck. This is also signified by a badass art upgrade on the card, often including blood. Oops, no, sorry, Anima! My mistake.

That said, this is about where the similarities end between these two keywords. Corrupt, which was mostly irrelevant in Constructed (especially on the higher-cost cards), came with strict deckbuilding and card-sequencing restrictions for payoffs that were quite frankly not worth the effort. It was also solitaire-compatible, which isn’t the case with Infuse.

Unlike Corrupt, where simply playing out more expensive cards would net you the upgrade, this keyword necessitates over-the-board combat as the sole source of generating value. For Infuse (1) and (2) cards, you can maybe set up some shenanigans strictly off of your hand, but for the real juicy payoffs, you’ve actually got to fight it out with your opponent over the course of multiple turns. Since the effect only applies to friendly minions, you can’t just sit back and lob AoE spells to get things done, either. 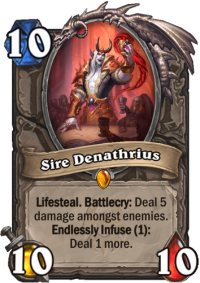 This marks a huge change from a set like United in Stormwind and the sort of gameplay it’s promoted. The joint presence of these two sets in Standard for a short period of time will definitely lead to some awkward moments, and it will be fascinating to see which strategies can make better use of the massive card pool that will be available by the end of the Standard year.

The reason UiS is worth bringing up as a comparison with its Questlines and their corresponding railroaded designs and predictable play patterns is because of just how aggressive Team 5 is this time about promoting minion-based combat with this set.

Prince Renathal is already a very aggressive enabler of such strategies, shrinking the room of hyper-aggressive and OTK-based strategies for burn-based solutions. In fact, all mechanics from the set are working in harmony towards this specific goal of board-oriented play. Locations generate repeated value for a low initial investment over a relatively long period of in-game time, Infuse rewards you for making multiple trades, and even the damage-dealing payoff card, Sire Denathrius (or Kel'Thuzad, the Inevitable), demands a lot of death of minions on your side, scaling up even slower than the original C'Thun did (but offering potentially much larger pay-offs).

To Infuse or Not to Infuse? 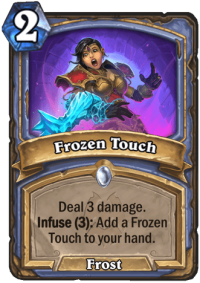 Unlike many past keywords that revolve around upgrading and transforming the card in your hand once a condition is triggered, most of the Infuse cards in the upcoming set seem to have avoided the long-time issue of an unplayably low baseline power level. With cards like Frenzied Fangs, Frozen Touch and Clean the Scene, playing their vanilla versions is very much a legitimate play.

Many times in Hearthstone’s history, this sort of payoff has been academic at best, as you lost out on too much value by choosing the tempo play. Here, however, when everything is a tempo play and the cards come with better stats, making the gameplay somewhat more Arena-like in nature (in a good way – notice how card generation is also very limited in the set, with Discover effects grabbing cards from your deck or offering potential symmetrical results), making it extra worthwhile to gain board control, much more so than it has ever been for the past couple of years.

Of course, how this meshes with the game’s continued power creep – and whether that is a good thing – is a different discussion entirely. Nevertheless, this a far cry from many Frenzy, Overkill and Corrupt cards that simply ended up being too conditional to see any play and Infuse could still become part of this trend under certain circumstances.

A quick look at the most popular theorycraft decks – not that it brings us a strong forecast of the winds that will blow on the day of release – suggests that the decks will indeed focus on this approach, be it the straightforward Totem Shaman build from BabyBear, the Imp Warlock builds,  Thijs’ Skeleton Warlock deck and the multiple Midrange Hunter shenanigans that all seemed more or less viable throughout the promotional streams. Of course, we’ll have some theorycrafts built around Infuse keyword ready for you soon!

Nevertheless, the keyword and the gameplay concept behind it are very nice to see and should, in theory, lead back towards more board-centric gameplay patterns for Hearthstone. However, it still remains a very real possibility that it ends up as something like Honorable Kill or Overkill, keywords with too narrow an application to have real Constructed relevance.