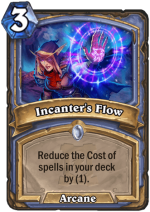 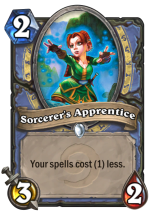 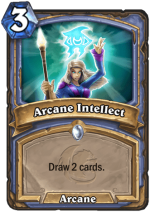 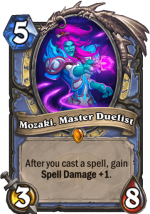 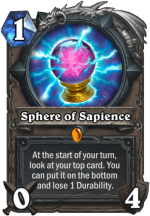 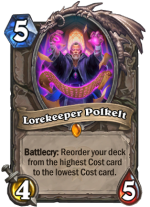 Like most combo decks, Mozaki Mage centers around a few key cards so it makes sense to mulligan aggressively to find them. The three cards to optimize for are Mozaki (your win condition), Lorekeeper Polkelt (which gets you Mozaki on the next turn and stacks the rest of the deck for your combo), and Incanter's Flow (which you want to cast as early as possible to make all your cheap spells free and power your OTK). Sphere of Sapience is also great for helping you find your combo faster.

Against extremely aggressive decks like Face Hunter or Zoolock, it can be worth keeping Brain Freeze or Arcane Breath to help stall the early game. If you get Sorcerer's Apprentice and Evocation in the same hand that's also worth keeping because sometimes you can just overpower the opponent with value. But otherwise, the mulligan guide generally remains the same.

Mozaki Mage is a combo deck of my own design that I piloted to Top 1,000 Legend in under a week and that I’ve consistently maintained a 60% win rate with at high legend ranks over the past week: https://imgur.com/a/wtMocrR

The deck centers around the following combo:

In almost any matchup, if you can cast an Incanter’s Flow and then survive until turn 7 (or even turn 6 if you’re on the coin) with Mozaki, Sorcerer’s Apprentice, and Cram Session in hand, you win the game. You play Mozaki and Sorcerer’s Apprentice, drop as many spells in your hand as you’ve got, play Cram Session to draw a bunch of cards, play a bunch more spells, play your second Cram Session to draw out most of your deck, drop every last spell you can (including several removal spells to clear your opponent’s board), and then slam the opponent with Frostbolt and Arcane Missiles for a One Turn Kill (OTK). If you’ve got the extra mana, you can play 1-2 Violet Spellwings and kill them with your own free removal spells to access extra Arcane Missiles to push even more damage. And because so many of the 1-cost spells that power the Mozaki combo also function as cheap removal and/or minion creation, they serve perfectly to stall the early game until you are ready to go off with your combo. Finally, you’ve got Sphere of Sapience and Arcane Intellect for extra card draw, and if you’re lucky enough to draw Lorekeeper Polkelt in the early game and play it on curve, then the combo is guaranteed to work because you can Arcane Intellect into Incanter’s Flow to make all your 1-cost spells free and into Cram Session to power Mozaki.

The deck is incredibly fun to play and absolutely wrecks most control builds. The one exception is Bomb Warrior, which can screw up Lorekeeper Polkelt by shuffling bombs into your deck, but I’ve maintained a nearly 50% win rate even against Bomb Warrior by using Frostbolt’s to freeze the opponent during the critical midgame turns. The weakest matchup is Face Hunter, but by stacking the deck with Mirror Image and other cheap defensive spells, it runs better than breakeven even there.

Hope you enjoy, and would love any feedback on how to make the deck even better!