Learn how to play this archetype with our Tempo Mage Deck List Guide.

Yogg-Saron continues to demand to be taken seriously, this time in a deck that makes plenty of sense: Tempo Mage! The deck has been gaining in popularity, and with the recent success Hotform has had with it, we might start seeing it more frequently on the ladder. Thanks to Hotform for allowing us to re-host his guide, be sure to check him out on Twitch!

Salutations! I am Hotform, I was the second place finisher at the Hearthstone World Championship last year. I am here today to present my #1 Legend Yogg Tempo Mage Guide.

This is a Mage deck which focuses on using damage spells and spellpower creatures to control the early board and work towards a kill.

The deck has enough damage spells to deal with your opponents creatures consistently, while at the same time generating a card or board advantage.

This deck struggles against control decks which use a lot of removal and healing tools.

The creatures in this deck tend to be small in size, spells are used in place of creatures to trade. This means that opponents with a lot of removal tools can leave us with an empty board.

This deck is a Random Damage based deck. In using this deck you will often find yourself with a gamble on killing the opponents creatures. When these situations occur where you need to gamble on Random Damage there are a few conditions I like to think about before I choose:

Chance of Success: What’s the chance you actually get what you want?

Risk vs Reward: Was the good outcome substantially better or mildly better than the bad outcome?

What position are you in?: Are you winning or losing the match? If you are behind, gambling becomes a better option even when the odds are unfavorable.

I will talk more about this card in the card discussion near the end. The basics of it is, you use this card to accomplish what nothing else could… some of the time it works. In general it will be a good card to play, is it good enough to recover from the position you felt comfortable playing Yogg in? That will not be as often; but this is a card which is an important function to get the winrate you need.

This is a deck which boasts a lot of card draw and a lot of direct damage. Taking risks on being able to close out a game by dealing damage before you have the kill in your hand gives you wins that you could not otherwise achieve.

An example of this is playing a Fireball on Turn 6 so that you can draw either Fireball or Arcane Intellect into Fireball to get lethal damage.

Making sense of when it is worthwhile to commit to killing your opponent is a game by game decision based on your odds to win.

There are three types of cards for mulligans. Cards we keep, Cards we don’t keep, and :

Conditional Cards (CC): Cards that we keep if we have other good mulligan cards, or specific synergy in our hand already.

Get an early board and remove the Druid’s creatures with spells, pressuring Face with your creatures.

Clearing the Druid’s creatures each turn is a priority.

Keep spells, every Hunter plays creatures. Use your spells to kill the Hunter’s early minions and find a tempo advantage on the board.

With a couple of creatures down go face and win with burn. Hunters don’t heal themselves.

Lots of Subtle differences makeup this match. Card draw mechanics are important and complex in timing, pay attention to your options and what you can draw.

Our version of Mage is offensive in comparison to most.

We want to force the other Mage to be defensive early by having a quick pace and using our spell synergy creatures to setup maximum burn damage.

Late game Paladins are a challenging fight with their healing. Work with the board to maintain small advantages and get card value.

Early pressure is key. Priests are not as adapt at healing themselves as Warriors or Paladins. The early pressure on the Priest’s face makes their turns harder later.

Yogg clears the board and the Priest can run out of cards.

Rogues have no way to heal themselves. Getting some initial creatures can create pressure but if the Rogue removes our board we can slow the game down. Deal with the Rogue’s creatures until we can amass a good burn setup.

Similar to a Hunter matchup, every Shaman plays creatures. We want to kill the Shaman’s initial three creatures while developing our own board.

We use our spell synergy mechanics especially with Arcane Blast, Frostbolt, and Forgotton Torch to deal with the Shaman’s plays.

After getting a few creatures go face and burn. Shamans don’t heal themselves.

Zoo Warlock is the most popular by far, getting one creature on the board early beyond the Warlock’s reach and then maintaining this small advantage will win the match.

Warlocks get very low health on their own, keep an eye out for face damage opportunities to steal a victory.

Keep card draw moving at three or more cards in your hand.

Midrange and Aggro Warriors are strictly board control and playing out your creatures quickly while removing theirs. The lack of brawl from these decks mean that a flood of smaller minions can create a quick victory for a Mage.

Control Warrior is what I consider the worst matchup. Card draw is important to keep around. Try to setup a very quick board or a maximum spell damage board.

When you have two or three spell synergy creatures on the board start going face with spells. Look to maximize your damage regardless of the Warriors health. A Mage can get through 40 Health in two turns, the armor is not impossible. 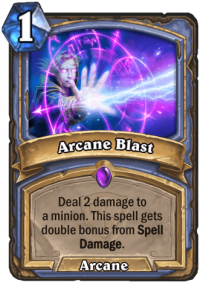 Arcane Blast: This is a card that gains you a mana advantage (Tempo). Combined with spellpower this card does the most efficient damage per mana. Keep it around often, it is a prime tool.

Arcane Missiles: The evil version of Arcane Blast. It’s worse most of the time but it can hit multiple things making it invaluable in certain situations. It also goes face for the same damage as Frostbolt. Love it or hate it, random damage is efficient damage at only one mana for three damage.

Mirror Image: Not useful all the time but a very important tool in match-ups against weapons. A good filler spell and trick up a Mage’s sleeve that has synergy with the Mage mechanics. This is a Tempo mechanic; putting down 4 hp for 1 mana, and it almost always absorbs more than 4 damage.

Mana Wyrm: Best one drop around.

Bloodmage Thalnos: With so many spells and card draw mechanics, it is only natural to take the combination of the two. Often good to use as a development on the board like any other two drop.

Cult Sorcerer: 3/2 for two mana is ideal for Mage, damage is the most important factor on creatures for us so that we can trade up. Spell power and a 3/2 is a great creature. 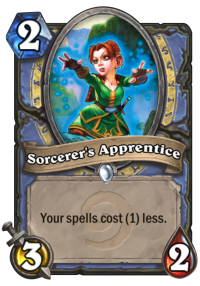 Arcane Intellect: We have low mana cards, so we need to draw a lot of them.

Forgotten Torch: More damage, fills in well to give us a big damage boost across our deck. This spell is part of the reason we run so much card draw.

Acolyte of Pain: More card draw. Synergy with the Mage hero power. Develops the board while being resistant to clears. Consider this the best thing to play directly on turn 3.

Flamewaker: This creature is fine in the early game, it has 2/4 stats which is very competitive for a 3 mana creature. But this creature is best played turn 5-10 when multiple spells can be played at once. It is in a lot of ways like +2 spell power. Consider that the damage that “misses” does go somewhere, and with all our burn damage, you always want to play this creature with as many spells as possible. 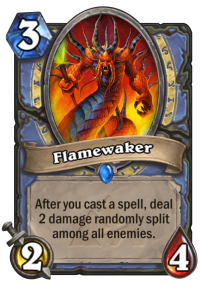 Fireball: Four mana six damage, awesome. With +1 spell power and a hero power it kills 8/8 creatures so we never have to trade. With so much damage in the deck look for opportunities to use this on the board; killing a three mana creature is not a bad choice.

Water Elemental: Highest HP creature in the Mage deck. The freeze is amazing and the stats on the creature are phenomenal. You could play additional four mana creatures, but I would never take away Water Elemental.

Azure Drake: Spellpower synergy and card draw. What makes this creature so much better than other five drops is it’s ability to give us a spell combo turn on turns 6 and 7.

Yogg-Saron, Hope's End: This creature is the all in one late game package… at a price. You will find when playing a spell deck like this that you will be in situations where no single card could save you from defeat, except for our Lord and Saviour Yogg-Saron.

The more spells you have cast the better, every spell counts.

The ideal situation to play this, is when your opponent has creatures on the board and you do not.

This card is pretty crazy, you’ll have to try it out to get a good feel for it. But suffice to say you do not play this all the time, use it when it will help you out.

This concludes my Yogg Tempo Mage writeup. To me this deck is successful but also math intensive. It requires a good understanding of probability and fractions to use correctly. It is also a deck that involves gambling. A safe playing individual may not enjoy this style of deck; but the victories are there for those who do, because Hearthstone rewards risks.

You can find me at: