Control has been kind enough to allow us to re-host his Midrange Shaman deck guide (Vlps’ deck). Check him out at these fine websites: Twitter, Twitch, YouTube.

This is Vlps’ Midrange Shaman list that he used in conjunction with Control Warrior to hit rank 16 last season. The next golden class I was looking to get was Shaman, and his list looked appealing. So I started using this deck at rank 3. Climbed to legend on stream with it that same night. My highest rank with this list this season is 111.

Here’s a video I made talking over slides explaining everything that’s written here. I use a lot of pretty pictures here, and you can see my face KappaPride. I figured I’d make a rough write up because a lot of people don’t like listening to my annoying voice for 20+ minutes.

I: Introduction To The Deck

This is a Shaman list that focuses on board control, and slowly pushing for a kill around turn 6-10+.

Pros: Aggro Shaman’s start, Totem synergy (0 mana 5/5), No one expects 18 damage Al'Akir the Windlord combo t10. Can play into AOE, then refill the board quickly.

Cons: Mage/Druid usually dumpster us. Skipping t1-3 and only using hero power usually means we lose. A bit inconsistent because we only have 1 true 2 drop. (Totem Golem). 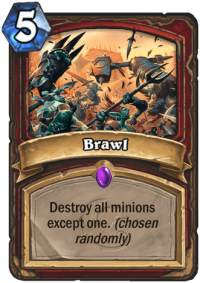 Know how your opponent can clear your board, and how you come back after that. If your opponent has Brawl/Flamestrike/etc, then save Thing from Below at (0-3) mana to use post AOE to begin refilling the board. Sometimes hero powering + a cheap minion can be better than something bigger to set up for a Thing from Below.

You really want to know what kind of board clears your opponent has. Without that information you can’t play this deck as efficiently as you’d like.

Overload/Totem discount are very important aspects of this deck. Always think about your/your opponents turns ahead.

As a general rule big minions go on the left, mana tide the very left. Flametongue Totem in the middle so you can bounce it down all your totems/cheap minions.

You can keep 3 drops in your opening hand going first if you have t1/2 plays. Otherwise I’d suggest mulliganing them. In general, you always want a t1/2 play. Keeping Rockbiter going first sucks, but you have to when your opponent can start with 1/3’s/, 3/2’s etc.

Develop a board and keep it. Save Hex for Ancient of War/Dark Arakkoa. Save a Lightning Storm for Wisps of the Old Gods if they’re Yogg. Play around Deathwing vs. Ramp Druid if your opponent has kept a card in their hand on T10+ for a long time.

Try to play around Unleash the Hounds as best as you can. Rockbiter is a great way to deal w/ their 2 drops. Care for Deadly Shot of Dr.4. Save Hex for Savannah Highmane. Keep Azure Drake/Lightning Storm combo to answer Call of the Wild if you can. Aim to have a big enough board that CoTW doesn’t do too much on t8.

Tough matchup. Spellpower+Arcane Blast destroy Totem Golem. Play around t7 Flamestrike, and have ways to refill the board quickly eg: Tuskarr Totemic + Thing from Below. Rockbiter is great vs Mana Wyrm here. Hex anything you’ll have a hard time dealing with. Freeze mage needs to draw really poorly for us to win. Play super aggressively vs them, and try to get as much damage in as possible. Then win with an Al'Akir the Windlord combo late.

Play aggressive so you force them to have Equality+Consecration/Wild Pyromancer. Look to refill the board and do the same thing over and over again. Hex is great vs the N’Zoth lists.

Annoying matchup. They have a ton of AOE, so don’t overextend. Still play fast and on curve early to force them to have the removal. Try to win with Thunder Bluff Valiant later on after they use the majority of their removal.

Pressure these guys as fast as possible. If you curve out there isn’t much they can do. Be wary of Sap on Dr.4. Get board and keep it.

Our list is greedier, so we win later on most of the time. Harrison Jones can win the game vs. any list with a Doomhammer. Need to get good Lightning Storm value out of both here. Usually whoever gets the Trogg+Buff cards out first end up winning.

Get insane value out of Lightning Storm, then stabilize after is usually how we beat Zoo. Hex is fine to use of their 3 drops. If we lose board and don’t get a Lightning Storm we will likely lose.

Tempo/Aggro/Dragon is kind of annoying. Look to get Harrison Jones value, and curve out well. Totem Golem requires more than just a war axe, so it’s a great t1/2 play. Against Control lists just over extend enough so they use their brawls/revenge. When they’re all gone use Thunder Bluff Valiant to buff your totems to a victory!

Thanks for reading/watching the guide. I’ll probably change my opinion on some of the information here as I get some more games with the deck. That being said, it should serve as a decent starting point for anyone looking to pick up midrange shaman. Also, if Vlps says anything about this deck that conflicts with what is written here side with him.

Not too sure if I can post twitter/twitch, but check me out on YouTube for sure! I upload daily gameplay videos which are currently with this deck.

More importantly, check out Vlps on twitch, and twitter. His twitch vods are a great way to learn how to play different matchups correctly.

I straight up copied Hotform’s tempo mage guide layout. Feel free to check him out here.