Our Turtle Mage deck list guide goes through the ins-and-outs of this new board-locking Mage deck in Scholomance Academy! This guide will teach you how to mulligan, pilot, and substitute cards for this archetype! 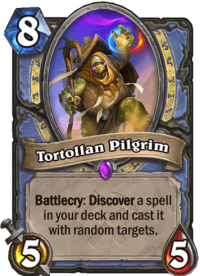 When you build a deck with only three different spells in it, Tortollan Pilgrim will always allow you to choose between them when played, and Potion of Illusion allows you to chain one-cost Tortollan Pilgrims over and over again. In practice, the deck uses Blizzard and Frost Nova as the other two spells, which means that Turtle Mage can make copies of their minions and freeze the opponent’s board almost endlessly. Once the combo begins, it is almost impossible for minions to touch the Turtle Mage player ever again and Turtle Mage’s minions will slowly grind out the health of their hapless victim.

There are some caveats included. Turtle Mage is a deck that relies on not drawing some of its key cards: for example, should you draw both copies of Potion of Illusion, you can no longer chain one-cost Tortollan Pilgrims. That said, the deck has a number of tools to help prevent unwanted draws and you rarely need to chain Tortollan Pilgrims for more than a few turns anyway, so you are able to do the things you want in most of the games. The main vulnerabilities of the deck are fast aggro decks that could not care less about some eight-cost minion you might have in your deck and OTK combo decks that do not care about having their board frozen. Anything in between is ripe for turtling.

Check out alternative versions of this deck on our Turtle Mage archetype page! 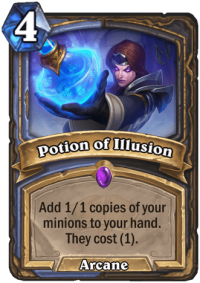 As Turtle Mage, you are slowly chipping your opponent to death. Sure, you have a sweet combo with Tortollan Pilgrim and Potion of Illusion that allows you to chain one-cost Tortollan Pilgrims time and again, but you can also win without it. All that you really need is some minions on the board and some freezes to prevent the opponent from responding, and then you chip away their health from there.

Much of the time, however, you cannot afford to essentially do nothing on turn eight, so you need to work on your survival on that turn and then go off with the combo either on turn nine of turn ten, depending on whether you have drawn one Tortollan or both of them. With one Tortollan Pilgrim and ten mana, you can make a copy, then make two copies, and then freeze the board while still retaining a single one-cost copy in hand. 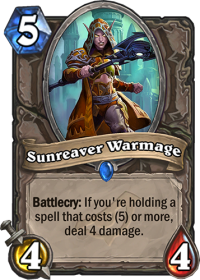 You can do a lot more than just bounce some Tortollans around on your combo turns. The most direct threat you have is Sunreaver Warmage, which only works if you’re holding a Blizzard or a random expensive spell. You can make multiple one-cost copies of the Warmage and shoot things, including face. You can also make copies of Jandice Barov for more threats, Khartut Defender for defense and healing, and Wand Thief or Wandmaker for additional resources. You need to watch your hand size and board because it is easy to run out of space on both once you have the combo in place: trade away minions that you do not want and make sure that you have enough space in your hand and on your board for your Tortollan Pilgrims.

The choice of freeze spell depends on the situation: if you want to keep your opponent’s minions where they are, use Frost Nova. Many decks cannot do anything if they have no board space, and in such cases, you do not want to create any for them. If you want to get through or clear the board, use Blizzard. Sometimes, it is less risky to just destroy the board instead of freezing it.

Your worst nightmare is drawing both copies of Potion of Illusion. Sometimes you can still make it work, especially if you manage to hold on to some kind of a board, and can make copies of good Battlecry minions, even if you can only do it twice in the entire game. Luckily, you have multiple tools to control your draws: Sphere of Sapience is a powerful tool that can send unwanted cards to the bottom of your deck, especially your spells, and the real star of the deck is Lorekeeper Polkelt. 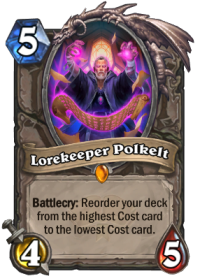 Lorekeeper Polkelt can rearrange your deck so that the most expensive cards are on top. Polkelt is an excellent tool for drawing Tortollan Pilgrim exactly when you want it: you can grab it for turn eight if things are calm and you have time, or you can take it for turn nine and ten if things are a bit more hectic. If you can equip Sphere of Sapience before Polkelt, you can send the eventual spells to the bottom for a lot of Tortollan Pilgrim goodness. However, often you do not find both cards, in which case it is completely fine to play Lorekeeper Polkelt without Sphere of Sapience. You know how many draws you have until you get to your four-mana cards and the Potion of Illusions, so you can plan ahead and have enough turns with Tortollan Pilgrims to win the game. Even after you’ve hit both Potion of Illusions, there is still some more time until you’re out of Frost Novas, and your supply of one-cost Pilgrims should easily last long enough to use them.

Note that any effect that shuffles the deck after Lorekeeper Polkelt can mess up your plans. Bomb Warrior is the worst in this regard because their bombs reshuffle the deck every time a new one is sent in. You can also shuffle your own deck by having Astromancer Solarian die after you use Polkelt. You usually do not want that to happen. 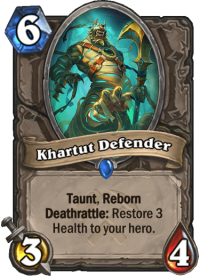 Against aggressive decks, your main goal is to survive. If you can withstand their initial onslaught and get to your Tortollan Pilgrims, you should be able to get out of reach with endless freezes and Khartut Defenders or Earthen Ring Farseers. If the opponent uses weapons or other Hero attacks, Frozen Shadoweaver can keep the Hero locked as well.

Use your resources liberally in the early game. Violet Spellwing and Wandmaker can give you crucial cheap spells to activate Firebrand, and dropping an Imprisoned Observer on the board can help against Stealth minions. Jandice Barov on curve can help you contest the board, and sometimes ends up just winning the game. Any freeze effects that you draw can be used to delay the opponent and potentially push in damage even without ever seeing a Tortollan Pilgrim.

Against slower decks, you can pay more attention to finding your combo pieces to chew them up with repeated freezes or with Sunreaver Warmage. In these matchups, hand space and board space are your most important assets: you want to clear your hand of unessential cards so that you can make several copies of game-winning cards with Potion of Illusion when you reach your combo turns. If those cards end up generating enough tempo to win the game, that’s fine too.

You still play your early-game cards much in the same way as against aggro decks, but your mulligan is different as you focus on the combo pieces instead of survival tools. 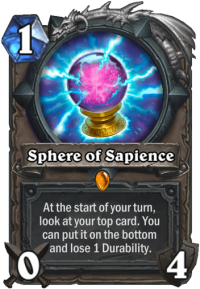 The expensive cards in Turtle Mage come in three forms: the vital combo pieces, almost as vital support, and less mandatory support pieces. All of the expensive cards support the combo in some way, but some of them can nonetheless be replaced.

There are no direct replacements for any of the expensive cards. The ones that can be replaced are simply substituted with other good cards for the archetype that do not necessarily perform the exact same role in the deck. You can add second copies of some of the cards that are otherwise run as singletons, or you can add other useful Battlecry effects that can help you survive and improve your combo turns.