Our Secret Rogue deck list guide for the Scholomance Academy expansion features one of the top lists for this archetype. This Rogue guide includes Mulligan Strategy, Gameplay Tips, Card Substitutions, and Combos/Synergies!

Secret Rogue is the latest iteration of the long-running Rogue archetype which aims to cheat out a ludicrous amount of stats in a single turn with Questing Adventurer or Edwin VanCleef, using zero-cost cards and cost reduction tools to set up these incredible tempo swings. This, coupled with the flexible resource generation options made available to the class, makes Secret Rogue a versatile contender in the current meta, albeit one which can be fairly challenging to pilot effectively.

We’ve featured the list from the latest Vicious Syndicate Meta Report because of our successes with it in high level play. Note that the standard ladder build differs from it in quite a few flex spots, of which you can find more information in the Card Replacements section below!

Find more versions of this deck type on our Secret Rogue archetype page! 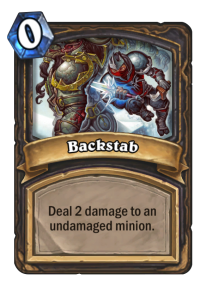 The nontraditional nature of this Rogue build should immediately come to the forefront once you consider how it plays against aggressive opponents. Normally, the removal of small early-game threats would be straightforward enough for the class, but only Backstab made the cut of the usual triumvirate, with Sap and SI:7 Agent both stuck on the sidelines (with Blackjack Stunner serving as a replacement of sorts for the former role). It goes without saying that a big boy Edwin VanCleef or a juiced-up Questing Adventurer will get you past the finish line more often than not even against all-out aggression, but the challenge comes from stalling long enough until you can flip the board on your opponent.

EVIL Miscreant is a key part of this puzzle: not only is the 1/4 statline supremely annoying to deal with, all but one of the Lackeys are extremely efficient tempo plays. Shadowjeweler Hanar can also go a long way in these matchups, essentially buying you enough time until you can piece together a clear while simultaneously developing a Questing or Edwin. Check out this sample game, which though features a few suspect plays on the opponent’s part and a greedy mulligan, should serve as a good example of how to stall out a Face Hunter opponent long enough to find a way back from the wilderness. 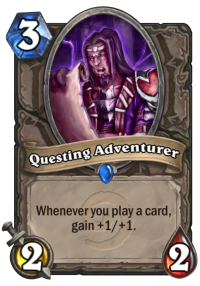 Your dream scenario is to deliver an early knockout blow with by going tall, a massive Questing Adventurer or an Edwin VanCleef set up before the massive board clears come online. It’s the kill(-it)-or-be-killed moment for your opponent and if they can’t match the threat, make sure you actually leverage it by dealing face damage instead of making the pointless value trade. You don’t need many attacks from a turn 4 8/8 to win the game.

This, however, doesn’t always come to pass, and if you don’t have the right hand to create a massive minion early on, you’ll have to figure out how to space out your threats in a way to avoid running out of resources while still maintaining enough pressure to close out the game. You can’t play a large Edwin or Questing without having a bunch of other cards in your hand, and juggling your resource reserves and your board presence is what makes playing this deck a difficult challenge. Similarly to Tempo Mage, you can easily go the distance with Secret Rogue if you play it right: EVIL Miscreant, Wand Thief, Shadowjeweler Hanar and Pharaoh Cat coupled with Shadowsteps will get you enough juice for a few extra turns. Don’t forget that you can use Blackjack Stunner as a poor man’s Shadowstep on your own minions as well if needed! Plagiarize is best used when you already have a tempo lead and you want to deny (or at least match) your opponent’s comeback turn.

Keep an eye on the clock: your chances of winning will dwindle past turn ten, but it’s not impossible to get there. This means your priority should be to fight for an early tempo advantage and try to close out the game leveraging that, but once that fails, you need to veer sharply in the resource generation direction while you regroup and set up a collection of new threats. You don’t have consecutive strong waves of threats: once the first is repelled, you need to be very careful and deliberate setting up the next attack. Take a look at this victory against a Turtle Mage player which went to distance and note how long it took to develop the first meaningful threat on the board. 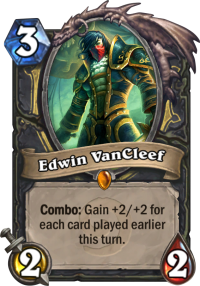 With the typical tempo-based Rogue game plan inevitably revolving around Questing Adventurer, Edwin VanCleef and zero-mana stuff, you don’t have that many slots to play around with in a build like this. However, those that are available can be quite impactful, and our own ladder experience has matched up with the Vicious Syndicate team’s suggestions when it comes to changing the currently popular ladder build. It turns out neither Dragon's Hoard nor Vendetta are necessary to make this archetype work in this meta, and they are in fact a downgrade to the alternatives. Nevertheless, they are indeed available to you in a pinch if you need to toss in some other cards compared to the featured build – but you should definitely prioritize the tempo tools we’ve listed above.

The problem with Dragon's Hoard is that it’s a one mana do nothing spell on the turn you cast it and its payoff usually comes into play in scenarios when you’re heavily losing anyway. It doesn’t help you execute a tempo-oriented game plan as effectively as the proposed replacements can. Similarly, Vendetta’s free removal requires more setup than you’d think and in many cases it isn’t even necessary as you will either be ahead on the board already or with enough resource generation options available to make up for its effect.

By contrast, Intrepid Initiate offers vital early-game tempo against decks like Druid or Warrior, plus added consistency for your EVIL Miscreant activations. It also makes a turn two Secret play a much more tolerable proposition for you. Similarly, Jandice Barov simply offers way too many stats to cut from a deck like this. As for the distribution of Secrets, five seems to be the sweet spot. Though Plagiarize is also a useful tool, it is the most situational out of the three, leaving you with 2x Ambush and 2x Dirty Tricks to trigger Secret synergies and to round out your curve in suboptimal mulligans. Cult Neophyte is also a viable option but always keep in mind that you preferred method of disrupting late game spell plays is to kill your opponents before they can make it that far.