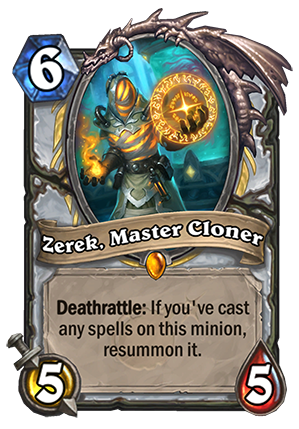 Deathrattle: If you've cast any spells on this minion, resummon it.

His original name was Aerek. Then the first clone was Berek. They went evil around Merek.
Tweet

Interesting mechanic, but I think that it might be on the weaker side. On the one hand, the potential is massive. Being able to revive it over and over again is incredibly powerful, basically better than any other Deathrattle card. But there’s a catch – it’s very hard to make it work.

First of all, it’s useless by itself. 6 mana 5/5 with no effect whatsoever. Only after you cast a spell on it, it “activates” itself. So it’s not really a 6 mana play, but at least a 7 mana play. Another issue is that Priest doesn’t have enough cheap buffs to cast on him. Power Word: Shield is one, but what after that? Divine Spirit is not really an option, because you don’t run this in Combo Priest. Binding Heal is okay, but only after it’s already on the board and takes some damage. Unidentified Elixir is the only other flexible buff that you can run, and it’s not the best card ever, plus the combo is 9 mana. Maybe Vivid Nightmare too, especially if you run deck with lots of Deathrattles. Maybe if you combine Vivid Nightmare AND Binding Heal, it can be nice. For 10 mana you end up with two 5/5 bodies that both come back on Deathrattle. Not the best play ever, but pretty good.

It’s weak to Silence, but that’s not a big issue in a Deathrattle Priest – most of the cards you play are weak to Silence, and this one doesn’t get completely countered like Lynessa Sunsorrow. The problem is that right now it’s pretty hard to activate. You don’t really want to keep your Shields just for this guy, and there aren’t other great cards you can use to activate it. And ideally, you want to activate him more than once to make him worth it – otherwise you’d just run Cairne Bloodhoof and don’t bother with casting extra spells on it.

Realistically, in order for this to be playable, you really need another cheap way to buff it. If a good 1-2 mana buff spell gets printed, then this card has some solid potential. If not, I don’t see it working right now.

Card rating: 4/10 right now, or 7/10 if another good, cheap buff spell gets revealed