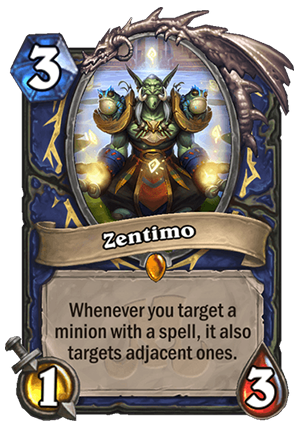 Whenever you target a minion with a spell, it also targets adjacent ones.

This card is actually pretty close to Electra Stormsurge – they’re both powerful 3 mana Legendaries that combo with specific spells. While Electra worked best with spells that don’t target anything (such as AoEs, Healing Rain etc.), this is basically the opposite – it’s amazing with nearly any single target spell Shaman has. Unlike Electra, its effect can also trigger multiple times – to compensate for that, it has significantly weaker stats (1/3 instead of 3/3). And funnily enough, those two can synergize with each other to a certain extent. You can play Zentimo, drop Electra and then double a single target spell, each of which will hit 3 minions. It seems especially potent with something like Earthen Might.

Even looking at the current pool of Shaman spells, the card is just good in Midrange/Tempo/Control Shaman archetypes. This + Lightning Bolt is a semi-AoE spell (3 damage to 3 minions). With Hex, it clears 3 minions no matter how big they are. With Unstable Evolution it can transform 3 minions at once – just this + 4-5 casts of Unstable Evolution and you’re having a wide board of massive minions from just a bunch of totems. Earthen Might becomes an AoE buff, and can draw a bunch of cards if the minions you have are Elementals. I could even see a nice burst combo. Let’s say that you stick 3 minions to the board that can readily attack (it’s not THAT difficult in Shaman). Let’s say that those minions have 4 attack in total. You play Zentimo + Windfury + 2x Rockbiter Weapon and your 4 damage turns into 26 damage out of nowhere. The last combo seems a bit too clunky, but maybe a variant of it might work.

Zentimo is just good, just like Electra is. Any Shaman deck with at least a few good single target spells will at least consider running it, and a bunch of them will probably do just that. Any strong single target spells released over the next few expansions will also boost its strength. I would be really surprised if it didn’t see at least some play.

P.S. It was confirmed that the card indeed DOES triple Overload too, so using it with something like Lava Burst becomes less appealing (as 6 overload damage next turn is quite a lot), but it doesn’t automatically become bad with any sort of Overload.