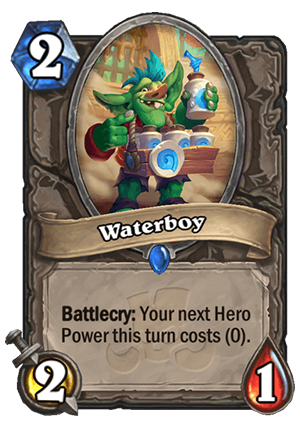 Battlecry: Your next Hero Power this turn costs (0).

Hero Powers cost 2 mana. This card costs 2 mana and makes your Hero Power free. Which basically means that it’s a 0 mana 2/1 on the turn you would want to use your Hero Power. If it was an unconditional 0 mana 2/1, I would call it really powerful (Aggro decks would seriously consider running it), but as it is right now, it’s not as good.

The card works a bit like Kobold Librarian – it’s basically a Warlock’s Hero Power slapped on a 2/1. But not only that 2/1 costs 1 mana instead of 2, but you can use BOTH it and your Hero Power – in this case you can’t. So even Warlock, which has arguably the strongest and most commonly used basic Hero Power, probably wouldn’t want to run it – Kobold Librarian is just in a completely different league. It only works for your NEXT Hero Power, so Shadowreaper Anduin shenanigans aren’t an option either.

I think that this card has too low of an impact to see play. In the late game, you DEFINITELY don’t want to trade a card for a free 2/1 minion that will just die to some random trade, AoE, Hero Power etc. And in the early game, you don’t really want to be using your Hero Power – you’d rather play some good standalone 2-drops most of the time. It’s comparable to a standalone 2-drop on Turn 2 (a lot of the 2-drop are even better), and later in the game you’d rather have something else than a free Hero Power, especially if you don’t starve for mana anymore.

It would be another story if Hero Cards had more expensive Hero Powers – e.g. something like 4-6 mana Hero Power. Then you could absolutely justify playing it for a small early game tempo boost, as well as the late game synergy with those. But it’s not the case.