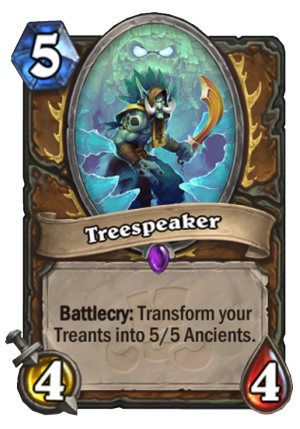 Battlecry: Transform your Treants into 5/5 Ancients.

I feel like Treant variant of Token Druid was close to being viable in the last expansion, and it might get even closer or actually become a thing. You see, we had a few ways to summon Treants and some ways to benefit from them in the long run (like reducing the cost of Mulchmuncher), but there was no immediate pay-off. This is it.

Even though the transformed cards can’t attack right away, turning 2/2’s which die to nearly every single AoE and don’t trade favorably into many minions into 5/5’s is a huge, and I mean HUGE improvement of the board. 5/5’s dodge a lot of AoEs, trade really well into Spreading Plague, and most importantly, put A LOT of pressure. Having three 2/2’s is 6 damage per turn – sure, it might be a bit scary for the opponent if you buff them, but you won’t suddenly threaten lethal (one Savage Roar = 14 damage in total). However, three 5/5’s are way bigger – they threaten 15 damage by themselves, and up to 23 with just a single Savage Roar.

It’s a bit like Quartermaster did push Dude Paladin into a viable territory, this might do the same thing for Treants. On the one hand, the fact that 3/3’s could attack right away was quite important. On the other hand, +3/+3 buff is significantly better than +2/+2, and I’d argue that 4/4 stats are better than 2/5.

And the thing is that none of the Treant Druid cards will rotate out in 2019, so if we get more synergies, it might turn into a viable, high tier deck even if it won’t now. Overall, I like the card.