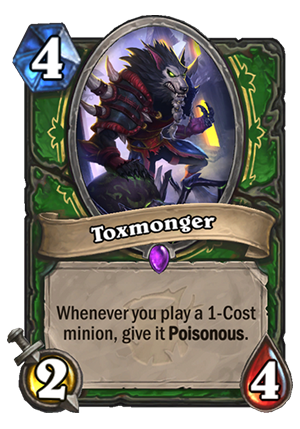 Toxmonger is a 4 Mana Cost Epic Hunter Minion card from the The Witchwood set!

Whenever you play a minion that costs (1), give it Poisonous.

Not all spiders are born poisonous. That's where he comes in.
Tweet

This one is very interesting and INCREDIBLY hard to rate. On the one hand, if you can get the synergies going, it’s absolutely insane. On the other, it can be a completely dead card at times.

Giving every 1-drop you play Poisonous is a very strong effect, especially on cards with Divine Shield, Rush/Charge and other ways to deal damage. The best combo here is Elven Archer – it was confirmed that its Battlecry will work with this card. So, for 5 mana, you remove ANYTHING, then put a 2/4 and 1/1 with Poisonous on the board. That sounds a bit like Vilespine Slayer, but it’s even better, because the 2/4 has to be immediately dealt with, or you can remove something else next turn. Not only that – the 1/1 with Poisonous also has to be pinged / removed by some cheap spell or else it will just hit a bigger target and clear it immediately.

It also works very well with Stonetusk Boar, which becomes a 1 mana removal, although nothing stays behind on the board. Argent Squire is also solid – even though it has no immediate impact, a 1/1 with Poisonous and Divine Shield has quite a bit of value, especially when there is an even higher priority target to clear on the board. Fire Fly can work too, but you’d have to move the combo back by one turn, to give Poisonous to both 1/2’s.

As you can see, the combo is insane. However, the problem is, that those cards don’t work individually. I mean, Elven Archer is not a good 1-drop, it’s not a card you’d normally want to put into your deck. And this too – 4 mana 2/4 is unplayable if you don’t combo it right away. So you put a few cards that are very weak individually and work only if you combo them with each other. It also incentivizes you to hold onto your 1-drops in the early game, which often will be a bad decision – fighting for the early game board control is very important, since Hunter doesn’t have lots of comeback mechanics.

And what deck would you want to slot it into? Control doesn’t really want to play a bunch of 1-drops, while a faster deck definitely doesn’t want to play BAD 1-drops that work only when you combo it with another card that is bad by itself.

I feel like the only deck that might want to play this is Quest Hunter, which is full of 1-drops, including the 1 mana 3/2’s you get from finishing the Quest. Giving them Poisonous could be pretty powerful, and might be a way for the deck to assume the board dominance in the mid game, where they usually struggle a lot. It has nice synergy with Tol'vir Warden too, and Quest Hunter probably wants to play that one.

Outside of Quest Hunter? Looks like a fun card in theory, but I don’t believe it will work. It’s just too unreliable. You combo it with the best 1-drops like Archer, then it’s great. But in 70-80% of the matchups you’d either draw the 1-drops first and have to play sub-optimally or draw this without getting the right 1-drops and this will be a dead card. And I still don’t believe that Quest Hunter will be a thing, but maybe they want to add more support to the deck in the upcoming expansions.