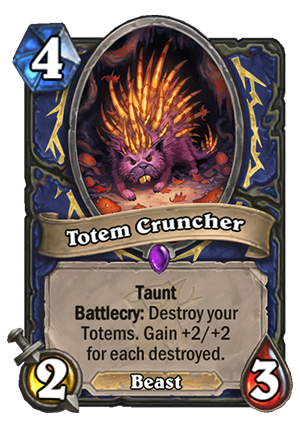 Totem Cruncher is a 4 Mana Cost Epic Shaman Minion Beast card from the The Witchwood set!

Taunt Battlecry: Destroy your totems. Gain +2/+2 for each destroyed.

You definitely don’t want to play it in any regular Shaman deck. Yes, your Hero Power totems are often useless. But you still have to pay for them, it’s not like they come for free. Making this card big is a huge mana investment. For it to just break even (4/5 Taunt for 4 is playable), you need to pay 2 more mana on an extra Totem, which puts this card’s total mana cost from 4 to 6 etc. It ramps up, but even if you destroy let’s say 3 Totems (which is super rare, as your opponent will usually actively destroy them for you), you’ve paid 10 mana in total for a single 10/11 Taunt, which can easily get Silenced back to 2/3 or just destroyed with a single target removal.

However, where this card might make sense is a Genn Greymane deck. With no Odd cost cards, you’d often play an even card + Hero Power on those Odd turns. And if you will play a deck without Totem synergies, you wouldn’t mind destroying them that much. For example, you could Totem on Turn 1, then Murkspark Eel on Turn 2, then some other 2-drop + Totem on Turn 3, and then eat those two totems on Turn 4 and have a 6/7 Taunt in play. This scenario looks really good.

The thing I dislike about this card are the initial stats. 2/3 for 4 is very low, it’s unplayable by itself and very weak to Silence. Good thing is that it ramps up pretty quickly, and since you will play Totems very often starting from the mid game, it should be quite easy to make it work. In the worst case scenario, it will be a 5 mana 4/5 Taunt, which is meh, but even with one extra totem, it’s going to be a 6/7 Taunt and so on.

On the other hand, if you play a deck that plays Hero Power Totems so often, wouldn’t you like to put more Totem synergy in? And if you do, wouldn’t it be better to not eat them? Yeah, that’s the thing too. So in the end it’s pretty much impossible to tell which way to build deck would be optimal, and if any of them will actually work.

Overall, it’s an interesting card. Definitely unplayable in regular decks, but might have some potential in Even decks.