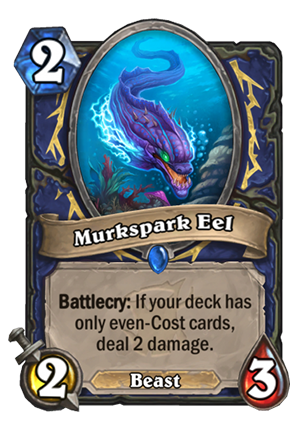 Murkspark Eel is a 2 Mana Cost Rare Shaman Minion Beast card from the The Witchwood set!

Battlecry: If your deck has only even-Cost cards, deal 2 damage.

Let’s start with the card itself. 2 mana 2/3 are solid stats. 2 damage on Battlecry, however, is AMAZING. Of course, 3 damage would be better – we all know how powerful Medivh's Valet is when Mage has a Secret up. But unlike Medivh’s Valet, this could also be played on the curve with the extra effect. 2 damage is often enough to clear a 1-drop or even some 2-drops, later in the game it could help with the board control too or provide some small burn damage. Great card.

Okay, but here’s the thing. Even though I think that Shaman’s Hero Power is one of the best ones to have for 1 mana (you can play it on Turn 1, it’s synergistic), I don’t think the deck would work in Standard right now. The problem is the lack of synergies. For example, Hero Power had great synergy with Thing from Below. You could bring it down to 0 mana very quickly. But it’s rotating out. We had another card that would fit really well into such a deck – Thunder Bluff Valiant. But not only it’s odd-cost, but it’s also Wild only.

So in the end, I feel like in order to make this deck work, we’d need more Totem synergies. Not necessarily direct synergies – for example, Flametongue Totem, even though it doesn’t directly synergize with the Totems, would be amazing in such a deck. Since you would put a totem up almost every turn, it would be much easier to get Flametongue value.

But, it obviously wouldn’t be without sacrifices. Lightning Storm and Volcano would be gone, it means that you would be left with no AoE at all, unless they print some even-cost one. Mana Tide Totem, Hot Spring Guardian and Healing Rain would also be gone, and Jinyu Waterspeaker, which would be the best healing replacement, is gone from Standard.

However, as you can see, the amount of high quality cards you need to sacrifice is not as high as in the previous two builds (Odd Mage and Odd Druid). Depending on the cards that we will see in this expansion, or upcoming expansions, it might actually work. But with the current knowledge, I can’t rate it higher than average.

But as a general point, Shaman REALLY needs some powerful cards to not be completely irrelevant. The two last expansions were nearly non-existent for Shaman and in the current meta it’s still getting carried by its 2016 and Un’Goro cards. However, with all the 2016 cards rotating out (including the whole Jade mechanic), things don’t look too well for the class. If the class base doesn’t look good, the Odd/Even synergies look even worse. The thing is, if the class hasn’t got enough good cards to fill the normal deck, it will surely not have enough good cards to fill even/odd-cost deck.

Card rating: 5/10, higher if they print some strong even mana cost cards – especially board clears and totem synergies.