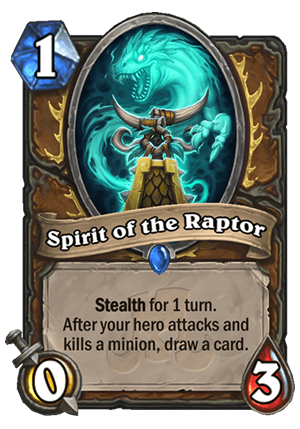 Spirit of the Raptor is a 1 Mana Cost Rare Druid Minion card from the Rastakhan's Rumble set!

Stealth for 1 turn. After your hero attacks and kills a minion, draw a card.

Spirit of the Raptor Card Review

Killing minions with Hero seems to be “the thing” for Druid this expansion, but this theme just doesn’t feel strong at all. Druid has no weapons (besides Twig of the World Tree, which has 1 point of Attack and is usually used for different strategies), any kind of attack the class gets is temporary. At the base level, he can only gain 1 Attack with Hero Power, but that’s often not enough to finish anything off, and really slow. He CAN gain more attack, but usually through sub-optimal cards such as Claw, Gnash or Bite that he doesn’t want to put into the deck. The only realistic way to trigger those effects consistently is Malfurion the Pestilent, but basing a strategy like that on a single card that you might not even draw doesn’t seem great.

But let’s even assume that you can finish a minion off with your Hero Power one turn. Playing this + doing it is basically cycling for 3 mana, and then assuming it doesn’t die, and you have more targets, you need to use some more mana on your consecutive turns to draw. You rarely finish minions off with your Hero turn after turn, but just using it to draw one is very bad. I mean, this card is like a conditional and significantly worse Mana Tide Totem. You’re limited to 1 per turn anyway, since you can’t attack with your Hero more than once (I’m talking about realistic scenarios, not the one where you somehow get Doomhammer).

The whole theme seems pretty bad to me, and this card in particular is very weak. You will rarely draw more than 1 or maybe 2 cards, and it will cost you quite a lot. If you’re going for the Hero Power strategy, then yeah, it’s a good option, but I don’t see this kind of strategy working, to be honest. Druid has better ways to draw cards.

The only deck I could see this played in is Odd Druid, which has limited access to card draw (no Branching Paths, no Ultimate Infestation) and a better Hero Power. Would it be good enough? Hard to say, but has some potential.