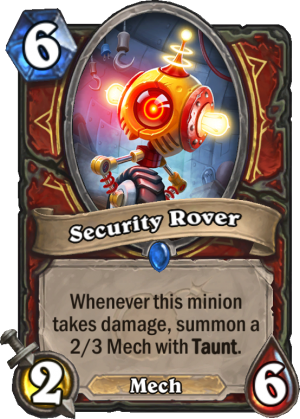 Whenever this minion takes damage, summon a 2/3 Mech with Taunt.

This card seems really, really bad. While it has some Grim Patron vibes, it’s nothing like that. Patron was strong, because its copies could also copy itself. This is more like Hogger, Doom of Elwynn, just without a powerful initial body.

Let’s start with stating obvious. 6 mana 2/5 is absolutely terrible. By that time, your opponent will definitely have a way to either kill it in one blow (and minimize the value) or just remove it with a spell etc. Triggering once is obviously terrible – 2/5 + 2/3 Taunt for 6 mana sucks. Even triggering it two times, which is realistically a very good scenario, it’s still bad. You need to trigger it 3 times or more to make it work, and that’s very hard. Either you need to buff it and your opponent needs to have absolutely no removal/Silence, or you need to play some Whirlwind effects and such, but that’s mostly a waste for a card like that.

If this card has Rush or Taunt, just something extra, it would be a better, but probably still not good enough. To really make it work, you need to not only have Dr. Boom, Mad Genius already played (so it has Rush), but also have some relatively cheap Magnetic minion to stick it to this guy and potentially get more value. You might see it being played sometimes, from the random Discover effects and stuff, but I seriously doubt that it will be good enough to play in the deck.