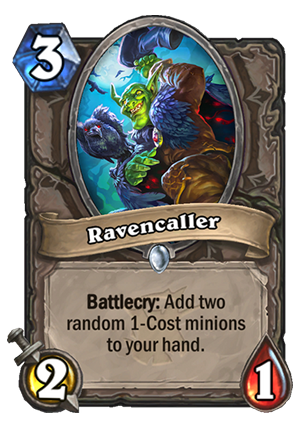 Ravencaller is a 3 Mana Cost Common Neutral Minion card from the The Witchwood set!

That Friends and Familiars Plan is really paying off!
Tweet

I just can’t see a deck that would want to play it. If you play Control, you definitely don’t need a 2/1 3-drop that gives you two 1-drops. If you play Aggro or Midrange, you’d rather play something powerful on curve, because this card is super low tempo. Those are 1-drop stats, which is far from optimal.

Then, the fact that it gives RANDOM 1-drops means that you can’t even put it into a specific deck. If it gave you two Beasts, you might consider using it in a Hunter. If it gave you two Murlocs, maybe in a Murloc deck. But random 1-drops aren’t exactly most thrilling. There are lots of bad / useless ones.

Outside of this being a Battlecry, I just don’t see it being better than Igneous Elemental. 2/3 is already slow, but it is so much better than 2/1. Getting two 1/2 Elementals is also more consistent – you know what the outcome will be and you can put it into the right deck. For example, I’ve heard some people saying that this might combo well with Hagatha the Witch. And yes, you’re right, but why would you run it over Igneous Elemental, which also combos with Hagatha, is better, and has Elemental synergies too?

Quest Hunter maybe? But not only is that deck bad, but playing a 3 mana 2/1 might mean that you fall behind on the board even more in the early game, which is bad. One of the reasons Quest Hunter doesn’t work is that while 1-drops are great on Turn 1 and Turn 2, when you’re forced to play only them on Turn 4 or Turn 5, you start falling behind.

Possibly it might make sense in the upcoming “HandDruid” they seem to be pushing, but I’m not sold on the whole concept yet. We’ll see. For one, it at least looks better than Witchwood Apple.

All in all, this card looks bad. It doesn’t make sense in “generic” Aggro/Midrange/Control decks, maybe some specific build would want to play it, but then the random aspect of the card means that it will be slightly unpredictable. Those specific builds might try to experiment with it, but I can’t really see it sticking in the meta anyway.