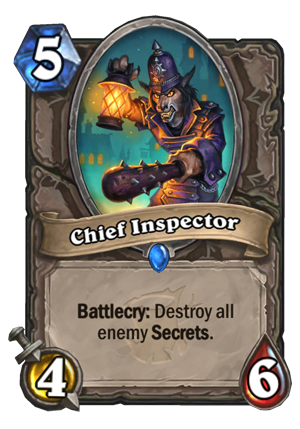 Chief Inspector is a 5 Mana Cost Rare Neutral Minion card from the The Witchwood set!

Empty your pockets, I know you’ve got a Wandering Monster in there!
Tweet

I like the fact that they constantly keep some kind of anti-Secret tech in Standard. First it was Kezan Mystic, then Eater of Secrets and now this. I honestly think that this card is better than Eater of Secrets. Even though Eater was already a 4/6 (for 4, not 5!) just after destroying two Secrets, in most of the matchups it was simply a 4 mana 2/4. 5 mana 4/6 base stats are better, since the card is playable (yes, it’s bad, but also playable) in the matchups which don’t play Secrets.

It’s clearly a tech choice. If you face Secret decks, you can consider putting it. It’s a bit similar to the Skulking Geist in a way – 4/6 mid game body that is vanilla in most of the matchups, but can work wonders in certain 2 or 3 matchups you face on the ladder. I’m quite sure that if the meta will demand it, it will see play. But will it? Ice Block is rotating out, and it was the most common Secret you’ve ever teched against. Right now I don’t think it will be played, but maybe in the future expansions. It’s always good to have some kind of way to counter Secrets available in the game in case a deck like that takes off and becomes high tier.

Oh, and it’s also a good Arena card. Eater of Secrets was bad, because it was nearly unplayable if it didn’t hit anything. This can be dropped on the curve without really losing you the game, and it can potentially get extra value in some matchups.

But to be fair, I think that they should just add one of those cards to the Classic set and be done with it instead of reprinting similar cards over and over again.