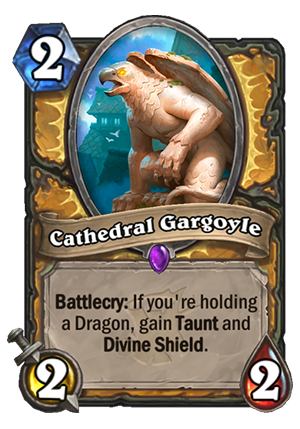 Cathedral Gargoyle is a 2 Mana Cost Epic Paladin Minion card from the The Witchwood set!

Battlecry: If you're holding a Dragon, gain Taunt and Divine Shield.

Shielded Minibot? With an upside? What? Oh, the Dragon synergy is required. That’s good.

But wait, is it good? While it’s still theorycrafting, the synergy might actually be activated quite easily.

First option is obviously a full Dragon Paladin deck. Something that was attempted in the past before. There were even some Paladin Dragon synergies – Dragon Consort and Nightbane Templar, although the second one wasn’t really great. Right now, this will be the only Paladin Dragon synergy in Standard, but that might be enough, as its honestly the best one out of three.

But is it worth it to build a Midrange Dragon Paladin? To be fair, I don’t think so. Netherspite Historian rotates out, as well as some strong Dragons like Book Wyrm. And Midrange Paladin is kind of a thing of the past – aggressive builds are just better now with the cards the class has.

But maybe some Aggro Paladin, with just some Dragons here and there? Maybe? That might actually work. The new card – Nightmare Amalgam – should be great for this kind of deck. Then, Cobalt Scalebane is a thing, and even though it hasn’t seen much play recently, it’s not a bad card by any means. Faerie Dragon could also be used in a 2-drop slot, it’s a solid activator and also a good thing to pull from Call to Arms.

One of the issues with this card is that Gargoyle itself is not great to pull from CtA. Vanilla 2/2 would probably be your worst option, but to be fair, it’s still not bad. Even if CtA gave you 3x 2/2, it would still be a great card.

This card is obviously busted if the right deck for it will be found. I feel like we’re one strong Dragon / Dragon synergy card away from building a deck around it. With the cards we have, it might just not be consistent enough in an Aggro deck with 4-6 Dragons added in (remember that you want to activate it on curve as often as you can), and I can’t really see a slower Dragon Paladin build being too viable.

I have to rate it highly, because I feel that someone will definitely make it work. And when it works, it’s one of the most busted cards in the game. I will give it a 8/10 and not a full 10/10 because activating Dragon synergy on Turn 2 might not be as consistent as some people think, and because it doesn’t synergize that well with CtA. But other than that, it’s flawless.