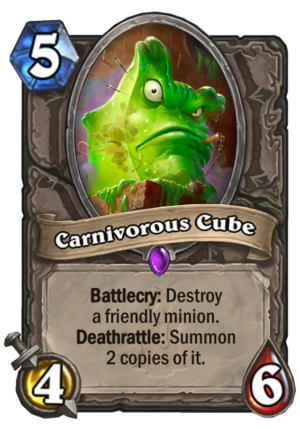 Carnivorous Cube is a 5 Mana Cost Epic Neutral Minion card from the Kobolds and Catacombs set!

Battlecry: Destroy a friendly minion. Deathrattle: Summon 2 copies of it.

He's always grumpy until he's eaten his first barista of the morning.
Tweet

Now there’s an interesting card! And quite powerful, too. It’s costed at the magical 5 mana, which means you can often play it alongside other cards in the same turn and it comes with a decent body. It’s not great, but it’s alright. Obviously, the real power comes from the card’s text box. First off, to get the obvious out of the way, it has amazing synergy with Deathrattle cards. It interacts with them two times – once serving as an on-demand trigger and the second time, when it dies, it doubles the value of your Deathrattle minion, getting up to three potential deathrattle triggers! Needless to say how powerful that can be, especially as more good deathrattles enter Standard… or in Wild, with cards like Sylvanas Windrunner or Sneed's Old Shredder. While on the topic of Deathrattles, it’s worth mentioning the interactions with N'Zoth, The Corruptor – it will summon all copies of Carnivorous Cube‘s meal that have managed to die, however it will also summon the Cube itself and while its Deathrattle won’t be active this time around, it is a very solid minion to get for free, especially in Standard where N’Zoth makes board states more centered on value rather than stats.

Aside from Deathrattle cards, the Cube has other interesting applications. It’s an extremely slow card, do not fool yourselves, however it provides amazing value just about anyway you use it. First of all, it’s a form of card advantage, essentially duplicating a minion you have on the board. It works similarly with End-of-Turn (EoT) effects and static auras in almost the same way it works with Deathrattles, so there are those cards to look out for. In addition to that, it can be used as a way to make messy board states for those minion-centric battles that the zoo-style and arena decks tend to find themselves in – value trading a minion and having it eaten by the Cube can be pretty good, especially when Carnivorous Cube itself can’t be left unkilled because at 4/6 it is a threatening card.

All of that being said, it is a bit of a double-edged sword of a card. The amazing potential it holds comes at the price of being extremely slow and keeping the card minion it ate inside itself. Firstly, if the meta isn’t the holy control meta you can hear reddit talk about all the time (and let’s face it, that never happens, and for good reason), most often when you play Cube you will die very shortly after, unless you are hitting one of its prime targets. Second, if the meta is at a place where Carnivorous Cube is at its best, that means the meta is slow. And in a slow meta, the hard removal you barely see these days will come back – the Saps, Hexes, Polymorphs and Entombs (Wild) of the world are lying in wait. Most of the time if your Cube gets Polymorphed you will lose the game.