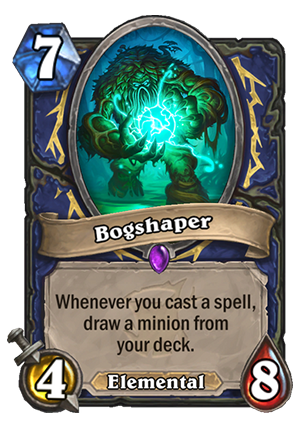 Bogshaper is a 7 Mana Cost Epic Shaman Minion Elemental card from the The Witchwood set!

Whenever you cast a spell, draw a minion from your deck.

The tricky part is getting them to HOLD their shape.
Tweet

I feel like this one is too slow. If you play a slower Shaman deck with Hagatha the Witch you probably already have lots of late game value. Do you really need to play more? Also, we need to look at the average case scenario, not the best case scenario.

This is unplayable on the curve. Well, not completely unplayable, but a 7 mana 4/8 does nothing against Aggro and will be removed by Control before you get the value.

The effect? Well, if you want to draw cards when playing spell, you can already do that – Gadgetzan Auctioneer is a thing, you know. Yes, it has 4 less health and no Elemental tag, that’s a big deal, but one mana cheaper means that it’s easier to cycle with it + you can draw spells too, so you could potentially draw a spell into another spell.

Yes, thanks to the extra health and Elemental tag, I’d say that it’s a little better than Auctioneer, but I wouldn’t say that it’s MUCH better. Also, how many cheap spells will you put into your deck in the first place to take advantage of this card? You don’t have Preparation like Rogue, and you don’t want to play spells like Lightning Bolt or Totemic Might.

Well, you MIGHT have a bunch of cheap spells from Hagatha lying around, but it means that you’ve already played Hagatha and some minions, so it’s way past Turn 10. Which makes it even slower.

Another thing is that this kind of effect is most likely to work in slow matchups, but at the same time, drawing a bunch of cards in the late game might not always be good in the slow matchups. That deck looks like something aspiring to win some fatigue games, and you can’t win fatigue games if you draw too much. But that’s a more minor issue, as only a small fraction of the games actually end up in fatigue.

All in all, I could maybe see this as an one-of in a slower meta to get some more refill in the late game. In a faster meta, it definitely gets out of your deck immediately. Looks like a pretty average card.