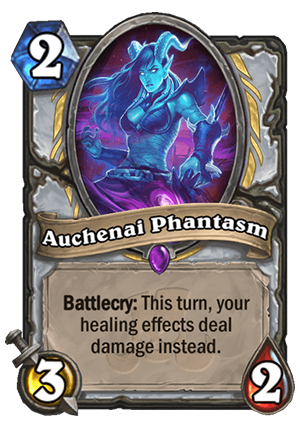 Battlecry: This turn, your healing effects deal damage instead.

“Okay kids did everyone remember to heal before we left?”
Tweet

Do you guys remember Embrace the Shadow, which rotated out at the beginning of this year? Actually, it has seen some play as a combo with Circle of Healing. The fact that it was 2 mana cheaper made a big difference, and Auchenai Soulpriest was left as a 3/1 anyway, making it quite easy to deal with afterwards. This card is nearly strictly better (it’s worse in a way that you e.g. can’t discover it from Shadow Visions or it won’t get discounted by Radiant Elemental), having a 3/2 body on top of the same effect. The 3/2 body doesn’t matter if you’re comboing it with Circle of Healing (it dies anyway), but it will be relevant in many other scenarios.

For example, you can just drop it on T2 as a 3/2. Sure, it’s not the best thing ever, but if you need some board control, or you need to answer their 1-drop but you have no other way to do it, this can be good. Also, you can combo it with Hero Power on T4 if you need a 3/2 that deals 2. Can be solid if you really want to clear something.

It might also make it worth to run Regenerate in some Priest decks. Healing for 3 can come handy at times (e.g. heal up your minion and draw a card from Cleric, emergency healing when you need it), and then you would have four ways to turn it into damage. Obivously, 3 damage for 0 mana is a really powerful effect. You could even combo it with Hero Power on T4 for 5 damage in total – either use it to clear a minion or to burst face. Talking about face burst, if you somehow get to stick Malygos on the board (or revive him), playing this + 2x Regenerate can be a nice 16 damage burst.

I think that Auchenai Soulpriest is a bit better, mostly because it still leaves SOME body after the Circle combo, and the effect lasts for as long as it stays on the board (most of the time it’s positive, although it might not be if you’re running out of health). But I think that you might want to run it in decks that already run Soulpriest, simply for the sake of consistency. But as long as Duskbreaker is in Standard, Circle combos aren’t as necessary. When it leaves, this has a chance to see more play.

Card rating: 6/10, but probably better after Duskbreaker is gone from Standard and Priest will need another mid game AoE