On Tuesday, behind all of the hype around Death Knight, new expansion, Hallow’s End event and so on, Blizzard silently showcased some card changes without most of us even knowing. As it turns out, some of the cards were updated to the wrong versions in the official card database – most of them by mistake, but one of them actually turned out to be true. That’s right – Theotar, the Mad Duke is getting nerfed!

On top of Theotar, we also have another nerf – one to Ice Revenant. It’s an interesting choice, as the card was completely harmless if not useless so far. But it turns out that the internal testing showed that it’s simply too strong with Death Knight’s new Frost specialization, which seems to rely heavily on mana manipulation while using Frost spells. Here are both changes: 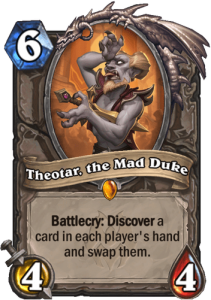 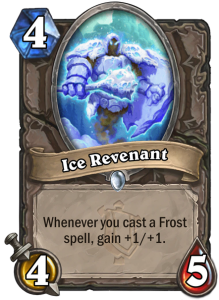 Both changes are going live in Patch 25.0 – we don’t have a patch date yet, but it should be sometime between the final card reveals (November 27) and the expansion’s launch (December 6). If I had to guess, I’d say a week before launch, on November 29.

The Theotar change spotted today on our website is real! He, along with Ice Revenant will be getting nerfed in the 25.0 patch. Any other changes spotted are not happening and were a bug.https://t.co/9P08QIpkJh