Lately, as Hearthstone players have learned that Reno Jackson is in fact a dragon in the big reveal by the end of Galakrond’s Awakening adventure (and even earlier, since we knew that since Chapter 1 thanks to some datamining), many have remembered an old fan theory. We talk about it more in this article, but long story short is that based on a snapshot from One Night in Karazhan trailer, reddit user has concluded that Reno Jackson might in fact be a dragon.

It created a classic chicken (dragon?) and egg situation. Players kept wondering – which one came first, Blizzard’s idea for a plot twist or a fan theory? Did Blizzard plan it all along, or they’ve decide to go for it after reading that (pretty popular) theory? 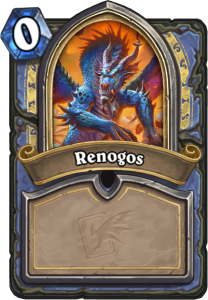 In his interview with PC Gamer, Lead Mission Designer Dave Kosak has shined some light on that conundrum. He confirmed that everything has started as a fan theory. It means that when Karazhan trailer was being made, they had absolutely no plans for Reno to be a dragon. When designing this year’s storyline, they had a general idea of how they wanted it to go, but they still didn’t have an ending. During the time they were finalizing the story (pretty late into the development), community brought up the “Reno Jackson is a dragon” theory once again (since Reno was an important figure in Saviors of Uldum and it was Year of the Dragon after all). Blizzard devs thought that it’s fun and decided to try it out. They created two endings – one with Reno as a dragon and second without. And, after all, went for the former.

They also tried to drop a bunch of clues, hints and easter eggs along the way, but sometimes potentially misleading (such as Learn Draconic spell – on the one hand it might hint at something, but on the other why would a dragon need to learn draconic?).

In the end, it’s really cool that something as silly as a fan theory based on a single frame from a trailer turned into one of the biggest plot points in the history of Hearthstone!