In an interview with PC Gamer, Game Designer Chadd “Celestalon” Nervig confirmed that Jaraxxus will become a Hero card in the Core Set. Finally! Ever since Hero cards were first shown back in Knights of the Frozen Throne expansion, players always wanted the good, old Jaraxxus to become one too. The card’s design has been outdated for a while now and it didn’t see any serious, competitive play in years.

Celestalon also mentioned that “turning on the card is a little different” and that it’s been “balanced accordingly”. Which is also great news – a balanced version of Jaraxxus is something I’ve been waiting for.

How do you think the new version will look like? Are you excited to play Jaraxxus again? 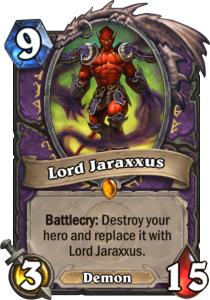