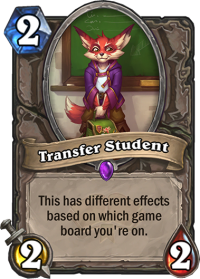 Patch 17.6 was just released, and with it one Scholomance Academy card was released early – Transfer Student!

It’s a very unique card, in a way that you never know what it will do when you add it to your deck. It’s another example of how to utilize the fact that Hearthstone is a digital-only game. That’s because Transfer Student’s effect changes depending on the… game board you’re playing on! And most of those effects are really cool & unique, some of them are really powerful too.

Keep in mind, however, that boards for expansions which have already rotated out to Wild aren’t available in Standard, meaning that you won’t see some of those effects in that format. I’ve bolded Standard boards on the list above.

Celestalon has also confirmed that his effect will get updated for new boards while he’s in Standard. After he rotates out to Wild, new boards will just get a static “Discover a card from X expansion” effect (Source).