If you missed the news, last night Riot Games has announced a new game – a card game. It will be called Legends of Runeterra, set in the same world (and with the same characters) as League of Legends and promises some interesting solutions. Will it repeat a massive success of their recent take on Auto Chess genre – Teamfight Tactics? It’s certainly possible. But let’s take a closer look and see how the new card game will compare to Hearthstone.

First and most importantly, I encourage you to watch this video with that explains the basics and shows some gameplay:

Yes, it’s certainly a bit complicated. That’s why at first it reminded me a bit of Artifact. Both games are trying to translate MOBA mechanics into a card game, so I got similar vibes from watching both announcement videos. However, I have to say that after reading around a bit and seeing some streamers play it, I feel like Legends of Runeterra will be less complex for newcomers (especially since Riot decided against going for the “lane” system), which is a big advantage in a rather competitive CCG market. But, most importantly, what are the main differences (and similarities) between it and Hearthstone?

One of the biggest differences is the turn system. In Hearthstone, players take turns one by one – when you play, your opponent can’t do anything to respond (Secrets are the only way to interact with your opponent on their turn). In Legends of Runeterra, turns are asymmetrical, but both players can perform actions at all time. When a turn starts, one player is assigned to offense and other to defense. Next turn the roles switch. Players can play allies (which are Hearthstone’s minions) and spells even if they’re a blocker, but it’s the offense player who decides how the turn goes exactly. Offense player can always pick between playing a card and attacking with whatever he already has – if he plays a card, then defense player can also respond by playing a card. When offense player chooses to attack, defense player can choose blockers (which means that he can no longer play more allies or slow spells). After declaring blockers, there’s one more phase that lets both players use a part of their spells (like instant-speed buffs, removals etc.) which can change the tide of combat. 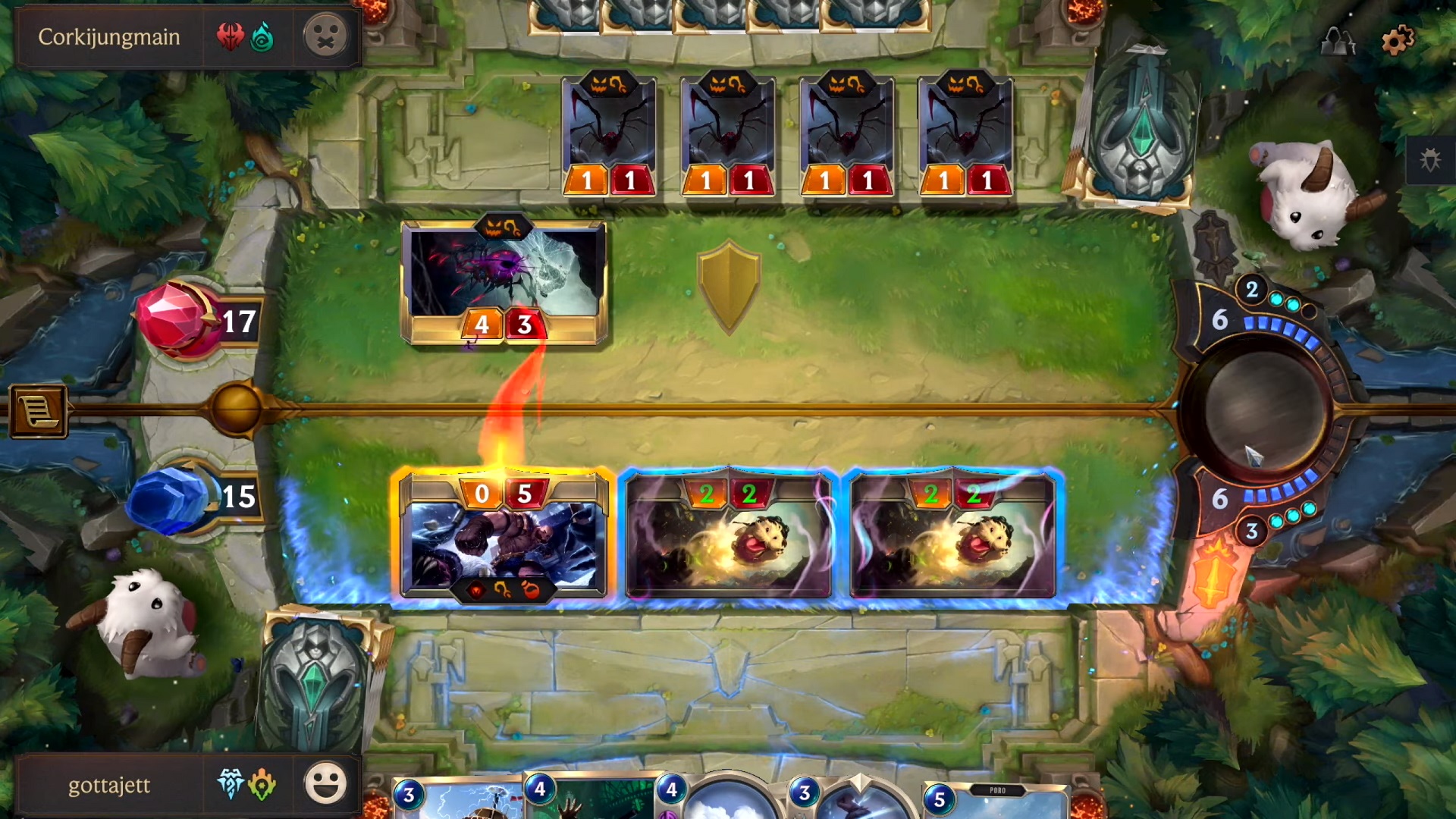 Legends of Runeterra has a very similar mana system to Hearthstone. Both players start with 1 “mana crystal” and get an extra one each turn. Which means that just like in HS, they have 1 mana available on Turn 1 and 5 mana on Turn 5. The only major difference is that there’s some mana carry-over between turns. When you end a turn with a single mana point, it’s turned into so-called “spell mana”. Next turn you can use that mana, but only to cast spells – not to play more allies. You can have up to 3 spell mana at the same time – anything above that won’t carry over and will disappear. With spell mana, you can decide to make a weaker play this turn in order to save some mana in order to cast a stronger spell next turn.

Each player has a Nexus, which is a bit like Hero in Hearthstone. Both players start at 20 health. In order to win, you obviously need to get your opponent down to 0, but there are some additional win conditions – think of something like Hearthstone’s Mecha'thun. There are cards that, if certain conditions are met, win the game immediately (which means that the opponent will try to disrupt those and not let them happen) The combat system is closer to MTG than HS, since the player who’s on the offense is not choosing what he attacks directly – he just declares attackers. It’s up to the other player to pick blockers or let the damage go through. A key difference is that ally combat is 1v1 – you can’t declare multiple blockers for the same attacker like you could in MTG. Unlike in MTG, however, and just like in Hearthstone, ally (minion) health does not regenerate between turns. When you get a bigger ally down low, the health will stay at that level, making it easier to get rid of it next turn. One more important distinction between Runeterra and two games I’ve mentioned is that in the Riot’s new card game there is no “summoning sickness” – allies can attack immediately. Another thing is that you don’t have to declare allies as attackers – if you don’t feel like attacking, they can sit still in your “tray” (honestly I have no clue how it’s called in the game) and wait for the right moment. It might be a good idea to gather allies over multiple turns and then perform a massive attack when you get the right opportunity.

Of course, allies and spells have many different keywords, effects etc. – some of which are similar to what we’ve already seen in other games – but we won’t go deep into that. What we want to cover, however, is that spells will be divided into three categories – slow, fast and burst. Their category changes the way you can play them – slow spell can only be used before or after combat (so no mid-combat shenanigans), fast spells can be used at any time, but will also switch the priority to other player (so they can answer it), and burst spells can be used at any time during your move, without disrupting your turn – with those, you give your opponent no way to respond. From what I’ve seen so far, those “combat tricks” are very common and can sometimes create quite long back-and-forth chains of events. You declare something as a blocker and buff it to get out of range of whatever you’re blocking – opponent decides to buff his own ally – you play a spell that gives your ally a barrier (it works like Hearthstone’s Divine Shield) – your opponent seeing that he will no longer win the fight kills your ally with an instant spell. Of course, those chains of require a lot of mana and multiple cards in the hand, but will certainly happen, giving you a chance to “outplay” an opponent and making hand reads very important. 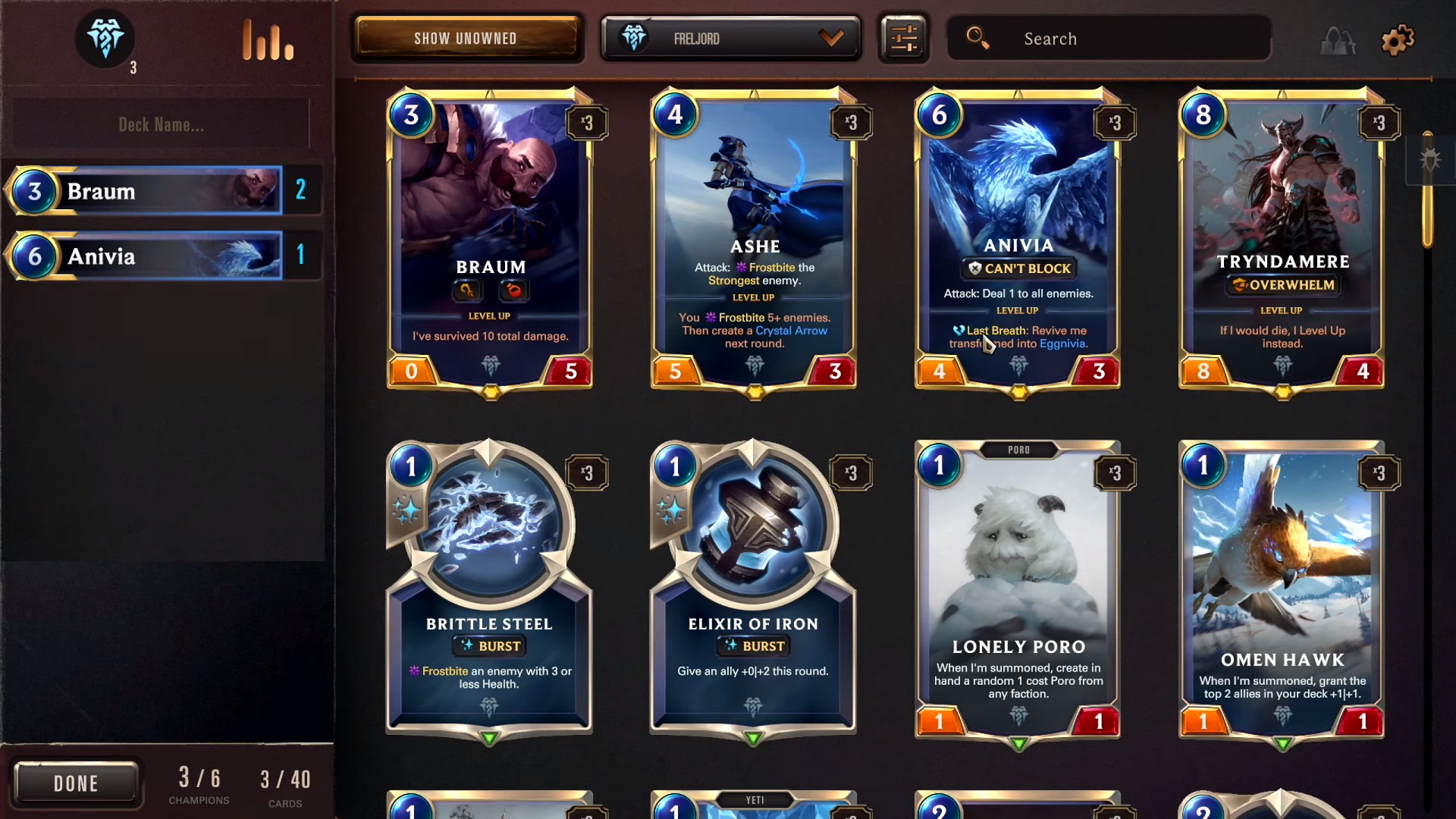 In terms of deck building, the game works mostly like your average CCG. Instead of Hearthstone’s classes or MTG’s colors, card are divided into regions – the countries / nations they’re from in the world of Runeterra. Decks will contain 40 cards that are from up to 2 different regions (there are 6 regions in total to pick from). Which means that you should have a bit more freedom than in case of Hearthstone (which only offers a single class + a pool of shared Neutrals to build a deck), but not as much as in Magic (where you can mix all five colors as much as you want, but going that many is rarely a good idea anyway). You can put up to three of the same card into your deck, which is exactly between Magic’s four and Hearthstone’s two.

What’s important during deck building are Champions and their level up system. Champions are allies with powerful abilities and an opportunity to level up in order to increase their strength even further. Level ups work like a shorter (and usually easier) Hearthstone’s Quests. After a champion is played, you need to do X or Y in order to level it up. Depending on the champion, it might be casting X spells, killing X enemies, attacking opponent’s Nexus X times and so on. Leveling champions up seems to be important part of many strategies. You can only have up to 6 champion card in your deck, so you will need to choose wisely which ones support your strategy best.

Crafting system is a bit like a combination of the one present in Hearthstone and MTG: Arena. You have two ways to craft individual cards – with Shards and Wild Cards. Shards work just like Arcane Dust from Hearthstone – you get it from getting rid of extra cards. And Wild Cards work like MTG: Arena’s Wild Cards – you can turn a Wild card into a card from that rarity directly (e.g. if you have a Rare Wild Card, you can turn it into any Rare Card). If done right, combination of those two systems is really smart. Because both of them have their own problems, but together they can work quite nicely. 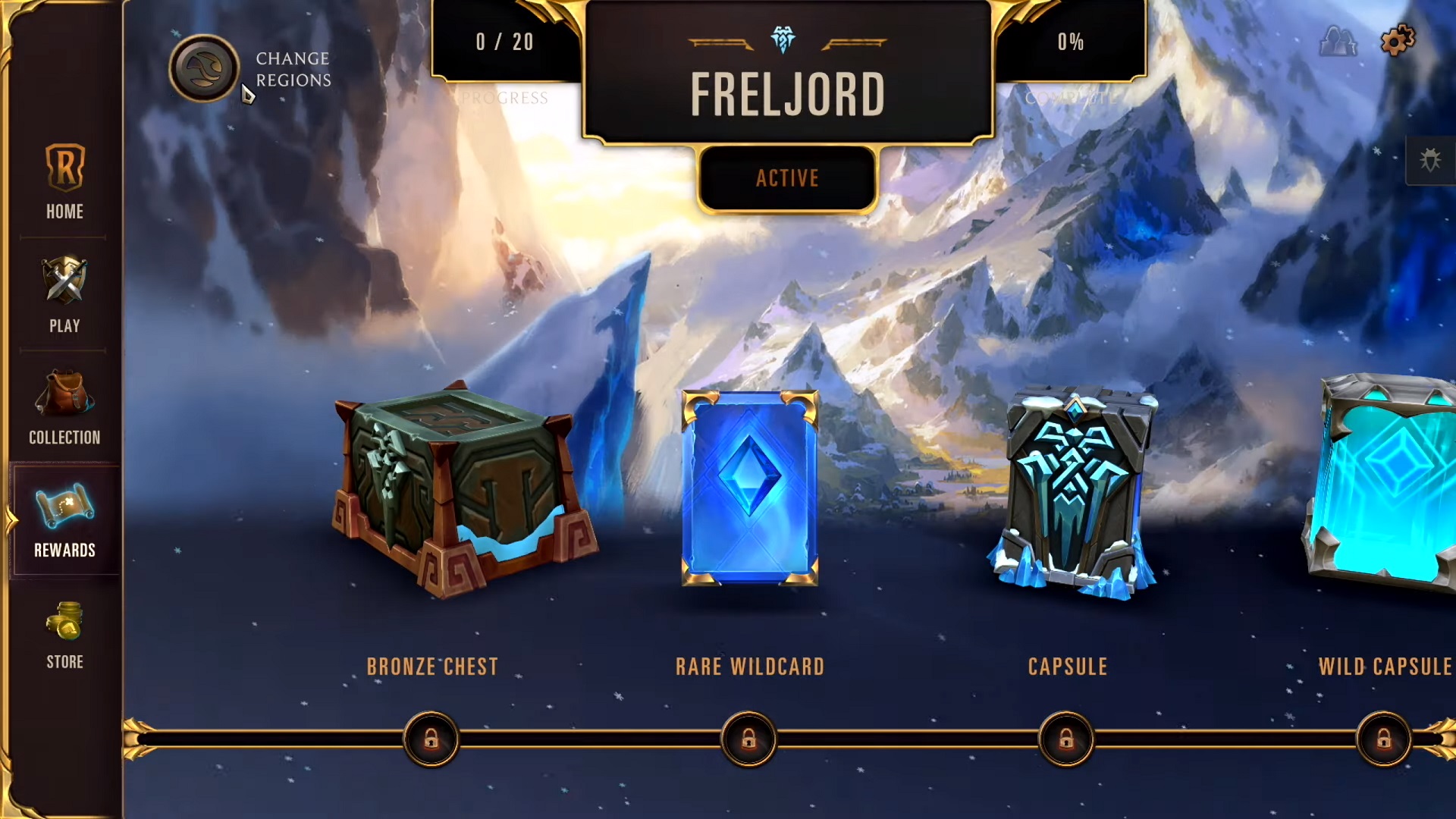 The game is F2P to start with – you don’t need to buy anything to play it. Players will be able to unlock new cards by “leveling” story lines (earn XP for finishing matches with a certain story line selected to earn rewards from it) + a weekly vault, offering massive rewards (it seems that the vault also progresses as you play more matches, so the more active you are, the better rewards you will get up to a certain point). Players can also, obviously, buy cards with coins, which is an equivalent of real life money. What I really like is that instead of buying whole packs like in HS, in Runeterra you will be able to buy a single Wild Card and then craft the card you need. It would be a bit like buying Dust (at a better rate than what you get from packs) directly in HS store. In order to decrease the gap between F2P and paying players, there’s also a limit on how many Wildcards you can buy with real money each week. You can still buy as many cosmetics as you want. This system means that paying players won’t be able to buy all cards as soon as they start playing and own other new players with full decks while they still play with starter cards.

We don’t have any hands-on experience with the game yet – it has just entered a testing period, where only chosen players (and streamers). It’s also far from complete – for example, they’ve announced a Draft format (equivalent of Hearthstone’s Arena) that is not available yet. There’s also no Ranked format yet, but it will obviously be available (and most likely work similarly to how it does in League of Legends or Teamfight Tactics). The first testing period lasts for only 5 days, until October 20. The second one will also be that short and will be available November 14-19. Early in 2020, we will get an actual closed beta, with a release planned for later 2020. What’s important to note is that Legends of Runeterra will get a mobile version on launch. This is a part where some other HS competitors failed – a big selling point of HS is the fact that you can play it either on PC or on mobile and that the progress carries over. A quick mobile launch means that new Riot’s game might threaten Hearthstone not only on PC market, but also on mobile.

But what does it all mean to Hearthstone players? There are three most likely outcomes:

To be honest, the third option would be most beneficial. Not only players would have more choice in terms of what games they play, but a successful competitor will always force the previous “king of the hill” to improve in order to stay on the market.

And what do you think about the game? Did you get a chance to play it already? What are you first impressions after watching videos and streams of it? Do you think that it will replicate the success of TFT or maybe will quickly be forgotten like Artifact was? Let us know in the comments!