Early Forged in the Barrens definitely had its fair share of random outcomes thanks to the prevalence of Deck of Lunacy. After the nerf, Deck of Lunacy is mostly gone, even while No Minion Mage as an archetype has continued as one of the better decks in the game. Randomness as a whole, however, has not gone anywhere.

The main representative of random outcomes in the current Hearthstone meta is Priest. The deck is one continuous stream of random effects:

When playing against Priest, I have at times been unprepared for the seventh Sethekk Veilweaver or the fourth Soul Mirror. With more careful use of resources, perhaps such threats could have been answered effectively.

A Priest deck can easily play more generated cards than cards from the deck during a game.

While Priest is strong at the moment, it is not the best deck in the game. In fact, better decks such as Secret Paladin and Rush Warrior, contain fairly little randomness in them. Clearly, random resource generation is not the most powerful feature in the current meta. However, it can still be problematic.

Randomness can be problematic when the outcomes differ from each other significantly: while a card may be balanced on average, its effect in individual games can provide huge swings that win or lose the game on their own. 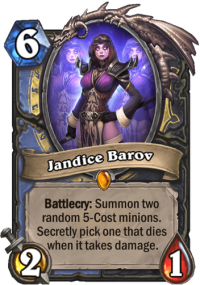 Jandice Barov is a good example of high variance. Jandice’s low-roll is a 1/1 Blood Herald, and her high-roll is a 7/8 Earth Elemental or game-changing value from the additional resources generated by Envoy Rustwix. Interestingly enough, Jandice had even more variance during Madness at the Darkmoon Faire, but she became more consistent and even more powerful after the rotation. This increased power led to her mana cost being increased from five to six, and yet she is still a great card. Blizzard was not worried about a strong card with high variance and only chose to intervene when the power level increased further.

Runed Orb is another good example. It is currently played in slow burn decks, and there are not that many direct damage spells in the game. Consequently, whenever you manage to discover Apexis Blast or Fireball from Runed Orb, your odds of winning that particular game increase by as much as ten percent.

These types of random outcomes do not seem to bother the developers. Even when cards are strong and swingy, they are fine as long as they do not become absolutely dominant like Deck of Lunacy did before it was nerfed.

On the other hand, Blizzard is well aware that repeatable random resource generation can be oppressive. Dragonqueen Alexstrasza was the key moment, as she was initially changed to not be able to generate another copy of herself, and later this was turned into a general rule that prevents Discover cards from discovering new copies of themselves.

However, this does not prevent more indirect forms of resource-generation chains from happening. Some examples of such chains include the following:

The existence of repeated random resource generation can make it nigh impossible for a deck to run out of resources, and given enough time, can result in answers to almost all situations. While this does not make the decks with random elements the best ones, it can have a major effect on the overall meta: the slower your deck, the more you are exposed to repeated random generation, and the better the odds that a deck full of randomness can answer all of your threats. As a consequence, playing faster decks is preferable, when it is not possible to play around random things.

Are Cards Strong Because They Are Random, or Are They Just Strong? 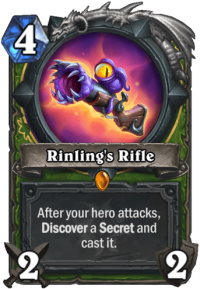 Rinling's Rifle‘s Secret pool was greatly diminished by the rotation. There are far fewer conditions to check for in Standard without cards like Snipe and Pressure Plate in the Hunter Secret pool. The Secret pool did not grow any stronger on average, either. Yet, Rinling's Rifle continues as one of the strongest Hunter cards in the game. Getting a free Secret, any Secret, into play from the weapon is just that strong, even when the overall pool is weaker now.

First Day of School has a bunch of variance included: it is not quite the same to pick up an Imprisoned Gan'arg as it is to get a Safety Inspector. You may even gain access to Mage spells through Wand Thief. However, almost all outcomes of First Day of School are just insanely powerful. Using one card and zero mana to get access to two one-cost minions is just really, really strong. The random aspect of First Day of School is a minor part of its overall power. (Note: That part was written before balance update, but I’ve decide to leave it, because the point still stands.)

As randomness in the game increases, the skill cap becomes lower. It becomes impossible to play around all the random outcomes, and the edge you can gain in the game becomes smaller.

When extraordinarily strong random outcomes exist, games are simply decided by them. It does not matter what the opposing player does when one player rolls high enough.

When significant resource generation exists, decks that use it get to play with near-infinite resources, which drives slow decks out of the meta as they cannot keep up. This makes the meta faster and more aggressive as a response.

We can see all of these effects in the current state of Hearthstone. The level of skill one could display in the original game was higher than it is in the current Standard format. If you take a good look at Hearthstone esports, you can see how there are more non-games now compared to a few years ago. Skill can still decide games, but the advantage a good player can gain over other competent players is smaller than before.

We are also seeing a smaller number of different archetypes than before: almost all decks are some form of aggro decks that can snowball an early advantage and finish the game in just a few turns if everything goes perfectly. Combo decks are almost gone, with Lifesteal OTK Demon Hunter the only one trying to get something done. Control decks are almost gone, with Control Warlock slowly fading away and Control Priest being the only competitive control deck. Traditional midrange decks do not exist either: Midrange Demon Hunter is the closest thing to a midrange deck in the meta, and it is struggling as well.

Random resource generation is not the only contributing factor to this development, but it is one major reason.

However, does it matter?

Decks may be more uniform than before, but the game is faster-paced. Keeping the game fast can be good and attractive to players.

Randomness may lead to a less skill-intensive environment, but it can also generate flashy moments that did not exist in vanilla Hearthstone. The things that can happen in the game right now are mind-blowing compared to what was possible before. Blizzard has clearly embraced these spectacular moments with their decisions to not touch high-rolling random effects unless their overall power level becomes too strong: they are fine with individual games being decided in big explosions as long as they do not decide all games.