The Dalaran Heist is out! It’s the biggest and most ambitious single player content Hearthstone ever had. And at the same time, it manages to be one of the most challenging ones. Or, to be more precise, most challenging one when you’re playing in Heroic mode. After spending long hours grinding the first chapter on both difficulties, I have to say that the balance is great. Casual players should not struggle in Normal mode, but they will still have to work for their wins. Veteran players should breeze through the Normal mode, but then Heroic mode will be a real challenge for them – something that was missing from the previous Hearthstone’s roguelike adventures.

Dalaran Heist’s second chapter leads into the Violet Hold, the famous prison of Dalaran, guarded by the most elite members of the Kirin Tor. In the second part of his great scheme, Rafaam plans to uncage the monsters locked away so that they can help taking over the city. Of course, the powerful mages of Dalaran want to have a word with you about that – and not only that! The imprisoned monstrosities can’t tell right from wrong, so they’ll attack you too!

With both sides trying to disrupt Rafaam’s evil plan, the Heroic mode of The Violet Hold turns into a great challenge that tests your deckbuilding and gameplay capabilities. 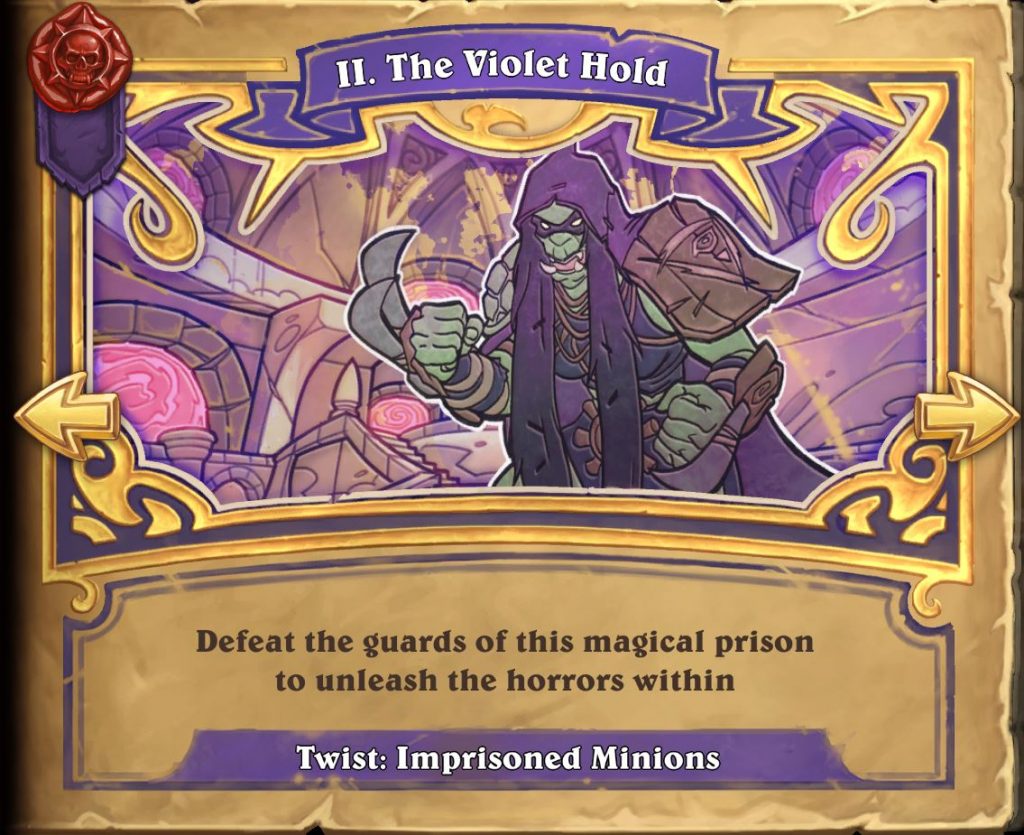 Each of The Dalaran Heist chapters has its own so-called “Twist”. To put it simply, it’s a mechanic, which makes it stand out and bring part of the story into actual gameplay. It’s also something you need to take into account when building your deck and playing it – especially when we’re talking about Heroic format.

In Chapter 2, the twist called “The Prisons” puts a dormant minion on the board for each player. Depending on the mana cost of the card inside the prison, the minion will break free. So if your prison contains Infested Wolf, this minion will become come into play at the beginning of turn 4. The imprisoned minion will be completely random.

Unlike Cache of Cash in Chapter 1, the prison twist really doesn’t require that much player interaction. The player can’t control what and when the minion is going to escape its prison.

There are several things to take into consideration playing The Violet Hold on Heroic Mode. First off, you need to remember that you’ll have one less slot on the board for the majority of the game. That may sound trivial in the first place, but it’s hard to not keep the habit of calculating things with seven minion board slots in the back of your head.

Secondly, you can prepare for the time your minion is going to become active on the board. That way you can take advantage of board buffs through cards like Fungalmancer or Dire Frenzy, or you could bounce back high-value Battlecry minions with something like Youthful Brewmaster.

Positioning is an important matter as well, of course. Placing minions like Flametongue Totem correctly is essential to get full use out of your prisoned minion. That makes preparing for a potential prison threat on the opponent’s board much easier in case it breaks out the following turn as well.

Last but not least, you can use this mechanic to your advantage thanks to one fact: You will always start the turn against the boss. That will give you the advantage of opening the prison first if your minions have the same mana cost! 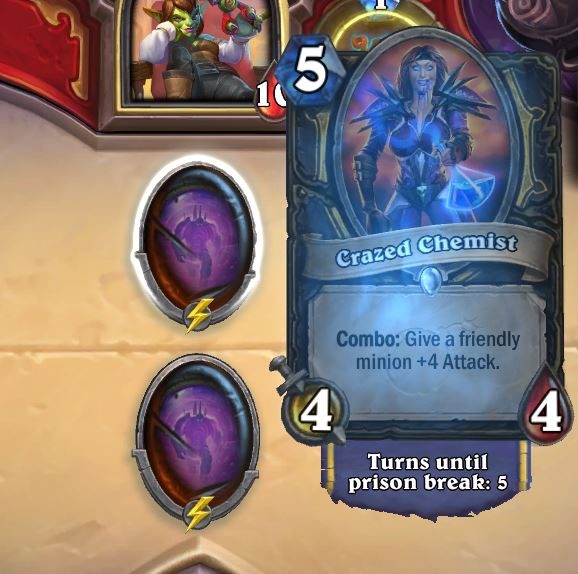 In this section, we’re going to get deeper into the general strategy you might want to take when going into Chapter 2. If you’re looking for specific boss guides, click here.

The chapter-specific strategy for The Violet Hold doesn’t really revolve around the twist mechanic, as it is pretty much non-interactive. It is much more important to know what bosses will possibly be present during your run.

While it might be unfortunate that the prison mechanic doesn’t really add as much to the run through Chapter 2, we can continue to focus on efficient deckbuilding to be able to beat the most prominent bosses in The Violet Hold!

Most of these new bosses play a role in the Violet Hold 5-man dungeons of World of Warcraft. Mallificient Manastorm for example, which is also Millhouse Manastorm’s wife, is one of the bosses you can face with your WoW hunting party, as well as the core hound Lavanthor. Lieutenant Sinclari on the other hand guards the entry of Violet Hold.

You can read an extensive guide on every single Dalaran Heist boss here. Another great source of information is the Violet Hold NPC list on our sister site wowhead.com; there you can find all bosses listed, and if you try to build your deck around beating bosses like Lavathor or Mallificient Manastorm, your Violet Hold Heroic Mode run will be a piece of cake!