The Arena is one of the three PvP modes currently available in Hearthstone (the other ones being Constructed and Tavern Brawl). If you’re coming from another card game, Arena is similar to the “draft mode” present in a number of them. Unlike Constructed, where you can build your own deck with the cards in your collection, Arena doesn’t let you choose from all the available cards. You play with unique decks, drafted card by card specifically for this mode from the pool of Standard cards (with a few exceptions) and following a slightly different ruleset.

After selecting 30 individual cards, you’re then matched up against opponents.

The Arena run finishes when one of the two conditions is met – either you get to 12 wins (and get the best possible rewards) or you lose three games and your run ends no matter how high you got. Which means that the run can end at 12-1 or it can end at 4-3. The higher you get – the better rewards you earn. You can also terminate any Arena run prematurely by pressing the “Retire” button. Rewards are counted for the score you ended up with (so if you retire at 0-0, it counts the rewards for 0 wins).

Players are generally matched against others with very similar scores to even the chances. If you’re at 2-2, the game will try to look for another 2-2 player, but if it fails to find one, it will broaden the search and include the similar 1-2 and 2-1 players. At a lower number of wins, you can be nearly sure that you’re playing against someone with the same score. However, if you get past seven wins, especially during off-hours, the matchmaking gets a bit looser.

How to Play the Arena

Important: If you have just started, you can’t play the Arena until you unlock every class, that should be the first thing to do after you’ve started playing! 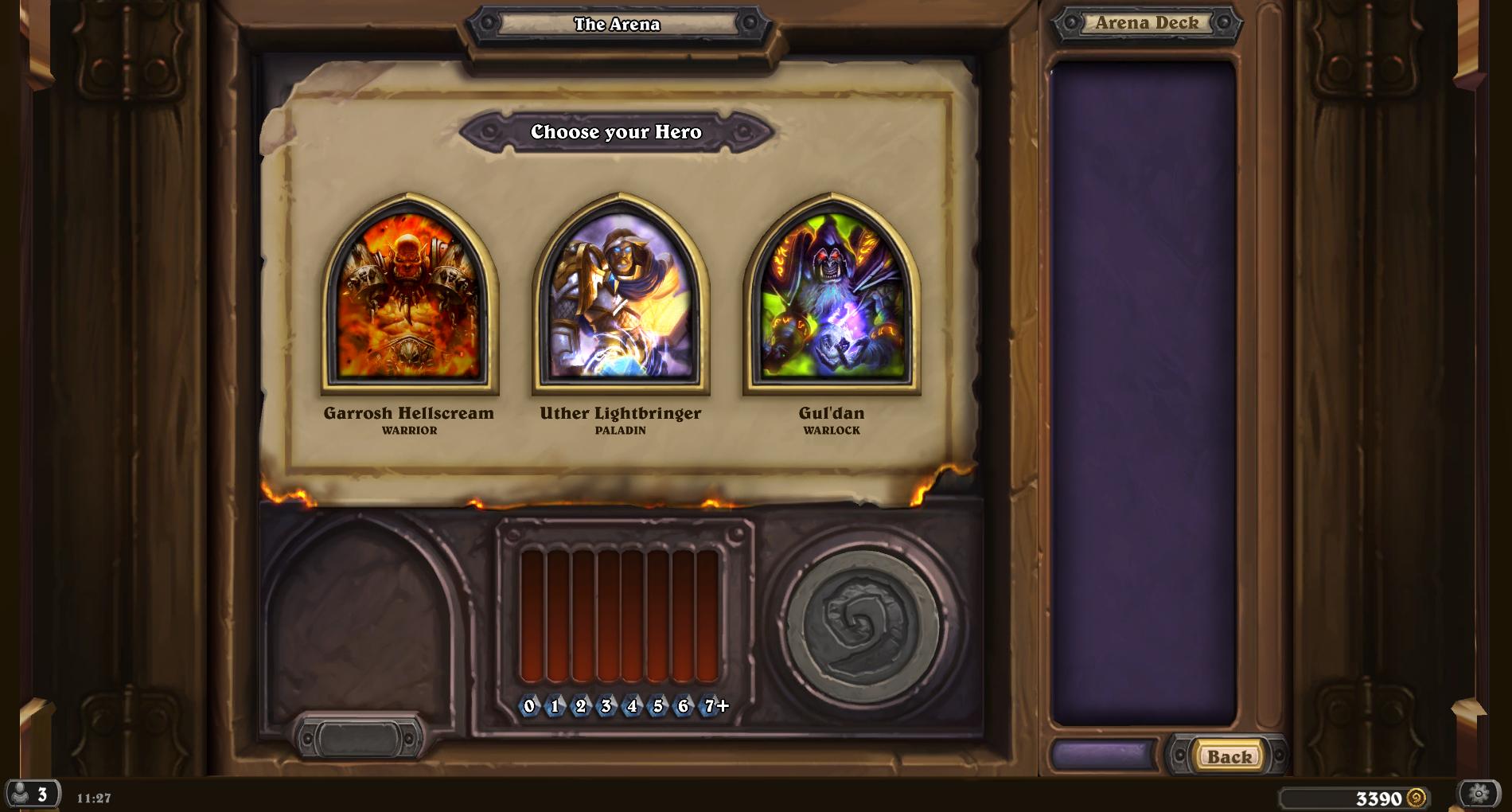 To start Arena run, just click “The Arena” in the Main Menu of the game. Then pick one of the two payment methods – Gold or real money. Each Arena run costs either 150 Gold or $1.99. Your first Arena run is free, so you can try it right away or save it for later.

After you’ve paid for the Arena, you pick a class you want to play. You always get to choose one from the three random classes. There is no way to reroll them other than retiring early, but this is not recommended. Classes are only loosely balanced in the Arena, with some weaker and others are stronger, but that’s a topic for another article. After selecting a class – you start your Arena draft.

Drafting Your Deck and Playing It

Drafting is the most complex process of Arena runs, but it follows the same rules every time, so after doing this once or twice you should know how it works. 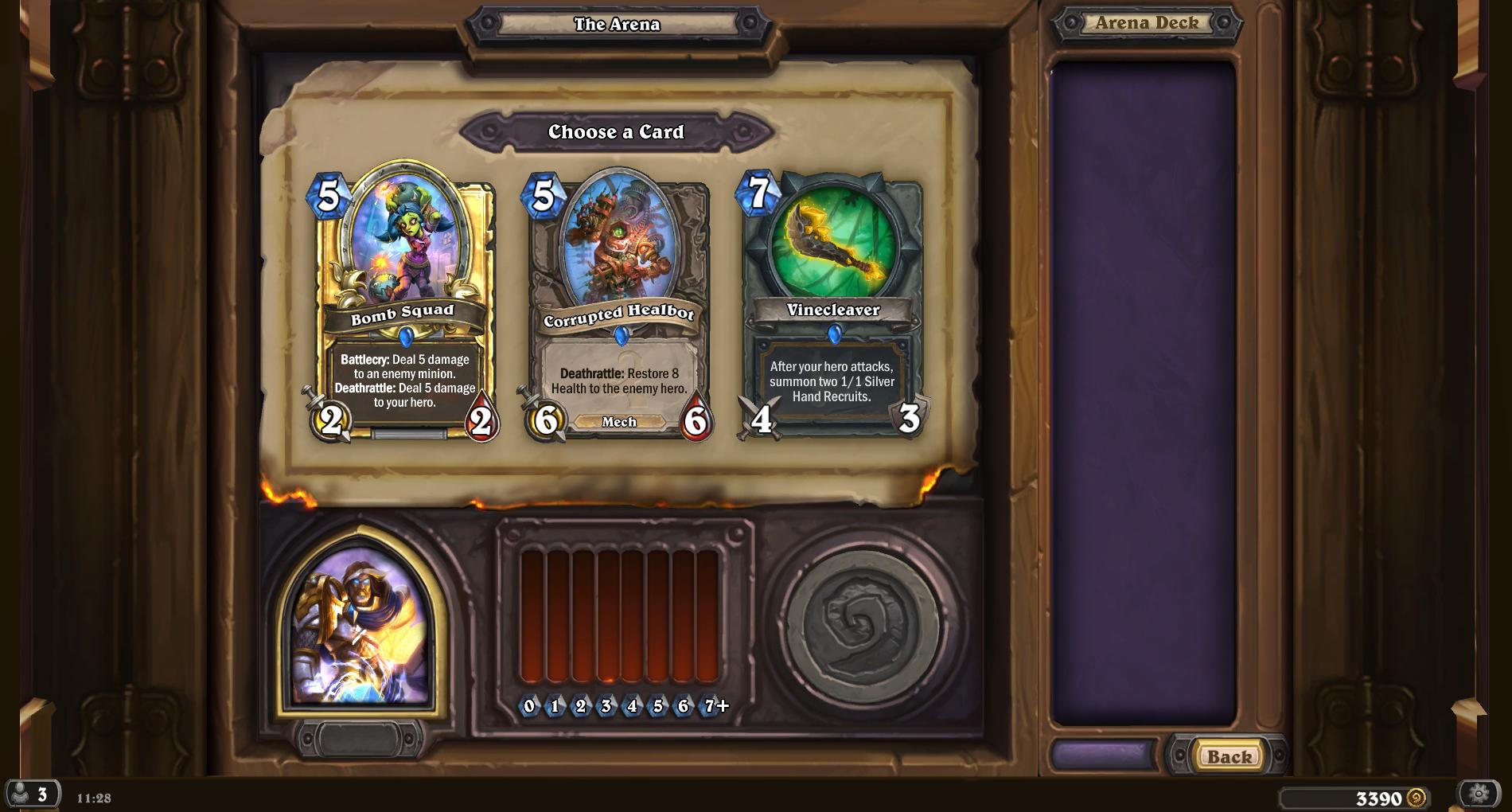 Each deck consists of 30 cards with varying rarities. You pick cards one by one out of the three that are presented to you each time. Luckily, you don’t have to own the cards to be able to pick them.

The three cards are always of a similar power level, but can have different rarities. Legendaries are the only exception – they will also get offered with other Legendaries.

Four of the picks (1st, 10th, 20th and 30th) are always at least Rare (with a higher chance of being Epic/Legendary). The other 26 cards can be of any rarity, with Commons appearing most often and Legendaries least often (68% for Basic/Common, 20% for Rare, 9% for Epic and 3% for Legendary). 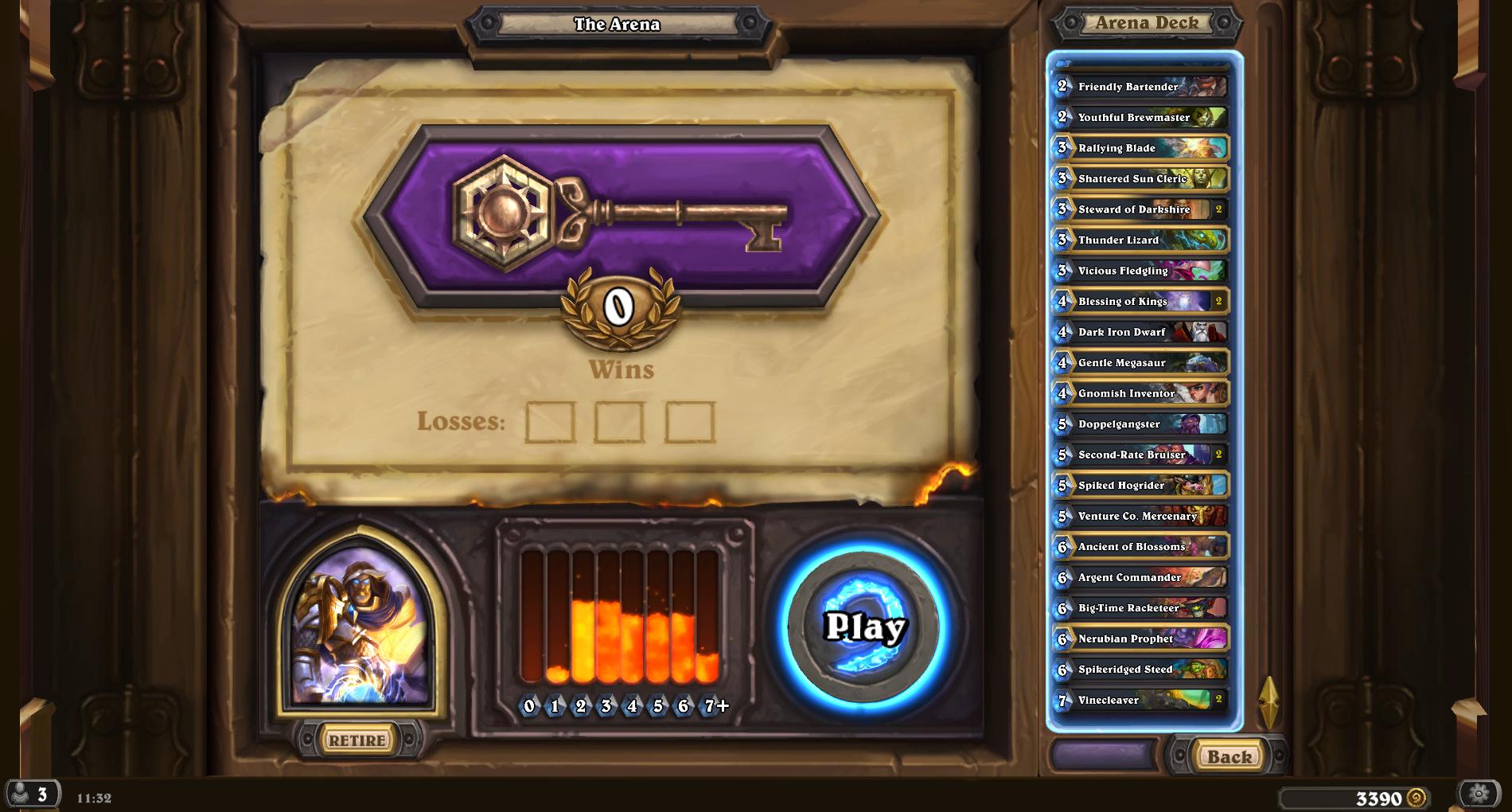 Those are the basics of the Arena draft, but each draft follows a bunch of other rules to make the Arena fairer and/or exciting. If you’re a new player, you don’t have to memorize them, but they might be useful once you play more:

To learn more about that, including all the cards that are currently banned in the Arena, head over to the “Current Arena Rules” post!

If you don’t have a lot of experience and you don’t know which cards are good in Arena, you can use one of the Drafting Tools like HearthArena or ArenaDrafts. They will help you with the choices by attaching scores to each card, highlighting synergies and trying to fix common problems like mana curve, lack of removal cards etc.

Be careful when picking the cards – each choice is final and you can’t change your mind after you click on a card. You finish the draft once you pick the 30th card. Once your draft is done, you can start playing. There’s no special information for playing the matches – they follow the standard Hearthstone rules.

Like I’ve mentioned before, matchmaking will try to put you against other players with a very close score, but it doesn’t always mean that they will have a deck with similar power to yours. Sometimes a good player might carry a mediocre deck up to 12 wins, and other times you can meet a powerful deck at 0-2 just because your opponent isn’t a great player or they drew very poorly in his previous two matches. You rarely play against the same player twice in a row, but it can happen, especially if you’re at the higher score (e.g. 10 wins) and you play during the off-hours.

Matchmaking is a little more forgiving for new players during their first few Arena runs – it matches them with players who have a bit lower of a score. It also tries to match new players with other new players if possible. 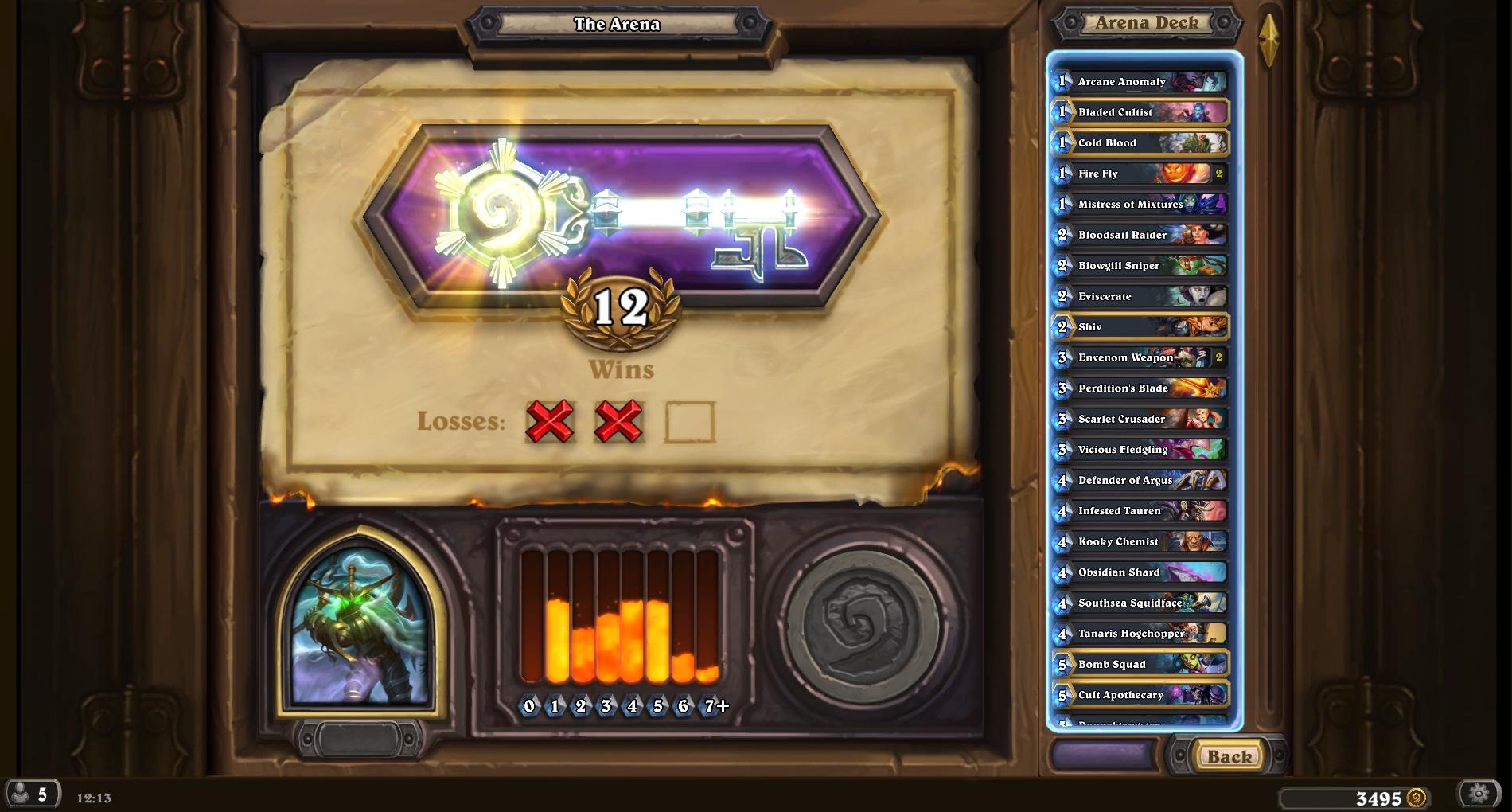 Your run finishes when you hit 12 wins or three loses, whichever comes first. If you disconnect, it counts as a loss. If the match ends in a draw (both player die simultaneously), it counts as neither a win, nor a loss – the score stays the same as before the match.

Alternatively, you can retire any draft at any point after you’ve picked all 30 cards. Retiring means that you finish the run immediately with current score. The most common reason to retire is drafting a very weak deck and not wanting to continue playing with it. From an economic perspective, it’s generally not worth it to retire drafts prematurely. There is always a chance to get an extra win or two which can increase your rewards. But since the game is mostly about having fun – if you really don’t like a certain draft, you can just retire right away and try to get a better one. You’ll still get a significant amount of your investment back even at zero wins.

After finishing Arena run, you get the rewards, which scale up with the number of wins you had. The number of wins is the only factor that matters when it comes to the rewards – the class you’ve played, previous runs, number of losses and whether you’ve retired or not have no impact on your final prize. 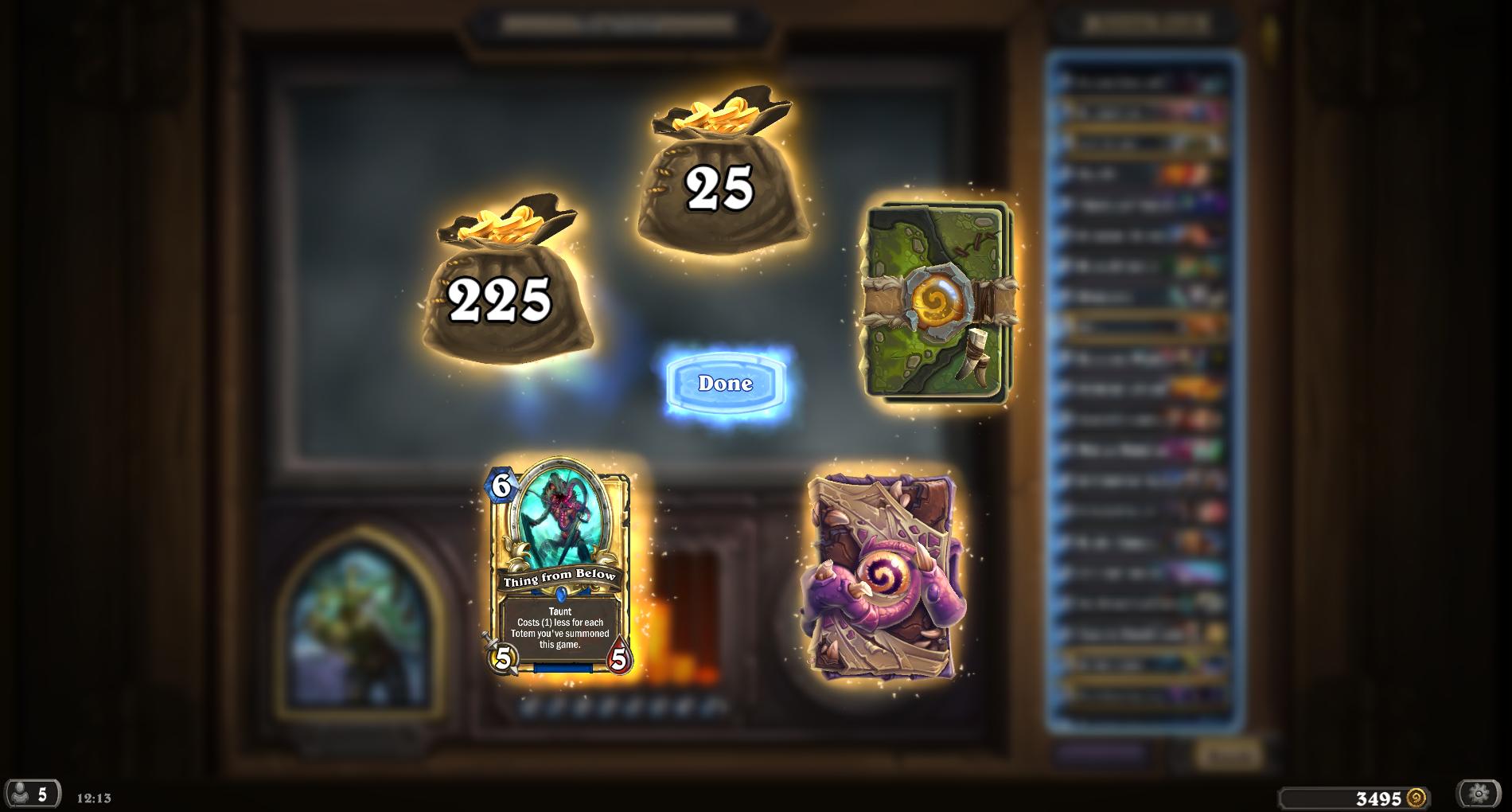 Speaking of rewards, the first thing you need to know is that you’re guaranteed to get a card pack from the latest expansion and another random reward even if you fail to win a single game. Going 0-3 is obviously not great, but it should return about 75-80% of the initial 150g investment. Here is how the rewards generally look like for each of the keys (number of wins):

3 wins – 7 wins: One card pack, guaranteed gold reward (growing with the number of wins, up to guaranteed 150 for seven wins), one random reward

The guaranteed card pack is always from the latest expansion. Card packs from random rewards are always from another Standard expansion. Random rewards can be pretty much anything – Gold, Arcane Dust, Cards and Card Packs. They also scale up with the number of wins – the higher you get; the better random rewards are. For example, a possible random reward for five wins is 45-60g, while a similar random reward for 11 wins is 65-205g. Similarly, the rarity of random cards also stacks with the number of wins – you can only get a Common card when you end up with zero wins, but finishing ten can even give you a Golden Legendary, however rare it may be.

Is it Worth Playing the Arena?

Answering this question might be difficult. The first and most important thing is whether you enjoy playing Arena. If you do, then it’s worth to play it even if you’re losing gold.

When I was a new player, I mostly played Arena, because it was much more fun – I could play around with all those cards I didn’t own. I still mostly play Arena because I simply enjoy the mode. So, if you also enjoy it more than Constructed – then play it!

On the other hand, if you don’t like Arena, if you hate the draft mode, then you probably shouldn’t play it even if you’re doing quite well – after all, what’s the point of playing the mode you don’t like? However, there is also another kind of “worth” when it comes to playing Arena. When is it worth to playing if you want to profit from it?

To profit from the Arena, your run needs to end at somewhere around three-four wins (depending on the random rewards you get). At this point, the card pack and other rewards start to be worth more than the 150g you’ve spent on the Arena ticket. If you play Arena for the rewards and you can’t get to three-four wins consistently, then it’s not worth to play it and you’d be better off playing Constructed and spending your gold on the card packs instead.

There is a point when Arena starts to pay for itself though. At seven wins, you’re guaranteed to get your whole Gold investment (150g) back on top of a pack and another random rewards. Getting to seven wins consistently is called “going infinite” in Arena. It basically means that the player can sustain their Arena runs by only playing Arena over a long period of time.

Given the random nature of the Arena drafts, only the best Arena players can go infinite. But if you can accomplish such a feat, you will be able to progress much faster than those who simply play Constructed. While it depends on the time you spend in the game, infinite players can often earn two or three extra card packs every day just from playing Arena.

If you’ve just started your journey with Hearthstone, it’s almost impossible for you to go infinite. It will require a lot of game knowledge and months of practice. If you find Arena fun and want to play the mode, your first goal will be to at least break even and manage to get to the three-four wins consistently. Once you do that, you will be able to play Arena while actually progressing faster than people playing Constructed.

Interested in some more reading? Check out our guide for the current Arena rules. It details all of the banned cards, draft rate adjustments, and more!