In the blog post below, Blizzard explains how the new Hero card Galakrond works! Here’s a quick summary:

Despite the valiant efforts of the League of Explorers in Uldum, Arch-Villain Rafaam and the League of E.V.I.L.’s nefarious plans have come to devastating fruition. They’ve escaped Uldum with the Plague of Undeath and twisted its ancient power in order to resurrect the most powerful draconic force the world of Azeroth has ever known – the progenitor of dragonkind himself, Galakrond!

Read on for details on what to expect of Galakrond’s grand entrance into the world of Hearthstone before he’s added to your collection with the launch of Descent of Dragons on December 10.

The resurrected proto-dragon Galakrond manifests as five unique Hero Cards for the League of E.V.I.L. classes: Rogue, Warrior, Warlock, Shaman, and Priest. Like existing Hero Cards, playing Galakrond will replace your current Hero and Hero Power, grant some Armor, and trigger the card’s Battlecry. However, there’s much more to Galakrond than a traditional hero card:

Throughout a match, Galakrond can be upgraded into more powerful versions of himself by playing cards with the new “Invoke” keyword. Invoking Galakrond twice takes him from his base form to ‘Galakrond, The Apocalypse.’ Invoking two additional times will take him to his final, most powerful form, ‘Galakrond, Azeroth’s End.’ Upgrading to each new form doubles the power of Galakrond’s Battlecry effect and playing Galakrond in his final form additionally equips a 5/2 Claw weapon that you can use to swiftly lay waste to your opponent. Once Galakrond is played and his Battlecry has been unleashed, he can no longer be upgraded through Invoke cards, though they will still trigger the Invoke effect.

To give an example of what this winged terror brings to the board, here are the three transformations of ‘Galakrond, The Unspeakable,’ the Priest manifestation of the powerful progenitor of dragonkind.

In addition to progressing towards his next transformation, whenever you play an Invoke card, Galakrond (wherever he may be) will also grant an activation of his Hero Power. As an example, casting Seal Fate will not only deal 3 damage to an undamaged minion, but also add a random Lackey to your hand, since that’s the Hero Power gained when you play the Rogue manifestation of Galakrond, ‘Galakrond, The Nightmare.’ 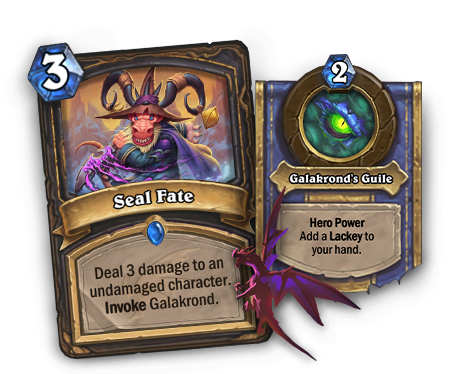 Now let’s go over some details to help you understand some interesting situations you may encounter with the new Galakrond cards. Hopefully this section doesn’t drag on.

We can’t wait to see what devastation you’ll unleash once you have your hands on Galakrond. Good luck, and we will see you in the Tavern!