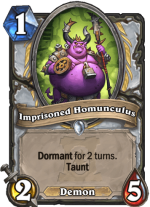 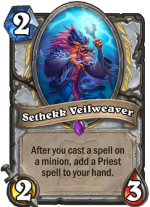 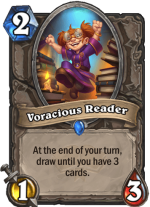 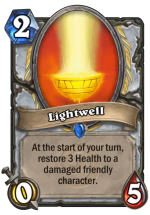 These are all great to start with. I'll play the Homonculus before the Obelisk just to get it out there early. Voracious can sometimes boost your hand early. Noting like 3 cards on turn 3. Sethekk can sometimes refill a hand early as well. Lightwell is just great because it can mitigate some early game damage charging the Obelisk. They are forced to kill spend time killing it. Because it isn't scary a lot of times it doesn't draw much attention until you throw a Power Word Shield and an Inner Fire. Now it's a real issue early on. Can't deal 7 this turn, then watch it heal itself or you next turn.

This is something I’ve been tinkering with that’s shareworthy as I haven’t seen anyone else playing it, and I think it’s pretty entertaining.

The concept is a lot of small creatures with good synergy coupled with lifegain. The opponent has to choose which way to go. Damage either way without clearing the board just gets me closer to the charging the Obelisk.

There’s also lots of card draw to refill your hand with the Sethekk Veilweaver or Voracious Reader, and if they die then drop a Raise Dead.

Everything else is mainly boost and life gain.

Power Word Feast sometimes gives you huge boosts to kill a minion and charge the Obelisk.

It’s not a top tier deck by any means, but I have found it to be a lot of fun with a lot of variety.

For a little more fun throw a Mindrender Illucia in there. I don’t play it because I feel like I am stuck holding it all too often, but on occasion it can be the game ender in late game, just to give them an empty hand one turn.

I usually mulligan to try to find early game drops just to get something out there to heal, but if you can get a Sethekk or Reader in there that’s the best.

If you have any suggestions please let me know. I am a casual player, but enjoy the game.