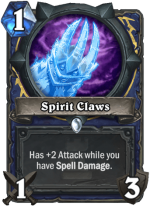 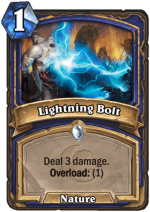 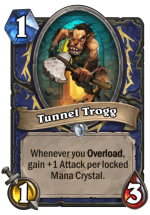 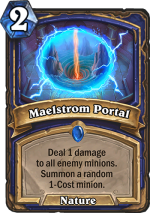 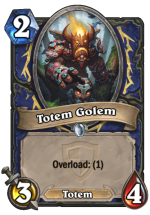 All of these cards are great to get board control early and kill of your opponents minions. Maelstorm Portal is especially good in the Gadgetzan Meta with alot of pirate decks in the ladder. 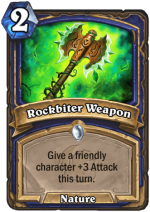 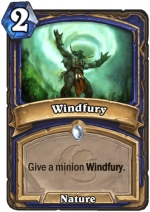 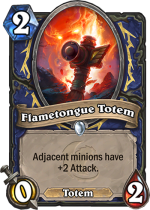 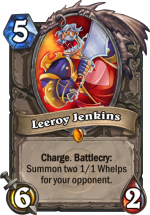 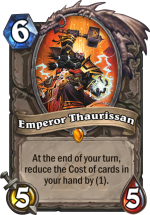 This is what you need for the combo, but i recommend to mulligan for early game board control or plain card draw instead.

The gameplan is to play like a normal mid-range deck at the start of your game, and just try to board clear a lot and gain board control. It’s also important to get your opponents health total under 24 or ideally 18 (or lower). If you have a hard time doing that or if you just meet a lot of Priest or other healers, you can switch out a Jinyu Waterspeaker  for Alexstrasza. If you feel that it’s hard to gain board control, you can switch out the Jinyu Waterspeakers  to Flamewreathed Facelesss or something else with a high statline. When you have a Leeroy Jenkins, Rockbiter Weapon and Windfury in your hand you are ready to do your OTK combo.

Summon your Leeroy Jenkins, buff him with Rockbiter Weapon and Windfury and then kill him. This combo will deal 18 damage. If you started second, you have the mana to buff Leeroy Jenkins with an additional Rockbiter Weapon  with Coin. That will deal 24 damage. Also, you can place your Flametongue Totem adjacent to each other the turn before and then place Leeroy Jenkins between them. That will deal 32 damage with 2 totems or 28 damage with 1 totem and finish most opponents, but it can be hard to make that happen, so don’t focus on that to much. To make your combo easier to accomplish you should try to Emperor Thaurissan your entire combo. If you have Leeroy Jenkins, 2 Rockbiter Weapons, Windfury and 2 Flametongue Totems in your hand when you summon Emperor Thaurissan, you will have the mana to do your 32 damage combo in one turn.

Leeroy Jenkins is the most crucial card in this combo and you defenitely want to craft him if you want to make the deck to show it’s full potential. If you are desprate, you can switch it with Reckless Rocketeer. Bloodmage Thalnos is not that important, but it helps a lot when you want to activate your Spirit Claws or make your board clear harder, better, faster or stronger. You can switch it with Kobold Geomancer. Emperor Thaurissan is really important to have and make your combo much easier to make, but if you have to switch it your should just switch it out with a classic mid-range shaman card like Flamewreathed Faceless or Thing from Below, but i recommend to craft Emperor Thaurissan instead.

It’s very effective to craft golden Leeroy Jenkins to offend you opponent so much that they will rage concede before you even do the whole combo.

Upvote this deck if it helped you out in ladder, that would be very nice 😀