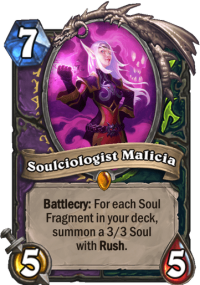 Soul Demon Hunter is a brand new archetype from the Scholomance Academy expansion which leverages the Demon Hunter/Warlock cross-class Soul Fragment mechanic, shuffling 0-mana spells into your deck which are automatically cast when drawn, healing you for two. The synergy cards in the deck rely on destroying one of the Soul Fragment cards to activate a strong Battlecry effect. The deck is a lot slower than the tempo/aggro builds which dominated the Ashes of Outland meta but don’t be fooled by its gentle starts: Soul Demon Hunter has an incredible range of burn and a surprising level of flexibility which makes it a real threat regardless of the opponent it faces on the ladder. Its most notable interaction is with Lorekeeper Polkelt in certain builds, the exciting Legendary minion which guarantees you a string of top-tier draws when played – until you decide to shuffle new cards into your deck, which once again randomizes the order of your topdecks.

This is one of the best decks for Soul Demon Hunter in Scholomance Academy, one which reached top 100 Legend and was also featured in Hearthstone Grandmasters. The deck list might still get changed or refined – if it happens, we’ll update it here!

Spirit Jailer and Soul Shear – These are your primary cards in the mulligan under normal circumstances, and the reason for this is easy enough to understand: you want to make sure your Soul Fragment synergies are online as soon as possible. They are also your most convenient way to impact the board state in the early turns of the game – either by placing a 1 mana 1/3 on the board or removing an early enemy minion.

Manafeeder Panthara – This is the other way you can spend your early turns effectively with Soul Demon Hunter: as it turns out, a 3 mana 2/3 cantrip (you use your 1-mana Hero Power to trigger the Battlecry effect) is good enough for a deck like this. If you run a deck featuring Vulpera Scoundrel, it’s also worth considering as a keep since you have a pretty good idea of the kind of spells you’d like to fish for (hint: almost exclusively draw tools). 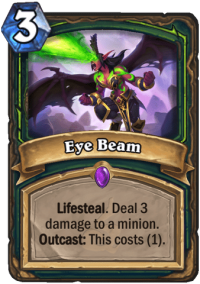 The basics are fairly straightforward: hard-mulligan for removal tools and Soul Fragment synergies, stay alive and get rid of the early threats. What next though? Here’s where the fairly unique, almost midrange-esque approach of Soul Demon Hunter comes into play. What you need to understand in order to efficiently combat these matchups is that your gameplan has to revolve around an eventual burn-based finisher. Unless you can get a large Soulciologist Malicia board to stick (which basically means you’ve won anyway as your opponent ran out of initiative two turns before that point), you will have to eventually leave yourself open to attack as you shift your damage output to the face.

The way you win is by dealing a tremendous amount of damage over the course of two turns, delivering the killing blow just before your opponent can do the same. You can’t merely play for an outlast strategy: this deck (and the Demon Hunter class in general) is ill-equipped for that kind of thing. Aldrachi Warblades coupled with big damage boosters like Soulshard Lapidary can buy you a turn or two extra, but your eye should always be on the prize, which is reducing your opponent’s health total to zero. This is not the kind of deck where you can do enough control-y shenanigans to just get them to concede in frustration. Leave that to Priests. You need to be proactive and finish them off before they overwhelm your defenses.

Shardshatter Mystic is a key part of this plan, and you should try to be as efficient with it as possible. You shouldn’t risk turning your Soul Fragment synergies offline just to get rid of a single minion, no matter how tempting it may be, which is something you’d generally refrain from doing with an area-of-effect removal under other circumstances as well even when it doesn’t come with a small body as a bonus. 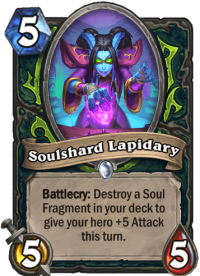 Magtheridon or not, you’re the aggressor here: you don’t have enough threats to contest the long game against Control decks (and something like Bomb Warrior will happily stuff your deck full of explosives if you take long enough), and as potent as your damage output is over the course of a few turns, it’s limited in its overall potential, which means that a Priest can happily heal back up if you give it too much time.

The goal is to manage your mid-size threats appropriately so as to stop your opponents from having too many pressure-free turns to set up their defenses. Though you will struggle to set up scary plays in the first few turns of the match, four to six should be the part where you thrive with various nasty minions and weapons.

Lorekeeper Polkelt allows you to guarantee a Soulciologist Malicia topdeck on a key turn (not that you should expect it to pose a game-winning threat against decks chock full of removal) followed by a Skull of Gul'dan draw of heavily reduced big threats. Just keep in mind that shuffling any Soul Fragments into your deck will reshuffle it in its entirety!

If you don’t have the fancy neutral Legendary, have no fear: Komik’s recent Legend 62 build cuts Lorekeeper Polkelt for a single Immolation Aura and replaces the Manafeeder Pantharas with two copies of Spectral Sight instead. Apart from this adjustment, you only seem to have two flex slots to work with, and your choices are the two-ofs of Vulpera Scoundrel (for added flexibility and a more consistent early game), Battlefiend (again, a more consistent early game) and Glaivebound Adept (added burn and large threats). If you’re going for an aggressive approach with the Battlefiends, you can even cut the Eye Beams for them instead of the Glaivebound Adepts like ShuzoDS did en route to Legend #98.