What a month March has been, right? In 2020, the community has waited two more weeks than usual, but patience has been rewarded in the form of Hearthstone’s most packed content announcement.

The lion’s share of the announcement included the introduction of the upcoming Standard year, the Year of the Phoenix. And while we had to talk about so much other stuff like 2020’s first expansion Ashes of Outland, the addition of the Demon Hunter class, and so much more, we also want to take a closer look at what is about to come in 2020 and the Year of the Phoenix!

As always, the base of speculation is provided by what we call the “expansion teaser triptych”. We could call this image a picture, but its iterations have turned into art by itself over the years, and that is why we have to identify it as such – in this case a triptych, a work of art with three different sections.

One of the major consequences of the content-crammed announcement was that the information about the Standard year had been published together with the reveal of 2020’s first expansion, Ashes of Outland.

In this case, we don’t have to twist our minds about the first chapter of the Year of the Phoenix – because we already know so much about it.

What we can do though is to take a close look at its visual representation as shown on triptych – because that way we may be able to see patterns which could apply to the other two sections.

What instantly catches one’s eye when looking at the Ashes of Outland panel is a fierce tone of green color in the middle.

Even without the knowledge obtained through the recent announcements, proficient Warcraft fans would still have only one association with this particular color: Fel magic.

Fel magic is the opposite of arcane magic and the result of corruption, a state of demonic possession. As it is with all forms of magic in the world of Warcraft, fel magic has a source: Souls.

To execute fel magic, the wielder either has to sacrifice parts of is own self – such as Warlocks and Life Tap – or use trapped souls. The consequences of usage are severe – most individuals connected to fel magic turn into demons eventually.

And that is what happened to Illidan Stormrage, protagonist of Ashes of Outland. Once a noble night elf, he consumed the fel power provided the Skull of Gul’dan and turned into a demon.

Now back to the teaser section: Not only does the green color pose as a dead giveaway towards Illidan; the attached horns on the top and bottom side continue to paint a clear picture.

Last but not least, two fel-colored grates in the corners of the image almost blatantly hint towards the Burning Legion – Sargeras’ deadly demon army that tries to corrupt the world of Azeroth. 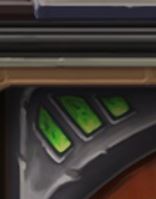 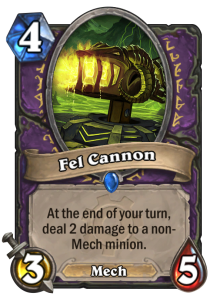 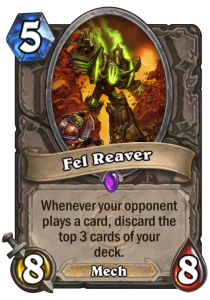 Once they have invaded the lands, the Burning Legion uses mechanical buildings and creations fueled by fel to subjugate their enemies, such as fel reavers and fel cannons, which we already know in the Hearthstone universe.

And although we heard so much about the first expansion and thus can translate that knowledge over to the first section, we have so, so, so many problems deciphering the second part of the triptych.

Over the last two years we’ve always tried to provide multiple ideas when it comes to speculating about the expansion teasers.

The problem in this case is, however, that most of these ideas in this case have already been used. Let’s just take a look at the second image: We see a dark purple color scheme, decorated with golden highlights, shown on what looks like a frayed flag or banner. 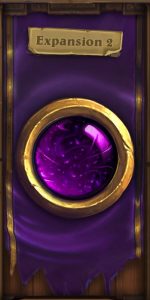 Purple and gold? Oh, the Kirin Tor and Dalaran! Wait, we already had plenty of magery back in 2019. What about Karazhan?! We still remember good old Medivh and the banger of a party he threw for during that One Night in Karazhan.

We know that Hearthstone is the last game that dislikes story and character comebacks, but one has to assume that sequels of any Hearthstone storyline will most likely not appear over the course of 2020.

So what is left? Purple and gold. Very dark purple. Similar to the green of fel, purple often is associated with one and only one thing: The Void.

Way back before Azeroth had seen its first day, there were only the Void and its opposite, the Light. Up to this day, demons and all sorts of other creatures from or connected to the Twisting Nether, an otherworldly realm reigned by the Void itself, used shadow magic to gain power and to spread the influence of the Void.

Now back to the image: While the color purple indicates something involving the Void, everything else really doesn’t.

A banner always connects either to a specific place or a specific faction in the universe of Warcraft. Multiple factions and their respective homelands use purple in their crests, tabards and flags. The Kirin Tor, the Violet Eye, the Arrakoa – only to name a few.

But that specific dark voidly purply in combination with golden highlights, all combined on a banner strongly points towards the race of the void elves – and after meticulous research, we are confident enough to fully support this speculation!

The void elves are high or night elves consumed by the void – however, many of them can control their powers. A prime example would be Alleria Windrunner, Sylvanas’ sister. While her Hearthstone card shows Alleria as a high elf, she has become the first void elf in the lore of Warcraft and leads elves with similar connections to the Void ever since.

The second leader of the void elves, Magister Umbric, has been renown amongst his blood elven colleagues for his studies regarding the Void. However, the leaders of Silvermoon – including their legendary chief researcher Rommath – had enough of Umbric’s questionable intents, and decided to exile him.

Driven by the thirst for knowledge, Umbric and his followers continued to study the Void, and eventually managed to tear a rift into the fabric of time and space. The place behind that rift is called Telogrus Rift, and has become the home and starting zones of all void elves in World of Warcraft.

This storyline has been developed during the later stages of the Legion expansion, and since Patch 7.3.5, the void elves have been an Allied Race of the Alliance. Since then, the story of the void elves hasn’t been explored much further – which is always a good sign in terms of possible new Hearthstone content as well.

Ultimately, we decided to take a closer look at Telogrus Rift and found these intriguing tents:

Purple banners, highlighted with gold! The only thing that they’re missing are frayed ends, but that could be a hint towards a possible conflict within the story of the corresponding expansion.

Tents? On some broken island on the brink of the Twisting Nether? It’s not much, we know that. But the lore of the Void is endless, and the story behind the void elves could turn into the greatest vehicle to tell this lore since the Whispers of the Old Gods.

Now to the third and last part of our beloved triptych. Unlike the first two sections, there’s no real first impression in terms of coloring. The crafted wooden structure around the yellow center doesn’t showcase any particular Warcraft-esque craftsmanship either.

But in the end it’s not Warcraft we have to take our first look at. It is the art of one particular card back that offers a striking similarity: 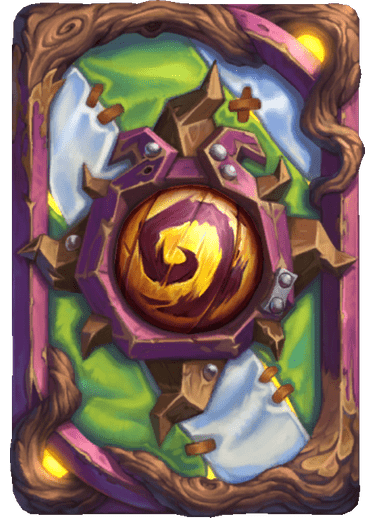 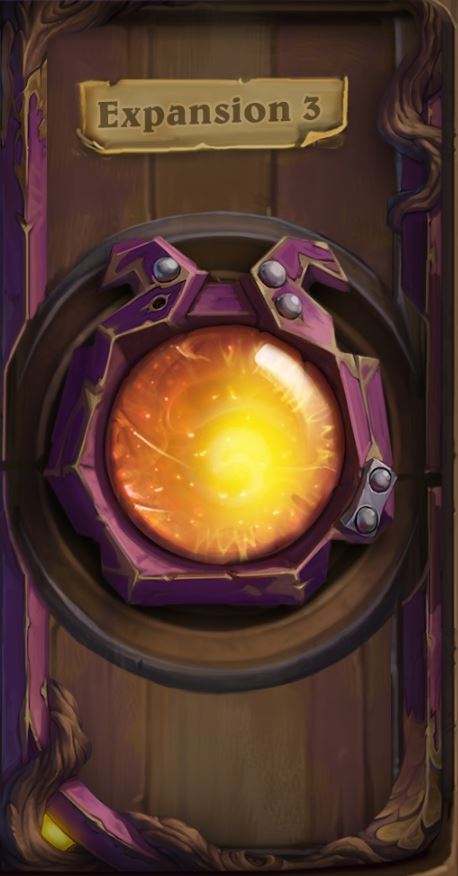 Compared to the third part of our teaser, the Darkmoon Faire card back from October 2019 uses the exact same assets.

What may look like a lazy piece of art at first glimpse could be a nod towards the countless prayers of many Hearthstone players who wanted the Darkmoon Faire to become a theme in the world of Blizzard’s card game as well. But what is the Darkmoon Faire?

This faire event has been in World of Warcraft since the golden Vanilla days, and originally took place every first week of the month in either Elwynn Forest or Mulgore. After the events around a certain black dragon called Deathwing, the faire moved to its own zone called Darkmoon Island. WoW players can complete daily quests in the form of mini games and receive tickets to buy exclusive pets and other in-game rewards.

Many members of the community are convinced that the idea of the Darkmoon Faire – a place for everything that’s too crazy for the rest of Azeroth – catalysed or even kick-started the basic concept of Hearthstone.

One has to wonder how Hearthstone got to stay relevant for half a decade without celebrating the existence of the Darkmoon Faire. The loony theme, the unique characters – Silus Darkmoon in particular – and the countless amusing storylines told by Warcraft’s travelling circus have been waiting to visit the digital card game called Hearthstone since its inception.

And that is why it is a-okay to show a tiny little Darkmoon Faire teaser! Yes, we love speculating, but what we also love is a rough outlook into the far future – in Hearthstone terms at least. Apart from that, art concepts for the last expansion of 2020 are most likely just in the works, so taking existing art about the theme of an expansion that will release in eight months makes total sense.

The Year of the Phoenix – Classics, New Ideas and Fan Favorites

For this year’s teaser, the amount of actual speculation has been as low as never before. Ashes of Outland will be out on April 7th, and we can expect the Darkmoon Faire to end Hearthstone’s year of 2020.

However, there’s still just enough room for taking wild guesses about the second expansion, and a void elf theme could turn into a unique experience that tells the tale of an up and coming storyline of Warcraft lore.

We love the fact that Hearthstone’s artists give us the opportunity to take a small glimpse at the content – may it be close to release or during initial design -, and by the looks of the current teaser triptych, the Year of the Phoenix will provide unique themes and numerous unforgettable stories to tell!