Murder at Castle Nathria expansion will release almost 2 weeks from now, on August 2, but there are still some things to look forward to before it launches.

Theorycrafting Livestreams – Many streamers were invited to join theorycrafting livestreams, where they will be able to test new Castle Nathria decks with some extra rules. Standard players have to run at least 10 Castle Nathria cards and Wild streamers have to run at least a single Castle Nathria Legendary AND 5 other cards from the expansion. This is to ensure that players won’t just take an old deck and add 2-3 new cards, but have to make it more interesting. Twitch Drops will be active across the entire Hearthstone category between July 21 at 9 AM PT (18:00 CET) and July 22 at 7 AM PT (16:00 CET). Watch for 2-4 hours to earn 1-2 Castle Nathria packs. In addition, players participating in the event were given Castle Nathria Mega Pre-Purchase Bundle codes to give away during their streams, so you might catch one of those! Theorycraftings will happen on streamers’ individual channels, you can probably check their social media to see if they attend.

Dramatic Tale of Murder Most Foul – On July 22 at 10 AM PT (19:00 CET), you can open the official Hearthstone Twitch channel and join the murder investigation. Hearthstone content creators, casters and devs will act out the Murder at Castle Nathria mystery script. Drops will also be active – watch the stream for 30 minutes to earn one Murder at Castle Nathria pack. Be sure to join it early, though, as the stream will end shortly after the performance and it might be impossible to get your 30 minutes if you start watching after the performance has already started.

Pre-Release Weekend – While live, public Fireside Gatherings still aren’t open, you can create your own Private Fireside Gathering between July 29 at 10 AM PT (19:00 CET) and August 1 at 10 AM PT (19:00 CET). There, you can open your packs early (so you can jump straight into the action when the new set launches) and play a couple of unique Tavern Brawls (your friends can join your Gathering if they’re connected to the same network).

Interestingly, we’ve also learned that your copies of Murloc Holmes and Golden Copies of Sire Denatherius will be eligible for full Dust refunds until August 5 at 10 AM PT. It means that they are the new Legendaries you can get from rewards track. Sire Denatherius will most likely be a Level 1 reward, while a Diamond Murloc Holmes is a Level 1 reward with Tavern Pass. The refunds are made so you won’t feel bad after first opening them in the pack and then getting them for free first thing after expansion launches. Because of the refunds, it’s worth trying to open your packs BEFORE claiming your free Legendaries. This way if you hit one of them, you get a “free Legendary of your choice” ticket in a form of 1.6k / 3.2k (normal/golden) Dust.

Join us, starting on July 21, for the first investigations of the gameplay for Hearthstone’s upcoming expansion, Murder at Castle Nathria! In these theorycraft livestreams, your favorite Standard and Wild content creators are coming together to search for clues as to what the new expansion has to offer. 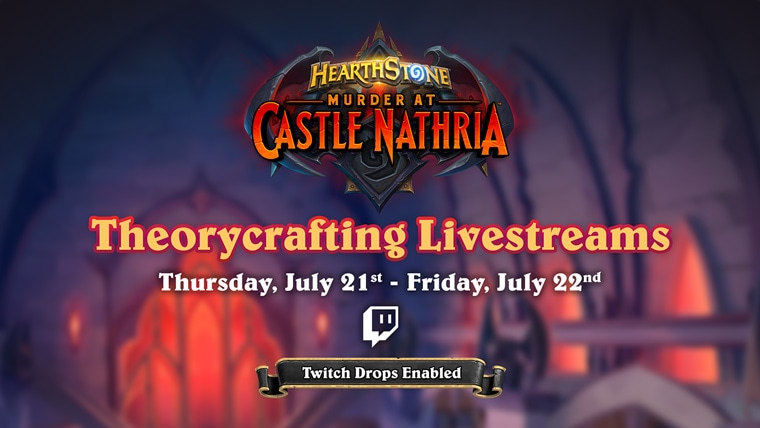 Invited players will be streaming their participation on their own personal streams, so make sure that you’re following your favorite Hearthstone content creators and tune in when they go live during the following time periods:

* Players in these regions will pick one of the two time slots. All Wild participants will be playing during the Europe/Americas time slots, regardless of their region. 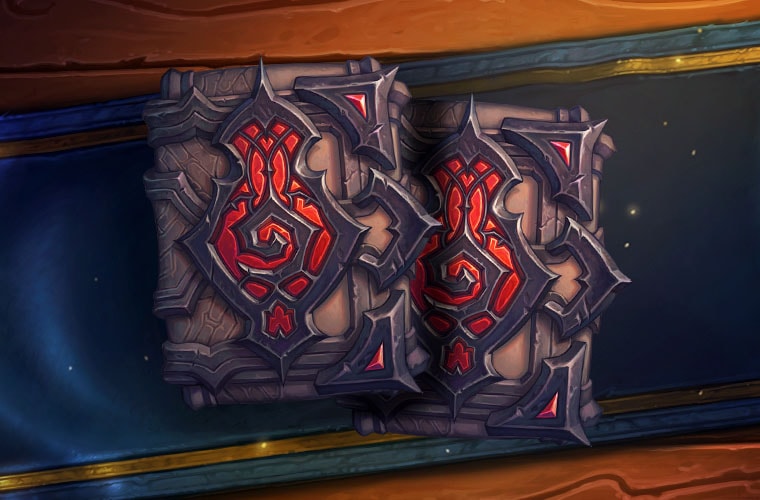 From July 21 at 9am (PT) to July 22 at 7 am (PT), watch a total of 2 hours of any stream across the Hearthstone category to earn 1 Murder at Castle Nathria card pack! Watch for another 2 hours and earn a second Murder at Castle Nathria card pack! Card packs will be locked until the expansion launches on August 2. You must link your Twitch and Battle.net accounts in order for your time watch to award drops. Here’s how:

Watch the Dramatic Tale of Murder Most Foul

On July 22, after the theorycrafters make their findings, join another selection of your favorite Content Creators, Casters, and some of our very own Hearthstone developers as they act out the Murloc Holmes and the Murder at Castle Nathria mystery script! Featuring:

You can tune in to the official Hearthstone Twitch channel at 10 a.m. Pacific on July 22 to listen in, and you can join in the investigation by following along from home. Audience participation is encouraged! Watch for 30 minutes and you’ll earn another Murder at Castle Nathria card pack. Make sure you tune in early; this broadcast and its drops period will end shortly after the dramatic reading is over.

You can open your Pre-Purchase packs early at a private pre-release Fireside Gathering the weekend before Murder at Castle Nathria goes live on August 2. Private pre-release Fireside Gatherings can take place between July 29 at 10 am (PT) and August 1 at 10 am (PT). In the event that you should open them in your pre-release packs, Murloc Holmes and Golden copies of Sire Denathrius will be eligible for full dust refunds until August 5, at 10am (PT).

Head over to FiresideGatherings.com to register your private event!

In light of the ongoing health risk associated with in-person gatherings, the ability to create public events is still disabled.

Private Fireside Gatherings will NOT: