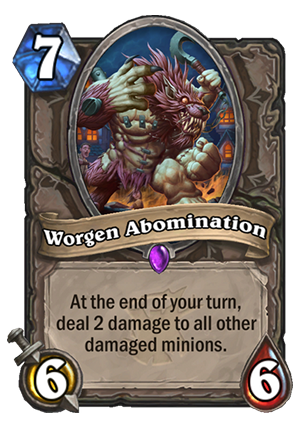 Worgen Abomination is a 7 Mana Cost Epic Neutral Minion card from the The Witchwood set!

At the end of your turn, deal 2 damage to all other damaged minions.

It’s not the Sleep with the Fishes replacement Warrior has needed… To be fair, this card doesn’t even remind me of Sleep. It’s kind of like a conditional Baron Geddon with a slightly better stat-line. However, I’m not a big fan of it.

This feels like a Warrior card, but might not actually be best in Warrior. Yes, it seems like the obvious choice because of the Whirlwind effects, but Baron Geddon is often just as good in those decks while not requiring any sort of activator. If you have minions on the board and you play Whirlwind, it will damage your minions too anyway, so why play it over Geddon? The only reason I see is the 6 health, which is harder to remove than 5 health, but that’s about it. It might be tried out, people might experiment with it a bit in Warrior, but ultimately I feel like it’s not going to be good enough.

Where this card might be played are decks that can damage opponent’s minions while leaving their own minions intact. A great combo would be, for example, with Maelstrom Portal. If your minions have full health, it wouldn’t hit them, so it would only damage opponent’s stuff for 2. But Portal is rotating out. You can still add 2 extra damage to Lightning Storm, but it’s not that good.

You could also theoretically combo it with something like Arcane Explosion in Mage, but it’s not like Mage desperately needs more late game AoEs (it’s quite the opposite, actually, there are too many AoEs in Mage and no space to put them). Or maybe with Fan of Knives in Rogue, but that’s also very slow. Hunter could use Unleash the Hounds, but that’s a 10 mana combo… in Hunter… I can’t really see it.

Remember that unlike Geddon, which you can drop by itself, this usually has to be combined with something else, unless your opponent already has a few damaged minions on the board (which is of course not always the case).

Theoretically you could also try it out in a deck that plays lots of small/token minions – you trade those small things off and play this guy, dealing lots of extra damage to the opponent’s board and having a pretty threatening 6/6 body.

All in all, most of those things could already be achieved with Baron Geddon, yet it didn’t see almost any play in the last 2 years or so. Only Big Spell Mage is running it (not always), but that’s because of the synergy with Frost Lich Jaina. It’s a decent card, but I don’t feel like it’s good enough to see Constructed play.