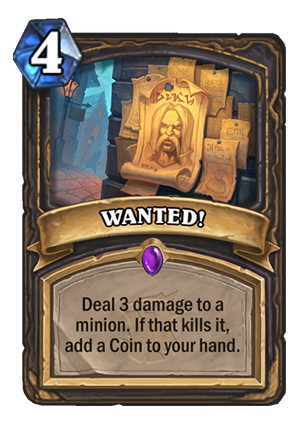 WANTED! is a 4 Mana Cost Epic Rogue Spell card from the The Witchwood set!

Deal 3 damage to a minion. If that kills it, add a Coin to your hand.

One thing for sure – if there is a class that can utilize Coins (or other 0 mana spells) best, it is Rogue. But still – 4 mana for 3 damage? Limited to minions? That’s got to be some sort of cruel joke.

The first point of comparison I have is Tomb Pillager. THAT is an example of a strong card, which gives you Coins. Simply because you pay for a vanilla 4-drop stats and get an extra effect. Tomb Pillager would be much worse, but possibly still playable as a 4/3 – you’d pay for 3 mana worth of vanilla stats + Coin. But this card is EVEN worse. “3 damage to a minion” is an effect worth 2 mana, or actually even less – other 2 mana 3 damage cards can either go face or have more flexibility (e.g. Wrath can also draw). Then you get a Coin. And it’s still not worth 4 mana no matter how you look at it. This is like making Tomb Pillager a 3/2 or something. It MIGHT still be played in the decks that desperately need Coins, but it just wouldn’t be good.

I won’t completely dismiss it, as it’s still Rogue and Coins, but… I just feel like this card should be priced at 3 mana. At 4 mana, it has to be compared to cards like Flanking Strike (3/3 on the board is much better than Coin in the hand, even Coin in Rogue), or even Hammer of Wrath, which gives you the card immediately (yay, you don’t have to wait for Auctioneer to cycle it!) and is… a pretty weak card.

Even though the card is pretty bad, it might still be playable. Why? Because Miracle Rogue desperately needs more ways to generate Coins. They’re the main Gadgetzan Auctioneer fuel, and even if this card is subpar, it might still be used just because of that. Other than that, it might be used in some Combo Rogue deck, which simply NEEDS the coins to perform the combo. I like this card flavor-wise, but I think it’s on the weak side. I’m giving it 3 out of 10 ONLY because of how well Rogue combos with Coins.