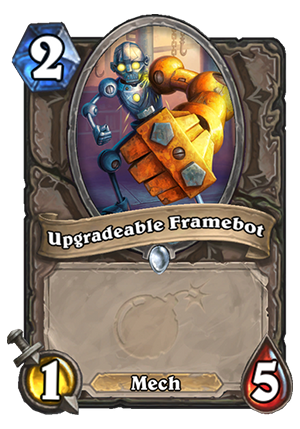 Usually, a vanilla minion with no interesting effect is just a pack filler. Just a variation on already existing stuff, just with another stat distribution. This, however, is a bit different. Not only it has above vanilla stats (vanilla 2-drops have 5 stats in total, this has 6), but the distribution makes it incredibly durable. 5 health is very hard to take down so early in the game, meaning that this minion will stick most of the time when dropped on the curve.

I’ve seen a lot of players comparing it to the Dire Mole of a new set, and it’s somewhat true. Vanilla early, Neutral minion with low Attack, high Health and a tribal tag. Dire Mole was a Beast, which mostly benefited Hunter (and Druid while Mark of Y'Shaarj was still in Standard). This has a Mech tag, which is really hard to judge yet, as we don’t know many cards from the set. But I’d argue that if we ignore the tribe synergies, as a standalone card, it is weaker than Dire Mole. 1 attack on Turn 1 is much better than 1 attack on Turn 2, as it trades favorably into lots of other 1-drops. 1/5 stats, however, don’t work that well against the 2-drops. Let’s say a common 2/3 stat-line (such as Plated Beetle or Arcanologist) – while they would trade with each other, it would take 3 entire turns to do it.

That said, the stats of this card basically scream “buff magnet”. Even simple attack buffs such as Blessing of Might (4/5) or Cold Blood (5/5) can turn this minion into a deadly force. On top of that, that’s where the Mech tag comes handy. It’s clear that the main purpose of this card was to be a strong body to buff with Magnetic Mechs. 1/5 isn’t that scary, but if if you turn it into a 3/7 with Deathrattle after using Spider Bomb on it, now that’s a strong minion to have on Turn 3.

The card would be amazing in a Prince Keleseth deck, but you can’t play both of those for obvious reasons. That’s one of the reasons why I don’t think that it will necessarily find its way into lots of Aggro decks. Keleseth is a pretty big deal in lots of those. On the other hand, other Aggro decks such as Odd Paladin or Odd Rogue (which would play the Attack buffs I’ve mentioned above) can’t play it for another reason – it’s even-costed. So while it MIGHT see some play in Aggro decks, it’s probably not going to be a staple you will see in every build. 1 attack on Turn 2 just doesn’t put enough pressure if you can’t capitalize on it with buffs, and most of the Aggro decks can’t. Maybe after Keleseth is gone and non-Odd Aggro decks will look for ways to fill the 2-drop slot. Or maybe if some more buff-oriented Zoo-like deck pops out. But it doesn’t look like a Dire Mole or Fire Fly 2.0 for me.

On the other hand, it will definitely find its way into Mech decks. Okay standalone card, Mech tag for the potential synergies and solid body to drop Magnetic minions onto. Very good card in Mech decks, possibly okay in other Aggro builds if they can consistently buff its attack.