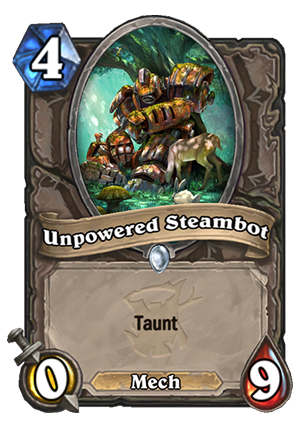 Unpowered Steambot is a 4 Mana Cost Common Neutral Minion Mech card from the The Witchwood set!

Generally, Taunt minions benefit from a low attack / high health stat distribution, but there is also a tipping point. If you go below a certain attack threshold, the Taunt’s main function – blocking damage WHILE TRADING into your opponent’s minions – will vanish. Yes, it will block damage, but it won’t do anything besides it. That’s why Mogu'shan Warden, even though it has 7 health and a Taunt for 4, is one of the worst cards in the entire game. This one looks similar. At 0 attack, and yes, I repeat, 0 attack, if you just drop it on Turn 4, it will soak some damage and die. It’s like gaining 9 Armor or something. Definitely far from perfect.

Even a Combo Priest (Divine Spirit + Inner Fire) wouldn’t like to play it. Unlike other Taunts, which might stick because your opponent doesn’t want to throw their whole board into it, this will always get as much damage as possible depending on your opponent’s board. So if he has 5 damage on the board, it will be a 0/4 going into your turn. While it MIGHT sometimes work, I didn’t really see Priests running Mogu’Shan or Oasis Snapjaw just because those cards had lots of health.

Shieldbearer, which has even better stats for its mana cost, sees zero play. So I don’t believe that this will see any play too.