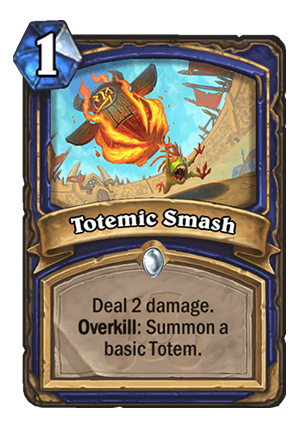 Trolls are the first group to have a totem survive atmospheric re-entry.
Tweet

Totemic Smash is just a solid card. Deal 2 damage to anything for 1 mana is good enough to see play, something that has been proven time and time again by cards like Holy Smite or Arcane Shot. And those don’t have any upside.

While Overkill on this card isn’t particularly powerful, it doesn’t have to be. The card is already good and it’s a sort of bonus. It usually feels bad to “waste” a 2 damage card on a 1 health minion, but sometimes that’s just what you have to do. This will let you do it without feeling bad, as you will get a random Basic Totem for your troubles. Also, if you roll +1 Spell Damage Totem before playing this, you can also clear 2 health minions while summoning a new Totem. On the other hand, this bonus is not big enough for you to regret missing it. If your opponent has a 2 health minion and you have this in your hand, you just throw it and remove it for 1 mana – that’s good!

One thing worth mentioning in particular is that any cheap burn spell can be crucial in Malygos strategy. You can already summon it with Eureka!, but you could only damage your opponent for cheap with Lightning Bolts and Frost Shocks before, the latter was pretty weak in matchups in which you didn’t need the combo, like vs Aggro.

As an extra note, the summoned totem is completely random and you CAN get a second copy of a totem you already have on the board, which can come handy sometimes.

Overall it’s a good card and it will probably see some play – either as an early game tempo removal or as a combo piece.