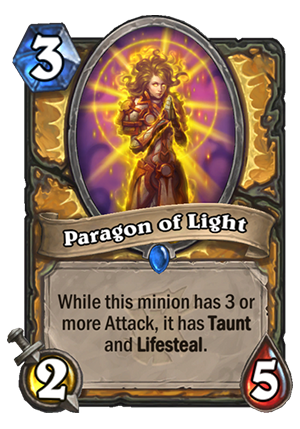 Paragon of Light is a 3 Mana Cost Rare Paladin Minion card from the The Witchwood set!

While this minion has 3 or more Attack, it has Taunt and Lifesteal.

She’s all fun and games until someone rings that stupid bell.
Tweet

Seems like a card with high potential, but it might be a bit hard to activate it.

Let’s start with the stats. 2/5 for 3 is a good stat-line. While it’s low on the Attack side, the high health makes it difficult to remove. At the same time, let’s remember that it starts off as a vanilla minion, with no extra effects, which means that you want to drop it by itself only if you’re pretty sure that it will survive or you need to contest the board right away.

Now let’s talk about the upside. Lifesteal by itself is not that great. To be honest, no Lifesteal minions has seen play ONLY because it has Lifesteal. However, Lifesteal + Taunt is probably the best combination, as your opponent will often be forced to bump a few minions to take it down, healing you for lots of health.

But how easy it is to activate the effect? Since it starts at 2 Attack, all you need to do is give it +1 Attack. You can either do it permanently through a buff, or temporarily through e.g. a minion like Dire Wolf Alpha, but the buff option is more probable. Even a simple Divine Strength is enough to make it a 3/7 Taunt with Lifesteal. It also curves nicely into Blessing of Kings, which would make it a massive 6/9 Taunt with Lifesteal on Turn 4.

Biggest issue I have with this card is that such stat-line and effect seems to fit into a Control deck. But Control decks don’t really play buffs other than Spikeridged Steed, which already gives minion Taunt, so it’s a bit counter-productive. On the other hand, faster decks, those that play cheaper buffs or buffs that don’t give Taunt (e.g. BoK), those decks don’t really take advantage of this kind of effect.

In Wild, I could totally see this in a handbuff Paladin deck. Just after +1/+1, it becomes a 3/6 Taunt with Lifesteal for 3 mana – pretty insane in faster matchups where the healing can be good.

In Standard? Really hard to say. If Buff Paladin will become a thing, like the Quest version, it might make sense. Or maybe if some kind of Midrange Paladin running other buffs than Steed pops out.

In the end, the card might be really strong in the right deck, but I feel like there might be no deck it will fit into (in Standard, at least).