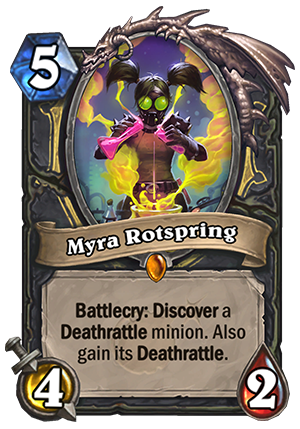 Myra Rotspring is a 5 Mana Cost Legendary Rogue Minion card from the The Boomsday Project set!

On her first day on the job, Myra removed the smoke detectors.
Tweet

Deathrattle is one of the Rogue’s theme this expansion, it’s clear at this point. And this seems like a great support card for such an archetype. While the stat-line is very weak (5 mana 4/2…), the effects kind of make up for it. 4/2 body is worth around 2.5 mana, Discovering Deathrattle is worth like 1 mana (Journey Below), so you need around 1.5 mana worth of Deathrattle effect on average for this card to be worth it in theory. Well, maybe a bit less, because combining different effects always costs a little extra. It’s hard to realistically calculate the value of Deathrattle effects. If you end up with Cairne Bloodhoof, then well, it’s an extra 4/5 once this one dies, so the effect is worth a few points of mana. But then, there are more complex, situational stuff, like Rogue’s new Blightnozzle Crawler. Sometimes it can be worth lots of mana if you clear a big minion, and sometimes it might be nearly useless, as you opponent clears it on his turn and pings the 1/1.

The thing I don’t like about pushing Deathrattle theme in Rogue is that Rogue needs tempo. The class has no little to no defensive tools, healing and such and Deathrattle cards are generally slow. They have more value in the long run, but the initial bodies are kind of bad. Just like this one – in what world could you drop a 5 mana 4/2, as Rogue, against Aggro decks?

Another downside is that Rogue doesn’t have amazing Deathrattle minions, and Discover has 400% chance to get class stuff. If Rogue had two or three broken Deathrattle cards, then taking their effects and Discovering them would have extra value. As for the Neutral stuff, despite it being a Discover effect, there are simply so many different effects, weak or strong, that it might not be very reliable.

If it costed 1 mana less, or was a 4/4, or something like that, then it would be really powerful. But right now the initial stats / mana cost ratio might be keeping it from seeing play. For Rogue, a 5+ mana minion either needs to be high tempo or have a broken effect to see play. That’s how the class works right now – it just doesn’t have enough sustain or comeback mechanics to play slow cards. It still might see play in Deathrattle deck, but I don’t believe that it will be a card that carries the deck.