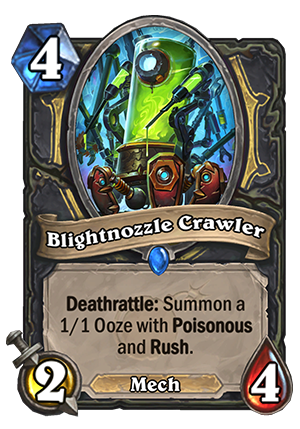 Deathrattle: Summon a 1/1 Ooze with Poisonous and Rush.

"Well we HAD it contained. Then you went and gave it legs!"
Tweet

The stats on this card are… underwhelming. 4 mana for a 2/4 minion is just so, so slow. I don’t believe that Rogue is getting lots of Mech synergies this expansion, so the Mech tag might not matter too. The only interesting part of this card is Deathrattle, basically.

Summoning a 1/1 with Poisonous and Rush is really strong. It basically kills any minion you choose, unless it’s hidden behind a Taunt. That’s powerful, but only on your own turn. That’s the main problem. If it dies on your turn, you immediately clear something with the 1/1. But if it dies on the opponent’s turn, he most likely just pings the 1/1 or throws in some small minion to trade it, leaving his big guys unharmed. And let’s be honest, starting from Turn 4, a 2/4 minion is not very hard to clear.

The only way for this card to see more play would be if Rogue got more Deathrattle synergies, especially some easier ways to trigger them. Like, imagine if it was a Hunter card and you could trigger it more reliably with Play Dead and Terrorscale Stalker. It would look much better. Maybe if you Carnivorous Cube it, but then again, you don’t want to run Cube in a deck that doesn’t have lots of synergies (you definitely DON’T want Cube just for this card). Right now, it’s just much better to run a Vilespine Slayer. Sure, it’s a combo card, but it’s a) more consistent and b) instant.

Maybe in Wild there will eventually be enough Deathrattle synergies for Rogue to make one viable deck, who knows.

Card rating: 3/10, possibly more if some Deathrattle synergies get printed