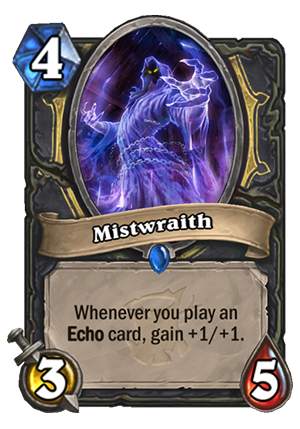 Mistwraith is a 4 Mana Cost Rare Rogue Minion card from the The Witchwood set!

One little Mistwraith sitting in a tree. M-I-S-T-I-N-G.
Tweet

Cool card, but I don’t think that it will see play even if for one simple reason – there are already similar Classic cards that have seen play in Miracle in the past, and I feel like they’re better than this one.

First one is Questing Adventurer. It also gains +1/+1 every time you play a card, but it’s not limited to Echo cards. Yes, it starts as a 2/2 as opposed to 3/5, which is quite a big difference, but it also costs one mana less, so it’s easier to start comboing it, and dropping it on Turn 3 with Coin or Preparation + something. Questing’s HUGE strength is that it gains stats from those 0-1 mana cards like Backstab, Coin, Prep etc. AS WELL AS the Echo cards. So while it starts lower, it’s very easy to catch up and then to get ahead of Mistwraith.

And the second card is Violet Teacher. This one is also a 4 mana 3/5 that activates its effect when you play a certain type of cards. But I think that it’s safe to say that Spells are more common than Echo cards. Rogue Echo cards are spells anyway, so it will proc from them, and again, it will also proc from a bunch of other cards. I’d say that value of +1/+1 and a 1/1 is quite comparable and mostly depends on the matchup and situation. E.g. it’s better to get +1/+1 against Defile, and it’s better to summon 1/1 against a single target removal.

While I could see running this over Questing (as it has a bigger initial body, so you COULD drop it on Turn 4 without any other cards, unlike Questing, which needs to be combo’d with at least 1 or 2 cards right away), I don’t see the reason to play it over Violet Teacher. Teacher’s effect is easier to proc. And anyway, neither Questing, nor Teacher have seen play in Miracle Rogue in a while already.

The fact that this card costs 4 mana makes is a bit awkward. The cheapest Echo cards revealed so far cost 2, so if it was e.g. a 4/6 for 5 mana, it would make more sense. Right now, when you drop it on T4, you can only follow it up with 2 Echo cards and float one mana. If it was a 5-drop, you could follow it up with three Echo cards and not float any mana. Also, Rogue already has a card it wants to play on Turn 4 (Fal'dorei Strider) and no real 5-drop (Vilespine Slayer is not really a 5-drop).

All in all, it’s not really a bad card by any means, but I just feel like it pales in comparison with the currently available tools.