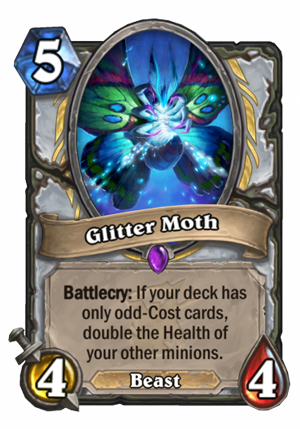 Glitter Moth is a 5 Mana Cost Epic Priest Minion Beast card from the The Witchwood set!

Battlecry: If your deck has only odd-Cost cards, double the Health of your other minions.

This card is pretty weak. I think it’s around the level of Stagg – it has a higher potential, but a WAY worse “worst case scenario”.

So, the thing is, doubling health of all of your minions is great effect. But, since the minion costs 5 mana, it’s not exactly very flexible. You will rarely be able to play a big minion and buff it on the same turn.

It seems like it would fit into some sort of Combo Priest with Divine Spirit + Inner Fire, but no, it really wouldn’t. Not only can you not run Divine Spirit (even cost), but also cards like Radiant Elemental or Shadow Visions.

If the Dragon package will still be a thing after Drakonid Operative is gone, it definitely won’t be a thing with this card. Twilight Drake, Duskbreaker and Primordial Drake are all even cost, so Dragon package is out of question.

Other even cost cards that you will need to sacrifice are Auchenai Soulpriest + Circle of Healing (with Shadow Word: Horror gone, we might be back to the Auchenai combo for the clears), Shadow Word: Pain, Eternal Servitude (it’s not like you’d want to play it in Big Priest anyway, but hey), Silence, Free From Amber, Mind Control.

So here’s the thing – in what kind of deck would this see play? My only guess would be some board-based, Tempo Priest? Something similar to the current Spiteful Dragon Priest? But Odd deck means that you can’t play either Dragon package or Spiteful Summoner (not to mention Grand Archivist or Big Spells). Cards that would fit a deck like that, e.g. Drakonid Operative or Kabal Talonpriest are also rotating out.

As much as the upgraded Hero Power might come handy sometimes, I just can’t find any good use for this card. Really. I’ve read somewhere that it combos nicely with Void Ripper. You stick a high health board and then drop both on Turn 8 for a massive damage swing. But how good would it actually be? Most of the high health minions that you could stick are either Even cost or are rotating out.

If you want to play Midrange/Tempo deck and just use it to buff your minions, to make your board stronger, then you’d most likely have to sacrifice too much, not to mention that with the current cards, it’s just impossible to build such a deck on the odd-cost shell. At the same time, if you play a Combo deck, you’d be better off just playing Divine Spirit – it’s more flexible, easier to combo and easier to draw (Shadow Visions). This is one of those cards that might seem strong when you first look at it, but it’s just too unreliable to realistically work. They would need to REALLY surprise me with the upcoming Priest reveals for this card to make sense. The thing is, EVEN if you build an Odd Priest, you might still not want to play this card if you go for a Control-oriented build (which feels to be the right way with the upgraded Hero Power). 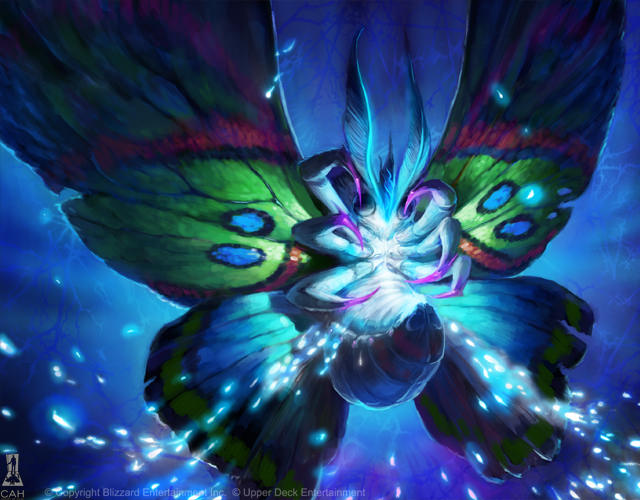